“In obedience to our promise” 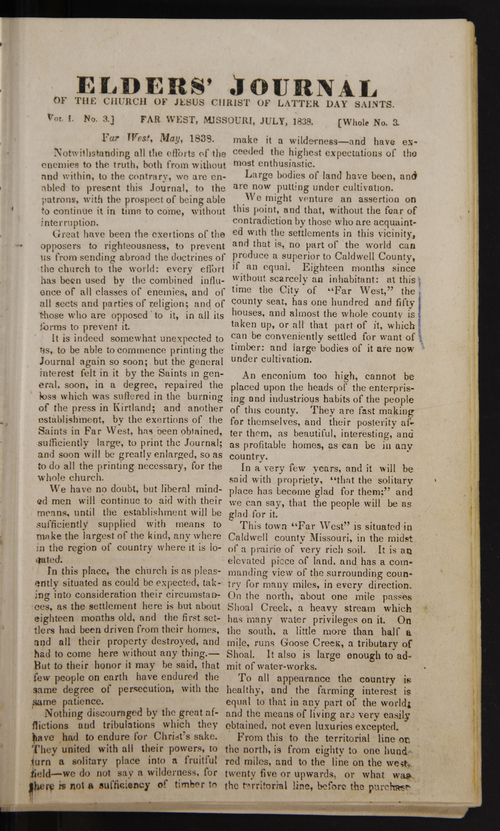 In obedience to our promise, we give the following answers to questions, which were asked in the last number of the Journal.

Question 1st. Do you believe in the bible?

Answer. If we do, we are the only people under heaven that does. For there are none of the religious sects of the day that do.

Question 2nd. Wherein do you differ from other sects?

Question 3rd. Will every body be damned but Mormons?

Answer. Yes, and a great portion of them, unless they repent and work righteousness.

Question 4th. How, and where did you obtain the book of Mormon?

Answer. Moroni, the person who deposited the plates, from whence the Book of Mormon [42] was translated, in a hill in Manchester, Ontario County New York, being dead, and raised again therefrom, appeared unto me, and told me where they were; and gave me directions how to obtain them. I obtained them, and the Urim and Thummim with them; by the means of which, I translated the plates; and thus came the book of Mormon.

Question 5th. Do you believe Joseph Smith Jr. to be a prophet?

Question 6th. Do the Mormons believe in having all things common?

Question 7th. Do the Mormons believe in having more wives than one.

Answer. No, not at the same time. But they believe, that if their companion dies, they have a right to marry again. But we do disapprove of the custom which has gained in the world, and has been practised among us; to our great mortification, of marrying in five or six weeks, or even in two or three months after the death of their companion.

We believe that due respect ought to be had, to the memory of the dead, and the feelings of both friends and children.

Question 8th. Can they raise the dead.

Answer. No, nor any other people that now lives or ever did live. But God can raise the dead through man, as an instrument.

Question 9th. What signs do Jo Smith give of his divine mission.

Answer. The signs which God is pleased to let him give; according as his wisdom thinks best: in order that he may judge the world agreably to his own plan.

Question 10. Was not Jo Smith a money digger.

Answer. Yes. But it was never a very profitable job to him, as he only got fourteen dollars a month for it.

Question 11th. Did not Jo Smith steal his wife.

Answer. Ask her; she was of age she can answer for herself

Question 12th. Do the people have to give up their money, when they join his church.

Answer. No other requirement than to bear their proportion of the expenses of the church, and support the poor.

Question 13th. Are the Mormons abolitionists.

Answer. No, unless delivering the people from priest-craft, and the priests from the power of satan, should be considered such.—But we do not believe in setting the Negroes free.

Question 14th. Do they not stir up the Indians to war and to commit depredations.

Answer. No, and those who reported the story, knew it was false when they put it into circulation. These and similar reports, are pawned upon the people by the priests, and this is the reason why we ever thought of answering them.

Question 15th. Do the Mormons baptize in the name of Jo Smith.

Answer. No, but if they did, it would be as valid as the baptism administered by the sectarian priests.

Question 16th. If the Mormon doctrine is true what has become of all those who have died since the days of the apostles.

Answer. All those who have not had an opportunity of hearing the gospel, and being administered to by an inspired man in the flesh, must have it hereafter, before they can be finally judged.

Question 17th. Does not Jo Smith profess to be Jesus Christ.

Answer. No, but he professes to be his brother, as all other saints have done, and now do.—Matthew, 12: 49,50—And he stretched forth his hand toward his disciples and said, Behold my mother and my brethren: For whosoever shall do the will of my father which is in heaven, the same is my brother, and sister, and mother.

Question 18th. Is there any thing in the Bible which lisences you to believe in revelation now a days.

Answer. Is there anything that does not authorize us to believe so; if there is, we have, as yet, not been able to find it.

Question 19th. Is not the canon of the Scriptures full. [43]

Answer. If it is, there is a great defect in the book, or else it would have said so.

Question 20th. What are the fundamental principles of your religion.

Answer. The fundamental principles of our religion is the testimony of the apostles and prophets concerning Jesus Christ, “that he died, was buried, and rose again the third day, and ascended up into heaven;” and all other things are only appendages to these, which pertain to our religion.

But in connection with these, we believe in the gift of the Holy Ghost, the power of faith, the enjoyment of the spiritual gifts according to the will of God, the restoration of the house of Israel, and the final triumph of truth.