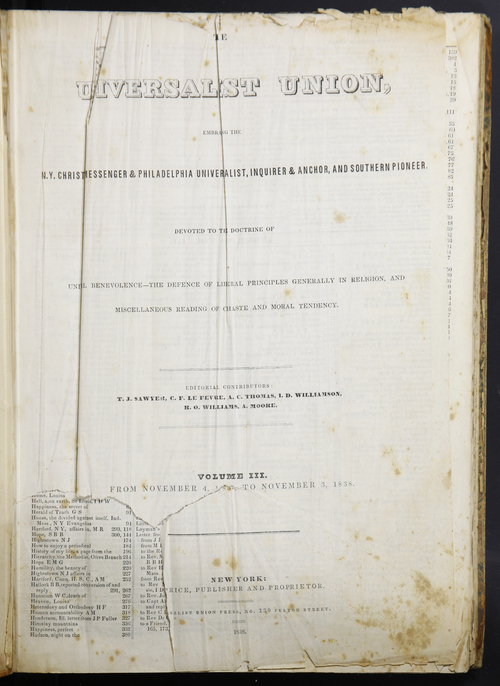 This is the title of a small pamphlet by LA ROY SUNDERLAND, a Methodist preacher and editor of some notoriety in this city. It is but a glance at this new form of crime and folly, of hypocrisy and fanaticism, and yet it gives a very good idea of its pretensions and character.

Some of the ministers of this new system, if system it may be called, have been laboring with considerable success in this city during the past winter; and if our information is correct, they have found the most congenial soil in the bosom of Methodist churches for the reception of Mormonism. It may be assumed as a matter of unquestioned fact, we presume, that Mormonism will gain some converts in every neighborhood over which the fires of modern revivalism have passed. It is but one remove from the fanaticism and folly sometimes exhibited in these revivals.

Its ministers need therefore only a superior degree of effrontery and impudence, of pretension to sanctity and inspiration, in order to succeed.

We think Mr. Sunderland has done the community a service in his little book. We are happy to see him take so common-sense a view of the subject, a view that commends his pamphlet at once to the understanding and approbation of his readers.

But we are especially pleased to hear Mr. Sunderland condemn the spirit of cruelty which Mormonism breathes, in common with almost every other religion of merely human origin. Let us quote a passage. Our author says that “the book of Mormon institutes new conditions of salvation:—

‘And whoso believeth not in me and is not baptized shall be damned.’ p. 478.

‘Behold, I say unto you that he that supposeth that little children needeth baptism, is in the gall of bitterness and the bonds of iniquity: for he hath neither faith, hope nor charity; wherefore, should he be cut off while in the thought, he must go down to hell.’ p. 582.

“The curse of God is denounced upon all who reject the nonsense contained in the book of Mormon:

Mr. Sunderland has a whole chapter on the unrelenting cruelty of Mormonism. His closing paragraph in this chapter we must copy entire.

“The unrelenting and monstrous cruelty of Mormonism is seen, again, in its pretending to consign all to hell; who do not believe it. We know, its advocates pretend to explain this horrible dogma of their creed, by saying that those only are sent to hell who reject their testimony, after they have had an opportunity of either reading it or hearing it preached. But this explanation does not save those who die in the belief of infant baptism, and all such the book of Mormon informs us are consigned to the miseries of everlasting damnation. Here, therefore, we have the perfection of cruelty, cruelty unmixed, and unequalled by any system of heathenism that ever cursed the world.”

These statements and remarks of our author demand a passing notice, indeed, they deserve very serious attention.

1. In the first place, it is very worthy of remark that the author of Mormonism was a thorough believer, or, at least, pretended to be a thorough believer in the doctrine of endless misery—a doctrine which is generally regarded as of a very sacred and important character, and unspeakably beneficial in its moral influence in the world. He not only believed it, but he well knew how to use it, and render it subservient to his purposes. Hence he “deals damnation round the land” with as much freedom and sang froid, and almost as good grace, as any of his clerical neighbors. his success shows conclusively that this instrument is not inefficient in his hands. The fifty thousand converts of whom Jo. Smith jr. boasts, are an evidence that the doctrine of an endless hell is able to build up Mormonism as well as Mahometanism, or Catholicism, or Presbyterianism, or Methodism. Without this doctrine, we suspect neither of these isms would boast the numbers that are now embraced in them. It is, we believe, the main-spring of them all, and they would all alike fade away and become extinct without its life giving power.

2. It is deserving our consideration that the doctrine of endless misery, moral and sanctifying as its influence is generally supposed to be, has not been able as yet to make even a tolerably honest man of Joseph Smith, jr. the author of Mormonism. The book of Mormon, and the system it contains, are evidence enough that Smith is a thorough going scoundrel, too lazy to dig, and too ignorant to succeed in any honest calling without the labor of his hands—a man who by the testimony of his neighbors was a cheat and a liar, intemperate and quarrelsome, in short, entirely destitute of moral character, and addicted to vicious habits. His book and his labors as a preacher and a prophet are all directed to one end, the imposing upon his fellow men for selfish purposes. The moral doctrine of endless misery is, at bottom, the all in all of the means employed in this unprincipled and wicked enterprise. “Whoso believeth not in me and is not baptized, shall be damned.”

3. We are surprised, as well as pleased with Mr. Sunderland’s complaints of the cruelty of Mormonism. He calls it “the perfection of cruelty, cruelty unmixed, and unequalled by any system of heathenism that ever cursed the world.”

But what is it that gives Mormonism this character of unequalled cruelty in the judgment of the Rev. La Roy Sunderland? Simply the fact that it pretends “to consign to hell all who do not believe it.” And is this any thing new or strange in the world?—And is every system to be denounced as cruel that does this? Is not Christianity, then, liable to the same serious charge?

Indeed, will Mr. Sunderland produce a single passage from the book of Mormon, or any of their pretended revelations, on the subject under consideration, which cannot be equalled by the popular interpretations of passages in the New Testament itself? We do not believe he can do it.

Indeed, nothing is plainer to our mind, than that the author of Mormonism has generally done little more than to employ either the phraseology of Scripture in its popular acceptation, or else such phraseology as is common among professed Christians on the subject of hell. Take for instance the very passages that Mr. Sunderland has quoted, and what are they, and whence did they come? The first is obviously formed in reference to Mark xvi. 16—“He that believeth and is baptized shall be saved, but he that believeth not shall be damned.” Now what more does the book of Mormon affirm than Mr. Sunderland himself interprets this passage of Scripture to mean? Where then is the unheard of cruelty of Mormonism? Look, again, at the second quotation, and tell us where Joseph Smith jr. gets the phrase, “he must go down to hell.” Is it not a common term in revivals and among the more zealous advocates of the doctrine of endless misery?

But Mr. Sunderland may reply that he does not complain of the use of these phrases, but only of Mormonism consigning to hell all who do not believe it, such as believe in infant baptism, &c. &c. Be it so. But what is there strange or intolerably cruel here? Is it any marvelous thing for Christians to consign to hell all who will not believe in Christianity? And has no one ever heard of their threatening with everlasting damnation those who do not believe certain doctrines, which they think orthodox; or for believing certain doctrines which they think heterodox? Do they not consign Unitarians to hell because they do not believe in the trinity? Do they not damn Universalists because they believe in universal salvation?

But if these things are done by the disciples of the meek and benevolent Jesus, who was the way and the truth, shall we complain that a vagabond impostor does the same? Shall we, can we expect any thing better from Joseph Smith, jr., than we receive from our doctors of divinity?

If he is, as he is represented, an unprincipled knave, we should expect him, when he turned manufacturer of religion, to follow the worst models with which he was acquainted. Such has been the course of wicked impostors in every age. Satan never puts on the garments of an angel of light, when he is about to make a new religion. He always leaves upon it the impress of his own character. For centuries it has been his constant labor to stamp his features on Christianity; and could the inspired record be destroyed and the world left to learn the nature of this religion from human creeds, we fear it would be found that his labor had not been in vain.

But we are wearying the patience of the reader. We do not fear that Universalists will be converted to Mormonism. It would be a movement retrograde to the order of nature; like going back from the kingdom of God’s dear Son to the kingdom of Satan—from light to darkness.

Mormonism is just such a religion, we mean its spirit is such, as we should have expected from such a man as its author is, and who was subject to such influences as surrounded him. It is a human system, marked by human passions, and designed to attain objects of a low and unworthy nature. Mormonism is not Christianity, nor is it any nearer Christianity than earth is to heaven. It has caught some of the shadows which a misrepresented Christianity has thrown upon it, as the face of the earth is sometimes shaded by clouds which obscure the heavens. But in itself, it is a very weak and very wicked attempt to impose upon the credulity of the ignorant, to inflame the passions of the fanatical, and to spoil of their substance its deluded victims. S.