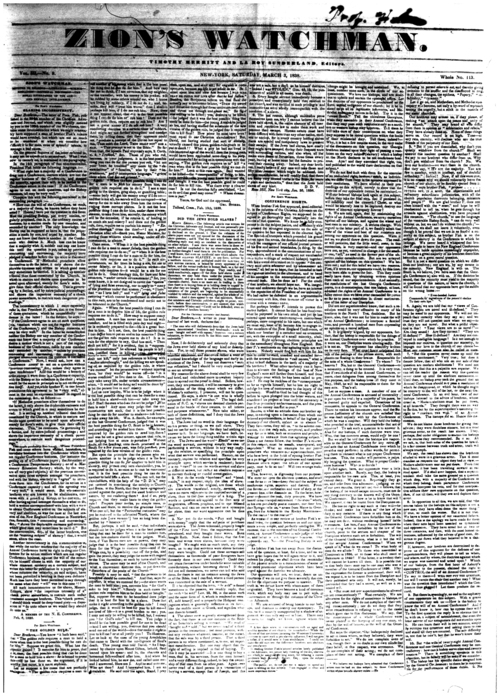 ORIGIN OF THE BOOK OF MORMON.

Since the preceding articles on Mormonism were written, a book has been handed us, which not only unveils the imposition of this whole scheme, but satisfactorily accounts for the origin of the book of Mormon. It is entitled, “Mormonism Unveiled,” by E. D. Howe; published at Painsville, Ohio, in 1834. From the testimony of many unimpeachable witnesses, given in this work, it is proved beyond the shadow of a doubt, that the “book of Mormon” was originally written by one Solomon Spaulding, who was born in Ashford, Conn., in 1761. He graduated at Dartmouth College, and became a minister of the Gospel, but afterwards left the ministry, and entered into business in Cherry Valley, N.Y., where he failed in 1809. He afterwards removed to Conneaut, Ohio, where, it was well known, at the time, that he was engaged in writing a novel, with the avails of which he expected to pay his debts. This work he called “The Manuscript Found,” and it purported to be a historical record of the first inhabitants of this country, whom it represented as descendants from the ancient Jews.

The vanity of Spaulding led him often to speak of his book, and to read portions of it to numbers of persons, who testify, as may be seen in the work above named, that, with the exceptions of the quotations from Scripture, the book of Mormon reads, very much like the novel of Spaulding which they heard read in 1810. To the existence of such a manuscript, we have the testimony of Mr. John Spaulding, of Crawford Co. Pa., a brother of the man who wrote it, and, also, that of his wife. This fact is also proved by the testimony of Mr Henry Lake, of Conneaut, Ohio, who was in business with S. Spaulding at the time he wrote that novel; Mr. John N. Miller, of Springfield, Pa., Aaron Wright, Oliver Smith, and Nahum Howard, of Conneaut, Ohio, and A. Cunningham, of Perry, Geauga Co., Ohio, testify to the same fact. Those witnesses inform us, that they well remember many of the names and incidents mentioned in Spaulding’s manuscript, and they pronounce them the same as those found in the book of Mormon.

The existence of the above named “Manuscript Found,” is further proved by the testimony of S. Spaulding’s widow, who says, it was carried to Pittsburgh, Pa., by her husband in 1812, where he died soon after. It was put into the hands of a printer by the name of Lamdin, (who died in 1826,) with whom Sidney Rigdon was very intimate, during his residence in that city. Rigdon obtained the manuscript from Lamdin, and after a few years, spent in rewriting and altering it, it was ushered forth to the world by Joseph Smith, jr., Rigdon and others, as a revelation from God! Such was the

At the close of the book of Mormon we find what is called “The testimony of eleven witnesses,” who affirm that they had “seen and hefted” the plates from which it is pretended the book was translated; and, also, what is called “The testimony of three witnesses,” who affirm that “an angel of God came down from heaven, and brought and laid before” their “eyes the plates and the engraving thereon.”

But we have before shown, that these witnesses are not to be credited, because they are interested, and no evidence whatever can be given besides their own word, to prove either their good character for truth, or the existence of any such plates as they speak of.

In the work entitled “Mormonism Unveiled,” before referred to, we find testimonies of not less than EIGHTY different persons, all residents of Wayne and Ontario counties, N.Y., which prove, beyond the possibility of doubt or contradiction, that neither Joseph Smith, jr., nor either of his witnesses are to be believed, and that Mormonism, from beginning to end, is a base delusion, which does not leave its originators even the credit of honesty or good intentions in its propagation. These witnesses are disinterested, respectable citizens of this state, many of whom have made solemn oath to the following facts, and their characters are sufficiently vouched for by magistrates of the counties where they live. Among many other things which might be named to the eternal dishonor of the authors of the Mormon delusion, we will notice the following:—

1. That Joseph Smith, jr., and his family were, about the time he pretended to have discovered the book of Mormon, known as “fortune tellers” and “money diggers,” and that they often had recourse to tricks of juggleing for the purpose of finding money which they said was hid in the earth.

2. That the said Smith, up to that time, and after, was known as a wicked man, that he was a cheat, and a liar, and used profane language; that he was intemperate and quarrelsome.

3. That his own father-in-law never had any confidence in him, and he was knowing to the manner in which Smith commenced his imposture in getting out what he called the book of Mormon.

4. That Smith has, himself, confessed the cheat, and so has Martin Harris, one of his principal witnesses. Harris once said, “What if it is a lie? if you will let me alone, I will make money out of it.”

5. That Oliver Cowdrey, another of the witnesses to Smith’s book, was not a man of good character before he joined Smith in the cheat of Mormonism.

6. That Smith and Martin Harris were in the habit of meeting together, often, just before the plates were said to be found, and, were familiarly known in the neighborhood by the name of the “Gold Bible Company;” and they were regarded by the community, generally, as a lying, indolent set of fellows, in whom no confidence could be placed; and Joseph Smith, jr.’s character for truth, was so notoriously bad, that he could not and was not believed when under oath.

7. The wife of Martin Harris testifies, that he is both a cruel man and a liar, he having beat her and turned her out of his house.

8. That Smith confessed his object in pretending to find the plates was to make money, saying, “when it is completed, my family will be placed on a level above the generality of mankind.”

Such are some of the facts, which are proved beyond the possibility of confutation, by the affidavits of respectable witnesses, persons who were well acquainted with Joseph Smith, jr., and his associates, both before and since the pretended discovery of his golden plates. And, perhaps, we cannot better close the investigation of this subject, than by quoting a specimen of those testimonies. It is numerously signed, as will be seen, and by persons well acquainted with the “author and proprietor” of the book of Mormon:— . . .