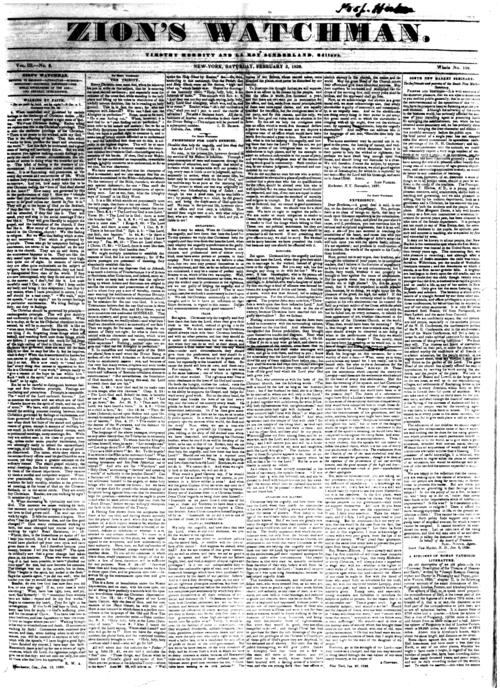 In examining the medley of contradictions and errors which abound in the book of Mormon, one is naturally led to ask, what could have been the object of the man who wrote it?

And what can now be the object of those who pretend to have seen the plates, in persisting in their attempts to deceive the public with regard to the divine origin of that book? It must certainly be something more than a mere love of the marvelous, something more than a desire to astonish the credulous with the stories of their pretended intercourse with angels.

On reading their “Doctrines and Covenants,” we shall not be at a loss for a satisfactory answer to these inquiries. A few extracts from this book, will fully sustain the following assertion:—

MORMONISM IS A SYSTEM OF MONEY MAKING.

Whatever other objects Joseph Smith, jr., and his associates now have in view, it is a fact, that all disinterested persons who have ever seen the style in which he lives, and the facilities with which the money of his deluded followers is given at his command, have been at once impressed with the conviction, that one, if not the principal object, which Smith and his associates have in view, is to amass wealth, which we know they have done to a vast amount in the place where they reside.

Look, now, at the following; it is an address to the Mormon preachers, and is found in one of the pretended revelations contained in the book above named:—

“Whoso feeds you, or clothes you, or gives you money, shall in no wise lose his reward; and he that doeth not these things is not my disciple; by this ye may know my disciples.”

Here it will be seen, that the gift of money to Mormon preachers is made the condition of membership in their society.

From the following extract it will be noticed—

1. That those who surrender their property to the Mormon community, as it is the grand object of all their preachers to persuade their disciples to do, can never recover it again; once given to the Mormons, it is gone forever. 2. All who submit to Mormon dictation, must yield up all their earthly property which they do no need for their support:—

It seems the above language is put into the mouth of God, and, by it, he is made to say that he has a “storehouse,” located in Missouri!

The following blasphemy is also put into the mouth of God. It seems that a man among them did not feel inclined to obey the above mandate of Joseph Smith, jr., and Co., and hence the following:—

“It is wisdom in me, that my servant Martin Harris should be an example unto the church, in laying his moneys before the bishop of the church. And also, this is a law unto every man that cometh unto this land, to receive an inheritance; and he shall do with his monies according as the law directs. And it is wisdom also, that there should be lands purchased in Independence, for the place of a storehouse; and also for the house of the printing.” — Sec. 16.

The following will show how poor backsliders from Mormonism are treated:—

“Let that which has been bestowed upon Ziba Peterson be taken from him; and let him stand as a member in the church, and labor with his own hands with the brethren, until he is sufficiently chastened for all his sins, for he confesseth them not, and thinketh to hide them.”

From the next extract, which is addressed to one Titus Billings, the grand object of Mormonism appears in full view:—

“And let all the moneys which can be spared, it mattereth not unto me whether it be little or much, be sent up unto the land of Zion, unto those whom I have appointed to receive.”

“And let all those (preachers) who have not families, who receive monies, send it up unto the Bishop of Zion, or unto the bishop in Ohio, that it may be consecrated for the bringing forth of the revelations, and the printing thereof, and establishing Zion.”

“Let my servant Newell K. Whitney retain his store, or in other words, the store, yet for a little season. Nevertheless, let him impart all the money which he can impart to be sent up unto land of Zion. “Behold, this is my will, obtaining moneys even as I have directed . ”

“He that sendeth up treasures unto the land of Zion, shall receive an inheritance in this world. And his work shall follow him. And also a reward in the world to come.”

And we must believe, that the foregoing language, is from the mouth of the infinite God, under the penalty of eternal damnation.

Look, also, at the following, said to be the words of the Most High:—

“I command that thou shalt not covet thine own property, but impart it freely to the printing of the Book of Mormon, which contains the truths of the word of God.”

“Impart a portion of thy property; yea, even part of thy lands, and all save the support of thy family. Pay the debt thou hast contracted with the printer.”— Sec. 44.

“The next extract is not only important, as it plainly shows the true Mormon solicitude about money, but it reveals an important fact with regard to Oliver Cowdery, one of the eleven witnesses upon whose ipse dixit we are commanded to believe the Book of Mormon:—

Hearken unto me, saith the Lord your God, for my servant Oliver Cowdery’s sake. It is not wisdom in me that he should be entrusted with the commandments and the moneys, which he shall carry up unto the land of Zion, except one go with him who is true and faithful. Wherefore, I, the Lord, willeth that my servant, John Whitmer, shall go with my servant, Oliver Cowdery.”— Sec. 28.

It seems they did not think it prudent to trust one of their inspired apostles with the money!

Does the reader still doubt as to the grand design of Smith and his associates? Read the following;—

Thus, we have presented the reader with the testimonies which the Mormons, while pretending to act under Divine inspiration, have borne of themselves testimonies, which prove beyond the shadow of a doubt, that their principal object is to get money, and enrich themselves with the property of those who become dupes to their deceptions.

We next proceed to show that

MORMONISM IS ANOTHER GOSPEL, DIRECTLY OPPOSED TO THE GOSPEL OF JESUS CHRIST.

1. In its precepts. Nothing can be found in the New Testament like the following, taken from the “Doctrine and Covenants” before named:—

“Whosoever shall lay their hands upon you by violence, ye shall command to be smitten in my name, and behold, I will smite them, according to your words, in mine own due time.”

And this impious blasphemy is put into the mouth of God! And will any believer in the Christian Scriptures say, that such daring wickedness as this should not be exposed and rebuked?

“Behold, I say unto you, that he that supposeth that little children needeth baptism, is in the gall of bitterness, and in the bonds of iniquity: for he hath neither faith, hope, nor charity; wherefore, should he be cut off while in the thought, he must go down to hell.— Ib. p. 582.

The curse of God is denounced upon all who reject the nonsense contained in the book of Mormon:—

3. Its spirit. The book of Mormon is filled with the details of murder and bloodshed. The holiest men of whom it speaks were murderers. For an instance, see on p.13, where it is said Nephi murdered Laban in cold blood, and this too, by God’s direction! Many similar narratives occur in the book of Mormon.— “Whoso,” says one of their prophets, p.46, “shall lay their hands on me, God shall smite him.”

One of the revelations in the book of “Doctrines and Covenants,” sec. 4, informs us, that their New Jerusalem is to be obtained, “by purchase or BY BLOOD.” And the book of Mormon is filled with the accounts of bloody battles which were fought by the people of God, for the propagation of the Gospel, and the maintenance of the true religion! Thus, on page 530, we have an account of a battle of this kind in which two hundred and thirty thousand men were slain!

It is not long since the papers gave an account of a battle between some of the present Mormons at the West, and their persecutors, in which the former defended themselves with martial weapons Nor can one doubt, for a moment, should Smith and his followers persuade any considerable portion of the natives of this country to embrace their creed, it would be an easy matter to induce them to engage in one general bloody effort for the recovery of their land, and the restoration of the religion which they might be taught to believe, is the religion of their forefathers.

4. It is opposed to the Gospel of Jesus Christ. All that is taught in the book of Mormon, as it is said, for six hundred years before Christ, and after, is called “the Gospel,” “the Gospel of Christ,” &c. But a little examination will convince any one, that it is another Gospel. For instance, the Gospel of Jesus Christ declares, that “All manner of sin and blasphemy shall be forgiven unto men,” except the blasphemy against the Holy Ghost, Matt. 12:31. But Mormonism in the book of “Doctrines and Covenants” declares:

“He that kills shall not have forgiveness in this world, nor in the world to come.”— Sec. 13.

Here; then, is a flat and palpable contradiction of the Gospel of Jesus Christ.

The New Testament commands us not to resist evil, Matt. 5:39. The book of Mormon commands directly the reverse:—

“Let us resist evil; and whatsoever evil we cannot resist with our words, yea, such as rebellions and dissensions, let us RESIST THEM WITH OUR SWORDS.”— p. 399.

“Though we, or an angel from heaven, preach any other Gospel unto you, than that we have preached unto you, let him be accursed.”— Gal. 1:8.

Some of the witnesses who testify to the truth of the book of Mormonism, inform us that “angels from heaven” appeared to them to convince them of its truth. Admitting this fact, both they and the angel are exposed to the curse of God.