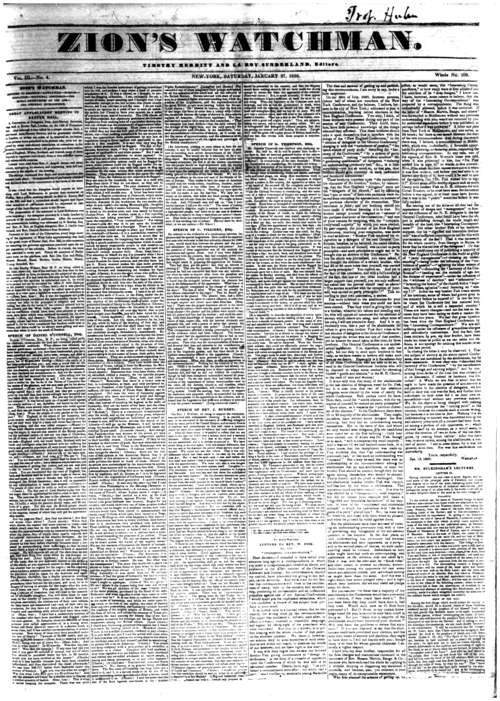 We have before shown, that one of the most distinguishing peculiarities of Mormonism, is, its pretensions to INSPIRATION. Its real believers profess to stand on an equal footing with the apostles, and to be as really inspired and empowered to work miracles as they were. We do not speak now, of the operations of the Holy Spirit by which all christians believe sinners are convinced of sin, and the heart is enlightened and sanctified to God; nor of that assistance which we all acknowledge the Holy Spirit renders to believers when it “helpeth our infirmities,” teaching us “how to pray and what to pray for.” But we speak here, of that INSPIRATION of God by which he makes known his will over and above what he has made known by the light of nature; and which imparts such a degree of DIVINE ASSISTANCE, as enables the person to whom it is given, to communicate to others, religious knowledge without error or mistake.

MIRACLES A miracle is something done contrary to nature or the established course of things; or a sensible suspension or controlment of, or departure from, the known laws of nature, performed immediately, either by the act or assistance of God, and accompanied with a previous notice that it is performed according to the purpose and power of God, for the proof or evidence of some particular doctrine, or in attestation of the divine mission of some particular person.

Hence it will be seen, that many mysterious events may appear, which are not miracles.

The effects of Galvanism in resuscitating an apparently drowned person, an earthquake, or the cure of disease by the power of the imagination, are not miracles. But a real miracle may be known by the following marks, which will apply to those performed by Moses and Jesus Christ: —

1. It should have an important end in view, one worthy of its divine author.

Upon examination it will be found, that not one of the miracles of Moses or Jesus Christ, was wrought on any trivial occasion. They were performed as attestations of the revelations which God made through them for the benefit of the world. And this fact, alone, puts them infinitely above all the miracles which it is pretended were performed by persons mentioned in the book of Mormon; as scores of the Mormon miracles are said to have been performed not only on the most trifling occasions, but many of them were insignificant and trifling in themselves.

Thus, what is said of God’s showing his finger, (p. 545) to Jared, “and it was the finger of a man, like unto flesh and blood,” and of the frequent appearance of angels, of earthquakes, and the various exploits performed by the persons in this book, all tend to show the vast, vast difference between the forged stories of pretended miracles, with which it is filled, and the accounts of the miracles recorded in the oracles of God.

2. A real miracle must be performed instantaneously, and publicly, before competent and credible witnesses.

Upon this evidence of miracles thus performed, the Bible claims the faith and obedience of a perishing world. But not so with the Book of Mormon. Smith professes to have been three years translating this book, and this was done in the dark, where no disinterested person could see, and examine the plates from which he pretended to translate. This fact alone stamps the whole production with fraud and infamy; and it is precisely such a course as we should expect an imposter to take, who, of course, would not be willing to submit his juggling to the candid inspection of impartial and competent judges.

3. Real miracles are not performed by the natural operation of second causes.

It is true, in two or three cases, Christ made use of external applications, for the cure of blindness, deafness, &c. But in those cases there was no natural adaptation of the means to the effect produced. The means were used simply to give the persons cured, a clear assurance that Jesus Christ was the author of the change produced upon them.

But a slight acquaintance with the nervous system, and the power of the imagination over it, will convince any one, how easy it may be to effect such cures as are referred to in some of our preceding remarks. Hence the means used to effect cures of diseases frequently, though they apply only to the imagination of the patient, are adapted to the end desired, and may often accomplish it without the performance of any miracle.

It is recorded of a Roman mother, that she instantly died of joy, on meeting her son as he returned from the battle of Cannae, where she supposed he had been slain by the veterans of Hannibal.

A lady in Kentucky, the wife of David Prentiss, Esq., some time since fell dead in an instant, while reading a letter which brought her the news of her husband’s death.

Burton, in his anatomy of melancholy, speaks of a child who was frightened to death, on seeing a malefactor hung in gibbets.

All the above events, and many others like them, which could be named, were produced by natural causes, there was nothing in them miraculous; and by the same power over the imagination, persons may be, and some, no doubt, have been, relieved or cured of imaginary or real diseases.

4. A real miracle must be adapted to the apprehension of mankind, it must be such as of which their senses can easily and fully judge.

When Moses divided the Red Sea, and when Christ raised Lazerus from the dead, and fed thousands with a few loaves and fishes, there could be no possible deception. But for the very purpose of deceiving, the author of the book of Mormon, professes to have translated it from a language, which no man living understands; and for a similar reason, the plates, on which it is said to have been engraved, have never been seen by any disinterested person. Hence, also, we are told of the angels, which the Mormons have seen, and the miracles they have wrought in the dark, but no person ever saw one of their angels, or one of their miracles but themselves. Could one deserve better evidence of fraud, than is given in these facts?

5. Public monuments must be set up, and some outward actions, also, must be perpetuated in memory of the miracles thus publicly wrought.

Hence the twelve stones set up from Jordan, by the command of God (Jos. 4:9.) to commemorate the passage of the Israelites, through that river, at the time when it overflowed all its banks; and, also, the celebrations of the passover, in memory of a miracle which God wrought in Eqypt. And hence, also, the commemoration of Christ’s resurrection by observing the first day in the week, as the Christian Sabbath, which has been done from the days of Christ, and also the institution of the ordinances of water baptism, and the eucharist, which have been standing memorials from the beginning of the divine mission of our blessed Redeemer.

But how perfectly insignificant and contemptible does the book of Mormon appear when examined in the light of these facts? That book pretends to give the history of a people said to have existed in their country before the Christian era; and of hundreds of miracles pretended to have been performed by their prophets, during the space of one thousand years. But of the existence of such a people, or of the astonishing miracles said to have been performed among them, not the slightest evidence can be given! No traditions among the Indians, no ordinances perpetuated, no monuments can be referred to as affording the shadow of proof, of what is affirmed in that miserably written book. The remains of Indian antiquities which have been found in some parts of this country afford no more evidence of the truth of Mormonism than they do of the divine mission of Mohammed.

6. The scripture account of miracles is authenticated, by the monuments which were set up, and by the public observances which were instituted, at the very time when those miracles were wrought, and they have continued without interruption from that time to the present.

Without these criteria, it is impossible to impose the belief of miracles, upon generations who live long after they are said to have been wrought. Hence the book of Mormon, bears upon its own pates prima facie evidence of its falsehood. It comes to us as a translation from certain plates, said to have been “hid up” in a hill, in Ontario County, N.Y., where no human eye had seen them for about one thousand four hundred years; and, indeed they are “hid up” to this hour, for till now, no disinterested person has ever been permitted to see them. Now, suppose the Bible, or any part of it, had first been offered to the world as a revelation from God, under such circumstances as these? Suppose the Jews, in the days of Christ, for the first time, had heard of the five books of Moses; that they had been found in a cave where, they informed the reader, they were to be hid for a thousand years. And, suppose, when they were first made know to the Jews, the revelation or “author” as J. Smith, jr., is called, could refer to no tradition, no monuments, no ordinances, nor any tangible evidence whatever to prove their authenticity?

Or, suppose, within the past year, the writings of the New Testament had been heard of for the first time during the space of fourteen hundred years; and that the person pretending to be the “author” and translator of those writings could not produce a word in the original language in which they are said to have been written —that he could refer to no history, in which those writings were acknowledged, —that he could appeal to no traditions of the people to whom they were originally given, nor to any monuments, perpetuated from the time of their first introduction into the world, nor show any evidence of his own claims to inspiration? Would that book, could it, be received by intelligent beings as a revelation from God, which we could not doubt, but upon the penalty of eternal damnation?

Now, contrast the above considerations with the evidence afforded to prove the authenticity of the book of Mormon: —

1. The miracles of which it speaks, are laid in a distant age, of which no evidence is now given.

2. The pretended inspired translation of the plates, was done in secret; and neither those nor any one pretended miracle of the Mormonites, were ever subjected to any scrutiny or examination by candid disinterested persons.

3. The existence of any such plates are not vouched for by any disinterested person.

Prophecy is a miracle of knowledge, a description of a future event, which cannot be discerned or calculated by any human sagacity.

On this subject it is worthy of notice: —

1. Most of the predictions in the book of Mormon, are taken from the Scriptures, and they might be much more accurately quoted, in any other book.

2. The other predictions in this book are written after the events which they describe come to pass. It cannot be proved that one prediction in that book, which is not taken from the Bible, was written before the event, said to be described.

3. There is no difinite predictions, peculiar to this book, yet to be fulfilled. No names of persons, or places, and no periods of time are referred to, by which any thing difinite can be determined, as to what is meant in the jargon of Mormon prophets. Hence its claims to inspiration fall to the ground; and one is at a loss to say which is the most astonishing, the wickedness of its “author,” or the credulity of such as receive it as a revelation from God.