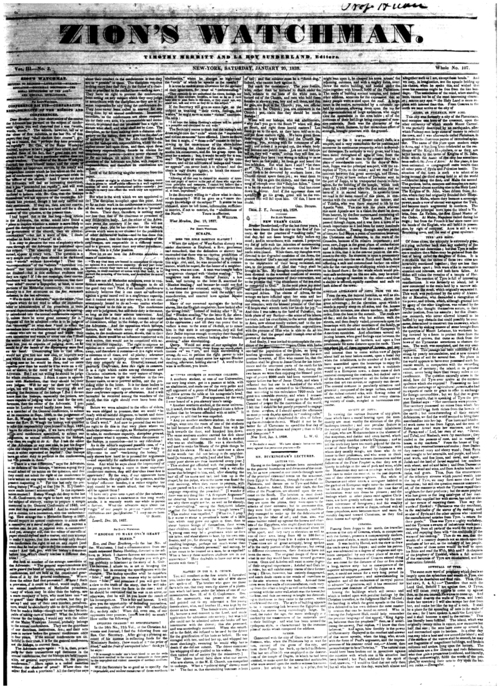 Every age has had its impostures; and what is remarkable, there are a number of traits in the different impositions which have been offered to the world as revelations from God, which perfectly agree with each other. So that in comparing one delusion with another, we shall find there is a most singular family likeness among them all, and by which we may easily determine the source from which they all had their origin.

We now proceed to show, that MORMONISM DOES NOT MATERIALLY DIFFER FROM OTHER SYSTEMS OF IMPOSTURE, WHICH HAVE OBTAINED CONVERTS IN VARIOS AGES OF THE WORLD.

1. Mohammedanism—Mohammed was born in Arabia, near the close of the sixth century. The book containing the revelations which he pretended to have from God, and from the angel Gabriel, is called the Koran. Like the book of Mormon, it contains some truths which are believed by all Christians and Jews. Indeed, it would not answer the design of an impostor to write a book, containing nothing but falsehood. This would be putting it in the power of all disinterested persons, at once, to detect the cheat.

One of the most prominent features in the pretentions of Mohammed, was his intercourse with angels, and he says that Jesus Christ informed him of many things, which he laid down as important dogmas in the Koran. Mohammedanism can boast of its millions of converts, and it puts forth equal claims to our faith as a revelation from God, with the book of Mormon.

2. The French Prophets.—These had their rise in Daupheny and Vivarais, about the year 1688. Five or six hundred persons of both sexes, give themselves out to be prophets, and inspired of the Holy Ghost; and this number was soon increased to thousands. The burden of their prophecies was, —“Amend your lives; repent ye; the end of all things draws nigh; ” precisely the language which is now used by the Mormons! In 1706, they went over into England, and in less than a year, there were, in and about London, not less than two hundred of them, and they had delivered four or five hundred prophetic warnings. And it is remarkable, that the substance of all their prophecies, was almost word for word, what we now hear from the followers of J. Smith, jr.

They said that they were the chosen heralds of salvation, both to the Jews and Gentiles, that God would confirm their mission by signs and wonders from heaven, and by a deluge of judgments upon the wicked throughout the world; and that the New Jerusalem, descending from above, would be manifested over the whole earth within the term of three years.

So we once heard a Mormonite predict the destruction of the place where he was declaiming, and finally, this entire nation, if his message was not received by them.

3. The Shakers.— Anna Lesse, or Lee, as she has been called, commenced her operations for the foundation of this sect, in 1774. She, also, had new revelations, and embodied them in a book called “Christ’s second coming,” a book which was as much inspired as any thing ever translated or written by Joseph Smith, jr. Her followers assert that she spoke seventy-two languages, and conversed with the dead.

4. Swedenborgeanism.— Emanuel Swedenborg was born at Stockholm, in 1688. After overloading his stomach, one day, with a very hearty dinner, he began to have those visions for which his after life was so remarkable. He thought he had daily intercourse with angels and departed spirits, who, he tells us, not unfrequently took seats with him at him at his table of earthly fare. He often went to heaven and to hell, or rather he saw a great many hells of different shapes, and he describes the persons whom he saw in those places. The same revelations are now pretended to by his followers, on as good authority as can be given to prove the inspiration of any Mormonite.

5. The Areekee.— This is the name of a sect among the heathen in New Zealand, described by Mr. White, a Wesleyan Missionary, we believe, who says:—“They pretend to have intercourse with departed spirits, by which they are able to kill, by incantation, any person on whom their anger may fall; and it is a fact,” adds Mr. White, “that numbers fall a prey to their confidence in the efficacy of the curses of these men, and pine under the influence of despair and die.” So it seems the heathen work miracles as well as the Mormons.

6. Anabaptists. —About three hundred years ago, a numerous sect arose in Saxony, denominated Anabaptists. They, missioned of God to foretell future events, and that they were on an equal footing with the prophets and apostles.

But it would far exceed our limits to give an account of all the different pretenders to inspiration, false Christs, and impostors which have, like the Mormons, threatened eternal damnation to all who rejected their testimonies, since the days of the apostles. The history of Jemimie Wilkinson, and of Joanna Southcote is well known. Nor need we attempt an account here, of that arch impostor, Mathias, who was tried in this state, not long since, for murder. Each of those, and scores of others who might be named, have had as many special revelations from God, as ever any Mormonite did, and could show as much evidence of plenary inspiration. To the above we will simply add a few facts concerning what may have passed with many, no doubt, for miracles, and as a sufficient offset to any pretensions of the Mormonites.

1. A man in Paris by the name of Mesmer, as long ago as 1784, pretended to have discovered a universal remedy for all diseases, which he called animal magnetism. And for the many extraordinary cures which he preformed, simply by the motions of his hands, the French king appointed a committee of learned men, (of whom Dr. Franklin, then the American minister at Paris, was one) to examine his pretensions. This subject, as all our readers probably know, has recently been revived in this country, and many astonishing accounts have been published of the wonderful cures which have been performed by the power of the imagination, alone, over the nervous system.

2. Some years since, a Mr. Perkins gained great celebrity, both in this country as well as Europe, for the cures he effected by the use of two small pieces of pointed metal, which he called “Tractors.” However, we believe the popularity of his “Tractors’ did not last long, after it was found out that wooden pins, produced the same salutary effects, when applied to the bodies of diseased persons.

3. In 1808, and for some time after, a Mr. Austin, of Colchester, Vt., gave out that he had “the gift of healing;” and that he could cure diseases without even seeing the patient; and many were the accounts, published at those times, of the cures of deafness, blindness, and consumption, cured by the “Prophet of Colchester,” as he was called.

4. History gives us an account of one Valentine Greatracks, who lived in the time of Cromwell, and who proclaimed himself impowered of God to cure the scrofula, and other diseases. Many professed to be healed by the touch of his hand, and he tells us that even the touch of his glove had removed many kinds of pain, and fits from women.

5. About the same time a Capuchin Friar, by the name of Bagnone, pretended to “the gift of healing,” by the touch of his hand alone. Multitudes attended him wherever he went, and many professed to experience the healing power, with which they believed him endowed.

And numberless facts like the above could be given, which would show the power of the imagination over the nervous system, and how susceptible the human mind is to that influence, which it is the grand aim of all impostors to assume over the credulity of such as come within the sphere of their operations. But the above will suffice to show the truth of the statement with which we commenced this article. Indeed, Mormonism can scarcely be called a new imposition, except it be in respect to the blasphemy of its pretensions, the absurdity of its details, and the wickedness of its authors. In these particulars, it may, and we believe its does, equal, if not exceed all pretended revelations which have gone before it.

In our next we shall examine its claims to inspiration.