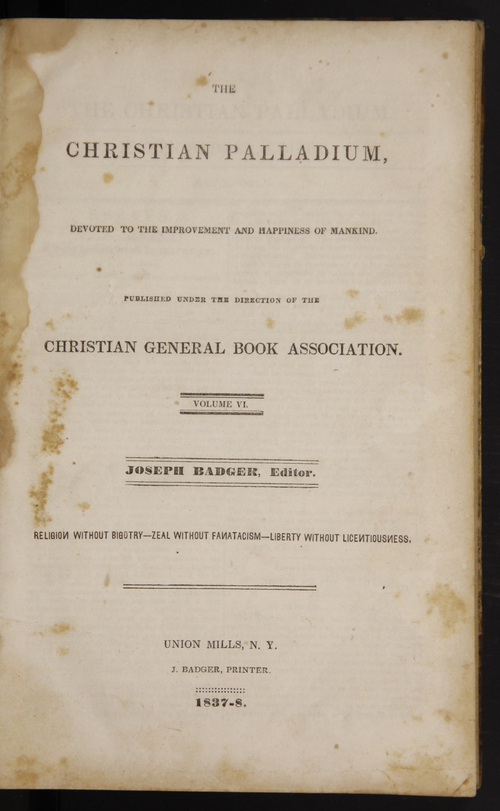 MR. EDITOR: If this discussion is to be protracted, the point at issue must not be lost sight of. The question is, is the Mormon book a revelation from God? Fearlessly I have said no; to prove which I have shown, 1st, That it lacked every evidence which has formerly attended a revelation from God. 2d, That it was not needed; and 3d, That it contradicted the Bible. Firstly, in its prophecies. Alma says, Christ should be born at JERUSALEM. Micah says, he should be born in BETHLEHEM. This, Mr. Post attempted to harmonize; but, like a wise man, I see he has given that point up as indefensible. This then, is admiting what I plead for. If this point is yielded, then Alma is a false prophet, consequently his revelation not from God. Secondly, I stated that the MORMON TRINITY was a contradiction of God’s book—this Mr. Post still labors to defend. So far as his writing has any bearing on this point, we will examine it, but in all his ramblings he must go alone.

In my reply to him I shewed that he quoted falsely. He commences his last by chargeing me with the same; but let him shew wherein. 1st, He says, Elder Barr seems to draw a line of distinction between God the Creator, the Eternal Father, and the Lord Jesus Christ; “leaving the reader to infer that they are two distinct personages.” Most assuredly I do, and so does the Bible. Was not Abraham and Isaac two personages? Are not every father and son two personages? So then God the Father is one personage, and Christ the Son is one personage, and as one and one makes two, so the Father and Son are two persons. Paul says, Christ is the “express image of his [God’s] person.” Now if they are not two, how could one be the “image” of the other? Was Christ the image of himself? What do you say, Mr. Post? Christ came forth from the Father, and came into the world—again he left the world, and went to the Father. Now Mr. Post, if there are not two, the plain english of it is this; he came from himself, and again he left the world and went to himself—are you prepared for this conclusion? But, says Mr. Post, this would assuredly make two God’s! Not so, sir; there is but one God the father, and there is one Lord Jesus Christ, the Son of the Father. The Father is the one God, and Jesus Christ the Mediator between him and us. Again, Mr. Post says, the Father and Son are one. One what, again I ask? Do you say one person, or being? Then Paul and Apollos are one being, and all the disciples will be one person. For Jesus prays that they may all be one, as he and his Father are one. Will you mention that, dear sir? You cannot avoid it if the Father and Son are one person. But, says Mr. P., “the Son is a personage of tabernacle in the likeness of man.” Again, he says, “the Son is an eternal personage.” Mr. Post, is this “tabernacle” created, or uncreated? Is it matter or spirit? If it is spirit, it was not born; neither did it die, according to Mr. P., for he says, the “spirit was not born,” “neither did it die.” If it is matter, then part of his God is material!

Now see, first he says, the Son is the tabernacle, the tabernacle is material; then he says, “the Father and son were united in the same person.” Here then, you have the Mormon God. O look at it! and then weep for the weakness and wickedness of men!! A complex, compound God!! part matter, part spirit, and yet eternal!—eternal matter!!! This is too much. Father forgive him, he knows not what he does. Once more,—

He evidently means that the tabernacle was nailed to the cross, died &c., while the spirit departed from it, and thus escaped the hand of death. This idea is somewhat like the panther killing the hunter. The hunter treed a panther which he wished to kill, but knowing that if he shot the panther, and only wounded him, that he would leap from the tree and tear him to pieces; in order to save himself, he stuck his wiping rod in the ground, and put his blanket round it, and his cap on top; then crawled away behind a tree, (the panther still eyeing the blanket which the hunter had been in,) he fired and wounded the panther, which leaped from the tree and tore the cap and blanket all to pieces, while the hunter was safe behind the tree.