Gazetteer of the State of Missouri

Gazetteer of the State of Missouri Wetmore, Alphonsos 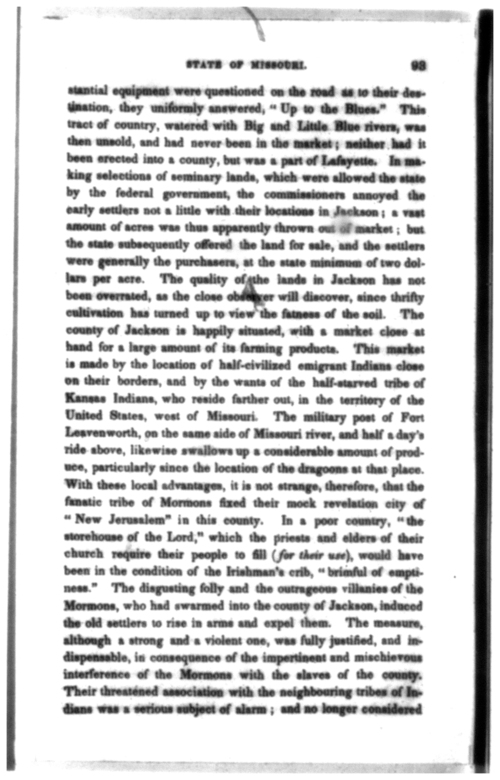 . . . The quality of the lands in Jackson has not been overrated, as the close observer will discover, since thrifty cultivation has turned up to view the fatness of the soil. The county of Jackson is happily situated, with a market close at hand for a large amount of its farming products. This market is made by the location of half-civilized emigrant Indians close on their borders, and by the wants of the half-starved tribe of Kansas Indians, who reside farther out, in the territory of the United States, west of Missouri. The military post of Fort Leavenworth, on the same side of Missouri river, and half a day’s ride above, likewise swallows up a considerable amount of produce, particularly since the location of the dragoons at that place. With these local advantages, it is not strange, therefore, that the fanatic tribe of Mormons fixed their mock revelation city of “New Jerusalem” in this county. In a poor country, “the storehouse of the Lord,” which the priests and elders of their church require their people to fill ( for their use), would have been in the condition of the Irishman’s crib, “brimful of emptiness.” The disgusting folly and the outrageous villanies of the Mormons, who had swarmed into the county of Jackson, induced the old settlers to rise in arms and expel them. The measure, although a strong and a violent one, was fully justified, and indispensable, in consequence of the impertinent and mischievous interference of the Mormons with the slaves of the county. Their threatened association with the neighboring tribes of Indians was a serious subject of alarm; and no longer considered [93] doubtful in point of fact, when the Mormon population were found with arms pointed against their neighbours. The operation of fanatic zeal upon the human mind will account for the seeming improbability and the audacity of the outrages contemplated, and those actually perpetrated by this people. This tribe of locusts, that still threatens to scorch and wither the herbage of a fair and goodly portion of Missouri by the swarm of emigrants from their pestilent hive in Ohio and in New-York, must here be allowed the enviable distinction of having their follies and mad achievements recorded. It may serve the same valuable purpose, when viewed by the reader, that was designed by the Spartans, who made their slaves drunk, to show the children of Lacedæmonia the folly of inebriety. Without descending to the minutiæ of the origin of the Mormon creed, which would be as fatiguing as the detailed events of a wolf-hunt (including a biography of all the dogs), some of the most important particulars will suffice.

Somewhere in the western part of New-York, a few years ago, there existed a vagabond, whose name was Joe Smith. He was akin to some of the other Smiths, probably the black-Smiths. The only peculiarities of his early life are comprised in these important facts: he was too lazy to work; he was not sensible of the propriety of having the holes in his clothes patched; and he could perceive no necessity of washing his face; “for,” said Joe, “it won’t stay washed.” There was another peculiarity in the character of Joe. He had, by some unaccountable effort, learned to trace characters with a pen, so as to be able to write his name; but he insisted that the usual orthography of the name was wrong. He therefore corrected the errors of the early lexicographers, and subscribed it thus—“Go-Smith.” This innovation marked his character, and he subsequently became a reformer in religion as well as in grammar, and with like advantages in both instances. In orthography he is a “real horse,” full match for one of the lieutenant-governors of the great valley, who wrote Congress in the following unique style—“ Kongris.” As it has been observed that Joe was too lazy to obtain his bread by honest labour, it naturally followed that he must rely upon his wits, however obtuse these might [94] appear. His want of learning and sense probably helped out the delusion he has practised so extensively, and aided him in making the impression that he was inspired. He has convinced his followers that he can converse in “unknown tongues.” As he made horrible butchery of the English, it was fair to suppose he could speak some language; and the opinion that beasts and birds converse, has gained currency to some extent. In the prosecution of his scheme of reform, to enable him to “remove the deposites” from the pockets of his dupes to his own, in conjunction with two or three confederates, he professed to have found in the earth a book with golden leaves. This book, leaf by leaf, Joe Smith, by aid of inspiration, read to a friend, “who held the pen of a ready writer,” and it was written out in dull, drawling, oriental style. The reader could only translate and read these golden tablets with the aid of a pair of marble spectacles, strapped to his head with thongs of leather; and this part of the solemn farce was performed in a closet, from which much of the light of heaven was excluded. Mystery is always imposing; and that which is incomprehensible commands the homage of all those who delight in the marvellous. The novelty of miracles sometimes induces us to help the impostor in his efforts to cheat us into a belief in impossibilities. The same corrupt taste assembles crowds around a calf with two heads, and leads to the foot of the gallows, on great “hanging festivals,” thousands who might be more profitably employed at home. As Joe Smith had not quite mind enough to be amused with any thing he saw or heard in this world, it was easy for him to look grave; gravity, being an illegitimate half-brother of wisdom, enabled this prophet of Mormon to pass for a sage or a seer, when he was only an impostor and a nincumpoop. Joe had heard, or he had dreamed, that the world was governed by women, sometimes directly, but, where the Salique-law was in force, by indirect means. He therefore began the explanation of his solemn mysteries to the fair daughters of eve, who look with peculiar pleasure on golden pages. It should be here remarked, that this book, which is a translation, if we may believe Joe, is the most ridiculous farrago of nonsense that, in the press, ever disheartened a printer’s devil [95] in the senseless expenditure of ink. There is not a sentence in it that has point or meaning, or can be made to reach the understanding of any human being, except the reader may have the advantage of being a knave or a fool. The expounders of this Mormon bible have, by much preaching, persuaded a large amount of folly and ignorance to believe, that some city of Zion was to be erected somewhere, and the leaders have determined that in Jackson county a spot is indicated to them by supernatural agency. To this county, then, this mass of human corruption was moving to an alarming extent, when, in self-defence, the good citizens of Jackson put in execution the good old law, and scattered them abroad into the neighbouring counties. But as good and wise communities rise out of the ashes of martyrdom, so the Mormons have added to their numbers and increased their consequence by the persecutions that they claim to have suffered; and they are supposed to be returning to the charge with the added strength of many recruits, guns, trumpets, &c. Looking calmly on the practices of folly and villany, and the success that uniformly attends the most extravagant pretensions, we should not feel any surprise to find a leader numerously followed, the prominent tenets of whose sect commanded the members to eat raw flesh, and walk on “all fours.” As an instance of human delusion, reference may be made to the success of the impostor Matthias, whose long beard and white wand led astray rich, well-educated people. We might exclaim with my maiden aunt Abigail, “The Lord deliver us from whiskers of every cut and fashion!” . . .