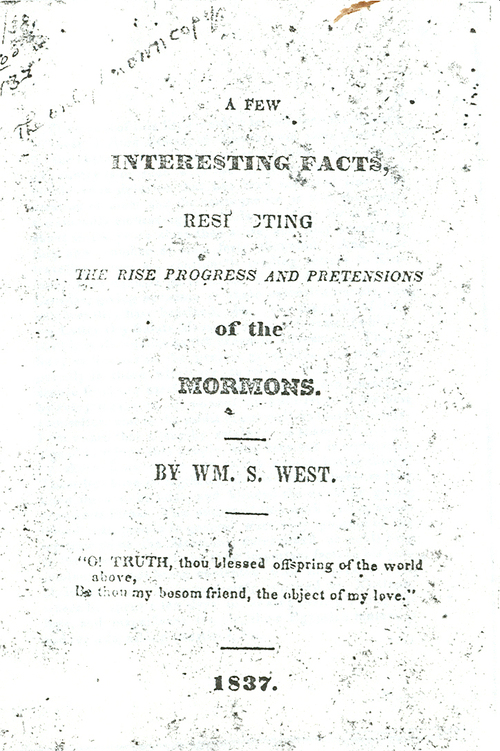 West, William S. A Few Interesting Facts, Respecting the Rise Progress and Pretensions of the Mormons, 15–16. 1837.

. . . They also pretend that the authenticity of their new bible is proven by numerous passages of Scripture, one of which is the 11th verse of the 85th Psalm, where the Psalmist says, “truth shall spring up out of the earth.” But the Psalmist could not have had reference to the Book of Mormon, for there is an abundance of proof that the Book of Mormon is false. In support of this assertion I will state, in the first place, that there is sufficient testimony that the historical part of the Book of Mormon was written at Conneaut, Ashtabula county, Ohio, about the year 1814, by one Solomon Spalding, who called it the Manuscript found, and intended it for a romance; that he went to Pittsburgh for the purpose of getting it printed, left it at the office of Patterson & Lamdin, and soon after died; that Rigdon became an intimate in this office about the year 1825, that the printing copartnership was soon after dissolved, and that Lamdin died: see Mormonism Unvailed, pages 278, and 290 inclusive. Now if this manuscript did not fall into the hands of Sidney Rigdon where is it? Any person who knows where it is, or has ever seen it, or heard of it, is called upon to communicate the information to Wm. S. West, of Braceville,

Trumbull county, Ohio. Also any other information respecting this deception, that can come well authenticated, will be thankfully received; for I am confident that a knowledge of truth respecting Mormonism, will place it on a par with Mahometanism. All business communications must be post paid.

In the second place, I will notice that the three witnesses to the Book of Mormon saw the plates only in their imagination: see Booths’ third letter. This proves that they saw no plates at all, and there never were any to be seen. Who will have to answer for the many lies told about those plates under the solemn circumstances of God called to witness? O the height of presumption.

In the third place, we are told by the Book of Mormon [15] that the people of Jared were brought to America by a combination of miracles, at the time of the dispersion from Babel. This was 101 years after the flood, and 2247 years before Christ. This people became very numerous, and flourished until 600 years before Christ, when, by their wars they became extinct, and were succeeded by Nephi and his party, from which the American Indians have descended. This alone is sufficient to justify my assertion for there are found throughout the whole continent numerous traits of many ancient nations, differing materially from the present race of Indians, and also from each other: see American Antiquities. The celebrated traveler, Mr. Ash, states that hundreds of mummies, in all probability of Egyptian origin, were found in Kentucky in the year 1775: see American Antiquities, page 110. These mummies must have been embalmed before the Christian era. It is the opinion of many celebrated antiquarians that for many centuries after the flood the Island Atlantis afforded an easy passage from Europe to America: see American Antiquities.

“There is a strong resemblance between the northern and independent Tartars and the tribes of North American Indians, but not of the South American. Besides that reason, there are others for believing our aborigines of North America, were descended from the ancient Scythians, and came to this country from the eastern part of Asia,” Josiah Priest: see American Antiquities, third edition revised, page 55. Therefore it is a reasonable conclusion that America was settled soon after the flood, and has ever after been subject to the rise and fall of nations. . . .