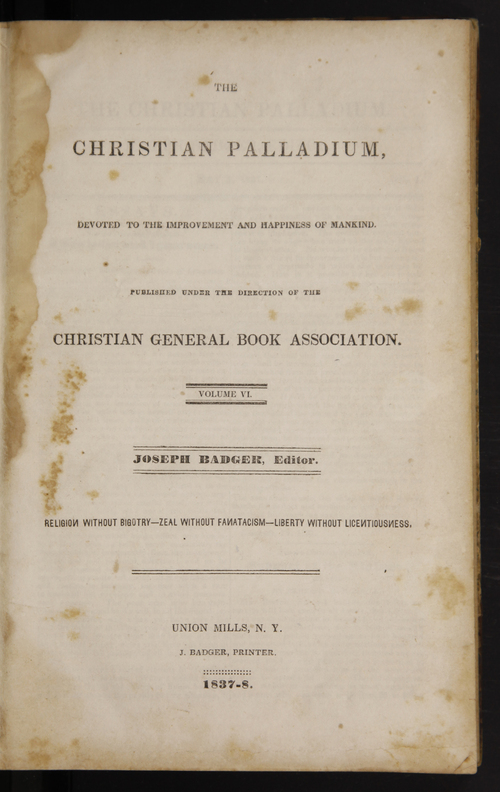 Through the politeness of the Editor, I have received two numbers of the Palladium, containing an article written by S. Post, with its answer, written by Elder O. Barr; to whom I must say in the words of Paul, “Therefore, thou art inexcusable O man, whosoever thou art that judgest; for wherein thou judgest another, thou art condemned thyself; for thou that judgest, doeth the same things”—which the reader may see by examining the two articles. I have no slurs to cast upon any set of people, wishing all to come to a knowledge of the truth, as it is in Christ Jesus; and as “those things which are revealed belong to us,” it behooveth every individual to search them diligently, that they may obtain a correct idea of God, his attributes, and plan of salvation; that they may exercise faith in him unto salvation, which is desirable above all things. Elder B. says, “and did God the Creator, the Eternal Father have a mother? Was he spit upon? Was he nailed to the cross? was he buried in a sepulchre?” Elder Barr seems to draw a line of distinction between God the Creator, the Eternal Father, and the Lord Jesus Christ; leaving the reader to infer that they were two distinct personages, with similar bodies and minds; which would assuredly make two Gods; whereas the Scriptures plainly declare that there is but one, and he a God that will not give his glory to another. I am aware that there has been much labor spent in controversy on the above subject; the most of which, however, has served to “darken counsel, by words without knowledge.”

But to be brief:—What constitutes the supreme and governing power over all things, by which they were created and made? I answer, the Father and Son, who are one, constitute this power; the Father being a personage of spirit, glory and power, possessing all fulness and perfection; the Son, who was in the bosom of the Father, a personage of tabernacle in the likeness of man, (for man was made after his image) possessing all the fulness of the Father, being in the express image of his person, and being begotten of him before the foundation of the world. Were the Father and Son united in the same person?

They were: Col. i.19—ii. 9. For it pleased the Father that in him should all fulness dwell. For in him dwells all the fulness of the Godhead bodily. Rom i. 20: For the invisible things of him from the creation of the world are clearly seen, being understood by the things that are made, even his eternal power and Godhead. Then we find that the Godhead was concentrated in the Lord Jesus Christ, whose tabernacle contained the fulness of the spirit of the everlasting God, the Almighty. If there was a time when there was no Son, then Jesus Christ is not eternal. But what says he of himself?—“Before Abraham was, I am.” Rev. i. 8: “I am Alpha and Omega, the beginning and ending, saith the Lord, which is, and which was, and which is to come, the Almighty.” 17, 18: “And he” [Christ] “laid his right hand upon me, saying unto me, Fear not; I am the first and the last: I am he that liveth and was dead; and behold, I am alive forever more, amen; and have the keys of hell and of death.” John xiv. 9, 10: “He that hath seen me hath seen the Father;—The Father that dwelleth in me, he doeth the works.” Paul says, Heb. xi. 3:

“Through faith we understand that the worlds were framed by the word of God.” And John says, Heb. i. 1, 2, 3: “In the beginning was the Word, and the Word was with God, and the Word was God. The same was in the beginning with God. All things were made by him, and without him was not anything made that was made.” 14: “And the Word was made flesh, and dwelt among us.” Col. i. 16, 17: “For by him” [Christ] “were all things created, that are in heaven and that are in earth, visible and invisible, whether they be thrones or dominions, or principalities or powers; all things were created by him and for him; and he is before all things, and by him all things consist.”

Thus we find that Jesus Christ is an eternal personage, who was before all things; and without him there was no creation, for “He is the rock, his work is perfect; for all his ways are judgment; a God of truth, and without iniquity; just and right is he” who shed his blood for us to redeem us from the curse of a broken law; for “God was manifest in the flesh,” and Jesus, “through the eternal spirit offered himself without spot to God”— “being put to death in the flesh, but quickened by the spirit,” being raised in glory; a spiritual body; breaking the bands of death triumphantly, to pave the way to follow thro’ faith and obedience; he becoming “the author of eternal salvation to all them that obey him.” Paul, in giving his charge to the Elders of the church of Ephesus, says, Acts xx. 28; “Take heed therefore unto yourselves, and to all the flock, over the which the Holy Ghost hath made you overseers, to feed the church [230] of God, which he hath purchased with his own blood.” Then if God was manifest in the flesh, and purchased the church withis own blood, there certainly must have been a way for him to come among us, to make the offering, which way we find in Matt. i. 23—“Behold, a virgin shall be with child, and shall bring forth a son, and they shall call his name Emmanuel; which being interpreted, is God with us.” Thus, we see there was a way prepared for God to have a mother after the manner of the flesh; and Jesus of Nazareth is that same personage; of whom Isaiah says, “unto us a child is born, a son is given, whose name shall be called ‘the mighty God, the everlasting Father, the Prince of peace.’” But, must we suppose that it was the spirit that was born? No; neither did the spirit die at the crucifixion. Jesus said to the penitent thief, “today shalt thou be with me in paradise.”—Was his body in paradise? No; then it was his spirit; which, ever living, was able to sustain the universe while his body was upon the cross; Christ’s being slain did not diminish his power. “By him all things consist,” and if all things are his workmanship, then it follows of course, that God the Creator, the Eternal Father had a mother after the manner of the flesh, was spit upon, nailed to the cross, slain, and buried in a sepulchre; and rose again the third day. For he said, “I lay down my life that I might take it again. I have power to lay it down, and I have power to take it again”—which power was of the spirit which dwelt in him, “For in him dwelleth all the fulness of the Godhead bodily.” And being risen by the power of God, he which was, and is, and is to come, will reign “till he hath put all enemies under his feet;” the last of which is death. When the Kingdom will be delivered up to God the Father—death being swallowed up in victory, through the second Adam, who “is the Lord from heaven”—all things becoming spiritual, that God may be all in all. 1 Cor. xv.

28: “And when all things shall be subdued unto him, then shall the son also himself be subject unto him that put all things under him, that God may be all in all.” Job xi. 7, 8: “Canst thou by searching find out God? Canst thou find out the Almighty unto perfection? It is as high as heaven; what canst thou do? Deep as hell; what canst thou know?”—1 Cor. xii. 3: “No man can say that Jesus is the Lord, but by the Holy Ghost.

Matt. xi. 27: “And no man knoweth the son, but the Father; neither knoweth any man the Father, save the son, and he to whomsoever the son will reveal him.” 1 John v. 20: “And we know that the son of God is come, and hath given us an understanding, that we may know him that is true; and we are in him that is true, even in his son Jesus Christ. This is the true God, and eternal life.—Therefore, O! ye inhabitants of the earth! repent and be baptized every one of you in the name of Jesus Christ, for the remission of sins; and ye shall receive the gift of Holy Ghost.”

I had intended to answer some other of Elder B’s questions in his article, but the length of mine will not permit. My remarks on the priesthood are necessarily delayed also.