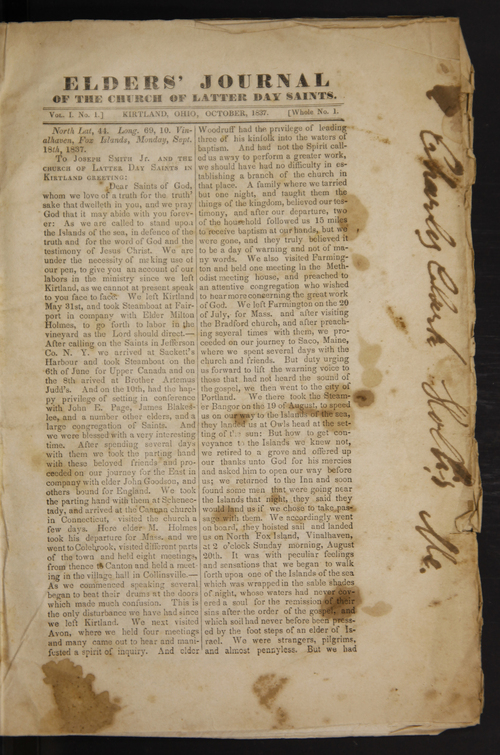 DEAR BROTHER, I take this opportunity to write, that your readers may know how the kingdom of God is rolling forth in these parts. Since my arrival in this city August 5th I have preached in three of their chapels, on board three of their vessels, in several of their private houses, and once in the ship yard, to a crouded and respectable audiance who listened with profound attention, while we baptized four persons in east river, towards the upper end of the city. It has been with much exertion that the truth has taken root in this city, but at length, the Spirit of the Lord is beginning to manifest it self in mighty power and showing that he is able to do his own work. On last Sunday eve while preaching at the house of a good old Cornelious who had not yet obeyed the gospel, but was seeking and believing, while I yet spake he was carried away in a vision and saw the two sticks, representing the two books and the light and glory of God shining around them: to this he arose and testified, in the power of the Spirit and immediately spake in tongues & interpreted the same, speaking of the two records and of the remnant of Joseph and how they would soon come to the knowledge of the truth and nearly all present believed and glorified God, and several are intending to obey the ordinance. The gift of healing is also beginning to be enjoyed here in some degree, and we are now preaching daily. On last eve we had two of the Campbellite preachers to hear us; they expressed much satisfaction and a desire to hear more there is a society of them in this city. Mr. Joseph Wolsf, a Jews, who has journeyed through all parts of the old world, from Palistine to Irgia, for many years In search of the ten tribes, has at length come to America to learn the origin of the Indians. He came to this city about the time I did and commenced lecturing to immense crouds of people; you may see his lectures in the public prints, and they are precisely what we believe and teach, as for as prophecy & its fulfillment is concerned, that is as far as he goes: I have had two interviews with him and have told him concerning the finding the record and the rise of the church keeping nothing back.

He seemed excedingly interested, not only in the record but in the prophecies of the old testament concerning Joseph and Ephraim, which I opened to him, I finally made him a present of the book of Mormon which he promised to read attentively, and he also took the Name and resi,dence of brother Smith, and probably will call on him in Kirtland soon, and if he does I hope he will preach a few discourses in the house of the Lord, for be assured, he will greatly confirm [8] the truth of prophecy and its fulfillment; Being acquainted with the things of the East, he informs me that there are people in the confines of Russia who are called Gog and Magog to this day, and that the chief prince of Mesheck and Tubal*1 (Tobolsk) is no less, than the Emperor of Russia; In short his coming and his manner of preaching is but another evidence that the preparotory work has commenced upon all the face of the earth for the gathering of his people.

The following is one of his visions which he has suffered to be published in the papers in this city, which is truly a striking picture of the state of things as they will by and by exist in Jerusalem. He says being greatly cast down in my mind concerning the Jews, I was all at once carryed away in the Spirit and set down in the midst of Jerusalem (which is to be rebuilt) & I saw Jesus and Abraham, Isaac, and Jacob, & others walking the streets in their glorified bodies, and as they passed by the daughters of Jerusalem devoutly looked out of the window as Jesus approached and exclaimed, the Tabernacle of God is now with men. Some of the saints were looking about and said who are these ships coming from a distance as doves to their windows 1 *See Ezekiel 38 chap. and others answered these are ships of England, and the vision closed. Besides our labours in this city I have been to Providence and Boston, and from thence to Holliston, Mass. where I gave a course of lectures in the Town house, the building was decently full at first, but the congregation continued to increase insomuch that some put ladders to the windows and listened from without by climing to the second story. I baptised two persons in Holliston, and I think many more will come forward soon, indeed the work must be firmly rooted in the minds of many in that place, judging from the attention of the people who listened with intense interest through a regular course of Instruction. Besides other labors, I have in two months past written 216 pages, which with the assistance of Eld. Elijah Fordham who has been laboring faithfully with me, is now issuing from the press and the first will be bound and ready for sale tomorrow or next day, three Thousand copies are printed, it is entitled A VOICE OF WARNING and INSTRUCTION to all people containing a declaration of the faith and doctrine of the church of Latter day Saints commonly called Mormons. It contains in short the principles which we wish to teach the world as to prophecy and doctrine, opening the prophecies in a clear, conclusive, and intelligent manner, and so simple that all may understand. It contains eight chapters exclusive of preface, and appendix.

The first is on prophecy already fulfilled, the second on prophecy yet future, the third is on the kingdom of God. the fourth on the book of Mormon, and origin of the Indians, the fifth, a proclamation, the sixth on restoration of all things, the seventh on the dealings of God with all nations in regard to revelation, the eighth is entitled a contrast between the doctrine of Christ and the false doctrines of the nineteenth century:—But I will immediately forward you a copy from which you will feel at liberty to extract such portions as you see fit, for your valuable paper.