The Mormon Defence refuted “Mormonism, no. 4” 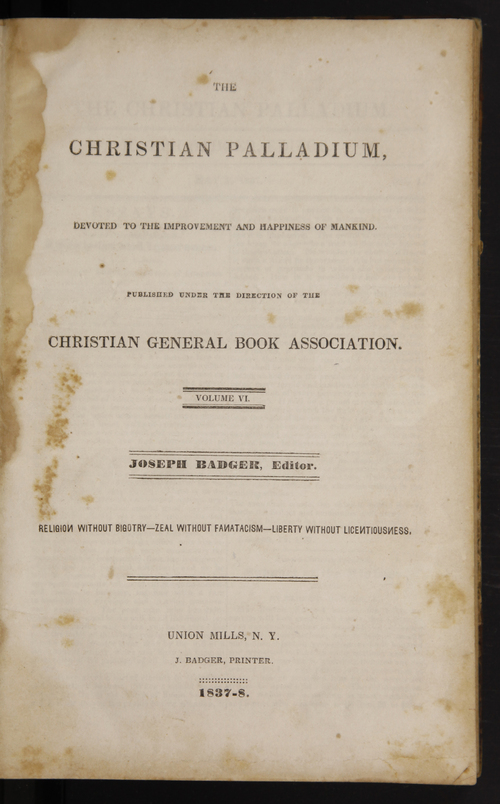 “He fighteth as one who beateth the air.”

BR. BADGER:— In looking over the last number of the Palladium, I noticed an article from Mr. S. Post, purporting to be a reply to mine, on Mormonism of Nov. 9, 1836, and published in Vol. v. No. 18, Christian Palladium.

And did God the Creator, the Eternal Father have a mother? Was he spit upon—was he nailed to the cross—was he slain and buried in a sepluchre? Let the gentleman give us the book, chapter and verse where we can find it in the Bible. Was the mother of God created, or uncreated? If created, then God created his own mother, because he created all things. If uncreated then there are two uncreated beings. Which is the oldest, the mother or her offspring? God is a Spirit. Was a spirit nailed to a cross? If so, how was it done? If not, then God was not nailed to a cross. Was God spit upon? If so, who saw it? No man hath seen God at any time. Was God slain? If so, who sustained the Universe while he was dead? Was God laid in a sepulchre? The Heaven of heavens cannot contain him, how then could a sepulchre? Was God a child? Who was his father, and how long has he been out of his childhood? Can a man in his senses affirm on these questions? He must, if he believes the Mormon Book.

2. Mr. P. says, “Jesus was not born in but at Jerusalem.” And as Jesus was born in Judea, [138] and Jerusalem is the capital, he thinks it will do for Alma to say he was born at Jerusalem, though he was born in another town. Supposing, Mr. Editor, I should say you live at Albany. No, says Mr. Post, he lives in Broadalbin. No difference, Albany is the capital of the state, and Broadalbin is near by; so it is true what I said. Will this go Mr. Editor?

4. As this one God is called the Savior, and the only Savior, Mr. Post thinks that Jesus Christ must be God, the only God, because he is called Savior. Now, I admit that God is the being from whom salvation flows, and that in a supreme sense there is no Savior besides Him. But how does he save? See Nehemiah ix. 27, “And according to thy manifold mercies thou gavest them saviors, who saved them out of the hands of their enemies.” Here it will be seen is a plurality of saviors. And were these God? No. See 2

Kings xiii. 5. “And God gave Israel a savior, so they went out from under the hand of the Syrians.”—These saviors whom God gave unto Israel were Deborah, Jeptha, Gideon, Iehonhas and others. These were not Gods, though they were Saviors. God is the only Savior, because salvation, and power to save, can only come from him. These persons were saviors, because God sent them, and gave them power to be so. Obadiah xxi. says and “Saviors shall come from mount Zion, to judge the mount of Esau.” Here again it is seen that the term Savior is applied to others than God. See Luke ii. 11, “Unto you is born this day in the city of David a Savior which is Christ the Lord.” Here it will be seen that the term Savior is applied to one who was born. The eternal God was never born; Christ the Lord was born, hence Christ the Lord is not the eternal God, but one whom “God has exalted with his right hand to be a prince and a Savior.” Acts v. 31. Surely God did not exalt himself with his right hand. But “of this man’s seed hath God raised unto Israel a Savior.” Acts xiii. 33. “And we have seen and do testify that the Father sent the Son to be the Savior of the world.” 1 John v. 14. Though Jesus Christ is called Savior, we see instead of being God, he is one whom God raised, exalted and sent to be a Savior. He who was born, raised, exalted and sent, cannot be the supreme God.

6. “The Father and Son are one,” says Mr. P. One what? Are they one person? If so, how is the Son the express image of his Father’s person? Heb. i. 3. Are they one being? Then will all the disciples eventually be one being. For Christ prays “that they may be one even as we are one.” Christ says “I and my Father are one.” Paul says, he and Apollos are one. How? not one being, but one in mind, in spirit, and in work.

7. “Christ is Father and Son,” says Mr. P.—If so, how could the Father send the Son? Did he send himself? How could the Son sit on the right hand of the Father? Was he on his own right hand? What do you say, Mr. Post? When the Father said from heaven, “this is my beloved Son,” why did he not say, this is my beloved self? The Son cried on the cross to his Father, “My God, my God, why hast thou forsaken me?”—Why did he not say, why have I forsaken myself? When he says, “I ascend unto my Father,” did he mean, I ascend unto myself? If not, then Christ is not Father and Son.

9. Mr. Post says, “there are many in this age who have the faculty of manufacturing gods.” This is true. In the 4th century the Catholics manufactured a triune God, for such a God was never known before. In the 19th century the Mormons have manufactured another. One consisting of a Father, Son and a created tabernacle in which the Father and Son dwelt. Neither of these are the God of the Bible. The Bible says, there is one God the Father, and one Lord Jesus Christ the Son of the Father.

10. As Mr. Post says, those who have manufactured gods, have manufactured faiths to agree with the gods they have manufactured. This too is true, and this accounts for the Mormon god—the trinitarian God, and all their jarring faiths the foolish rites and ceremonies of Catholics and Mormons, with all the unreasonable creeds and disciplines which are not in accordance with the word of God.