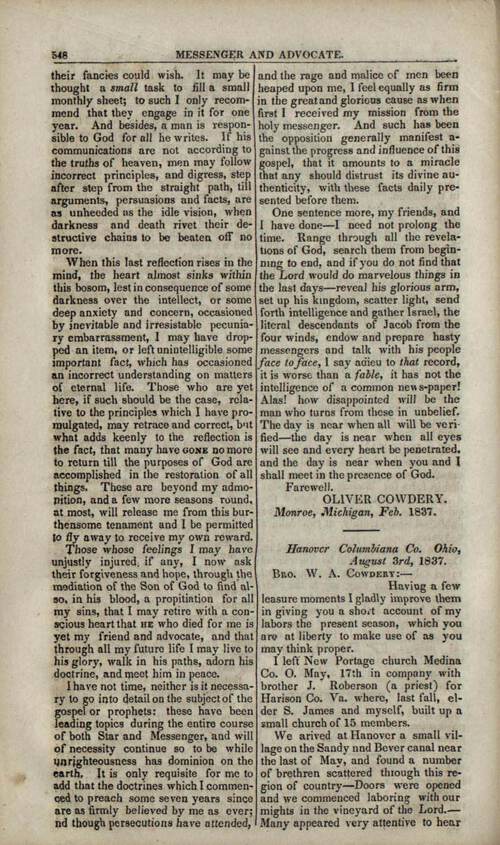 Having a few leasure moments I gladly improve them in giving you a short account of my labors the present season, which you are at liberty to make use of as you may think proper.

I left New Portage church Medina Co. O. May, 17th in company with brother J. Roberson (a priest) for Harison Co. Va. where, last fall, elder S. [Samuel] James and myself, built up a small church of 15 members.

We arived at Hanover a small village on the Sandy and Bever canal near the last of May, and found a number of brethren scattered through this region of country—Doors were opened and we commenced laborin with our mights in the vineyard of the Lord.—Many appeared very attentive to hear [548] the word and were stired up to an enquiry into these things. Some said they never heard the truth before; some said one thing and some another, and the honest in heart rejoiced to hear the fulness of the gospel proclaimed.

But here as in other places, as is to be expected, seeing our country has been flooded with such a multitude of false reports and foolish stories put in circulation by men of corrupt minds, who do not desire the truth; much prejudice existed, and those who were not willing to receive the truth because they loved it, felt disposed to arise in opposition to it.

Soon after ariving in this region I received a challenge and accepted it for a public discussion of the spiritual gifts; with a principle leader of the Campbellite order in this section of country. The debate was held at what is called the Planes meeting house, and lasted from 10 A. M. to 4 or 5 P. M. Many were enabled to discern between truth and error, and soon after three went forward into the waters of baptism. I continued preaching in the neighborhood until the conference here on the 16th of June when three more obeyed the gospel. It was the descision of the conference that I should remain in this section a while longer, I have done so, and have continued to preach and to baptize.

Not long since I had an invitation to compare the testimony for the book of Mormon with the testimony of the Old & New Testament, by one of the teachers of the Campbellite order; (by the name of Patherson,) I accepted the invitation and the investigation was held in Hanover, but before I was half through with the testimony for the book of Mormon he wished to close the debate, and notwithstanding my remonstrances and that of many of the people to the contrary, he finally utterly refused to investigate the subject any farther in this place, although when he first made the proposition to me he said, information was all he wanted, and if the testimony was good for the book of Mormon he would be glad to receive it. Although I had not the opportunity of laying the subject fully before the people, yet the cause of truth was promoted, the people saw that the same objections that were raised against the book of Mormon, might be raised against the Old and New Testament, and the arguments that would destroy one would destroy the other on the same principle. Some that were opposed before became our friends and I baptized six persons soon after. So grows the word of God and prevails, for truth is mighty and what can stand before it? “Mormonism unveiled” has been circulated in this part of the country, but that has but little influence on the minds of those who are seeking after truth: What is the chaff to the wheat? The truth is, the honest in heart will and do rejoice when they hear the truth proclaimed.

Since I came here I have held near forty meetings and baptized twelve. The church in this place now numbers thirty seven, there are also many others in this part of the country who are very friendly and believing, many of whom I think will yet embrace the new and everlasting covenant. For my part, I feel much encouraged and do rejoice to see the kingdom of God rolling onward in spite of all opposition. The prospect here is good, but I expect to leave now immediately for Va. I hope the elders traveling South from Kirtland, will give the brethren a call in this place.

Yours in the bonds of the new and everlasting covenant.