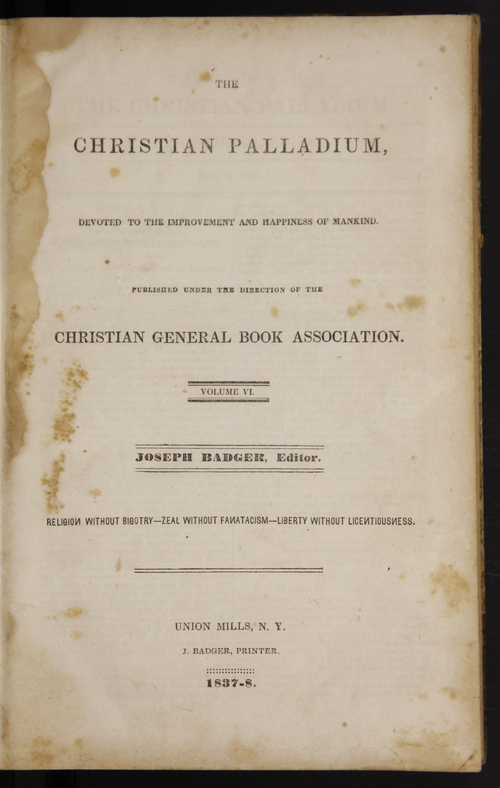 MR. BADGER, Sir:—In reading the Palladium of Jan 16, No. 18, I noticed some writings of Elder O. Barr, who says thus, “Can it be sustained by the Bible, that Jesus was born at Jerusalem, was spit upon, nailed to the cross, slain, and buried in a sepulchre?” These queries seem based upon some extracts from the book of Mormon, one of which I have read. I know Alma says, page 240, in speaking of the Son of God,

The meaning of the word at, being near to, it was perfectly proper for Alma to use the form of speech that he did; considering the situation of himself and people, they being wanderers from Jerusalem, and he having reference to the land of their forefathers, as the place where the Son of God should be born. We do not read in the Bible that Jesus should, or that he was born in Jerusalem, but we must infer from scripture that he was born in Bethlehem, or in other words the city of David. Luke ii. 11. “For unto you is born this day, in the city of David, a Savior, which is Christ the Lord.” And we are informed by writers of ancient history, that Bethlehem at the most, is but six miles from Jerusalem, and some affirm it to be nearer; but Alma’s words certainly refer to [98] the land of his forefathers, of which Jerusalem was the capital; which land of Canaan extended form the Nile to the Euphrates.

Now let us for a moment, examine the character of this personage, that was born in the city of David, as we find it recorded in the “law and the testimony.” That there is but one God, the scriptures certainly go to prove; and that he is maker of all things both visible and invisible, as well as the Savior of men. Mark xii. 29, “And Jesus answered him, the first of all the commandments is, Hear O Israel! the Lord our God is one Lord.” Isa. xlv. 5, “I am the Lord and there is none else, there is no God besides me.” 22 verse, “Look unto me, and be ye saved, all the ends of the earth; for I am God, and there is none else.” From these and similar passages, in the Old and New Testaments, I learn that there is one, and but one God; and that he is both God and the Savior, I shall proceed to show: Isa. xliii. 11, “I even I am the Lord; and besides me there is no Savior.” Hosea xiii. 4. “And thou shalt know no God but me; for there is no Savior besides me.” 14th verse, “I will ransom them from the power of the grave; I will redeem them from death.”—Isa. xlv. 21, “Who hath declared this from ancient time? who hath told it from that time? have not I the Lord? and there is no God else beside me; a just God and a Savior: there is none beside me” We must infer from the above scriptures, that there is but one God, and that he is the Savior of the children of men, for “he took not on him the nature of angels, but he took on him the seed of Abraham,” that there might be a sacrifice for the children of men, to redeem them from the curse of a broken law; therefore was God manifest in the flesh 1 Tim. iii. 16,

“God was manifest in the flesh.” Isa. says, chap. ix. 6, “For unto us a child is born, unto us a son is given, and the government shall be upon his shoulder; and his name shall be called Wonderful, Counsellor, the Mighty God, the everlasting Father, the Prince of peace.” Here then, we find that a child should be born, a son given to the children of men, who would truly be God manifest in the flesh; for we find he should be called, “The Mighty God, the everlasting Father,” &c. and consequently, must be the creator and preserver of all things, and called the Son because of the flesh. The angel says to Mary Luke i. 35, “That holy thing, which shall be born of thee, shall be called the Son of God. Also testimony from the heavens bearing record that he is the Son of God, has been given in the scriptures of divine truth, viz: Matt. iii. 17, “And lo, a voice from heaven, saying this is my beloved Son; hear him.” These scriptures show to us very clearly, that the Son is a personage of tabernacle, when we consider them attentively: and we find that he possesses all the fulness of the Father. Eph. i. 23,

“Which is his [Christ’s] body, the fulness of him that fills all in all.” Coll. i. 19, “For it pleased the Father that in him should all fulness dwell.” Coll. ii. 9, “For in him dwells all the fulness of the Godhead bodily.” Then we may clearly draw the inference that the Father and Son are one; and so says Jesus also, John x. 30, “I and my Father are one.” Also John xiv. 9, 10, 11, “Jesus says unto him, have I been so long time with you, and yet have you not known me, Philip? He that has seen me has seen the Father; and how do you say then, show us the Father? Do you not believe that I am in the Father, and the Father in me? The words that I speak unto you, I speak not of myself: but the Father that dwells in me, he does the works. Believe that I am in the Father, and the Father in me.” Now having shown conclusively where Christ was born, that he was a child, that he had a mother after the manner of the flesh, and that he is the Father and Son, we will see whether or not, he is the creator and upholder of all things. Gen. i. 1. “In the beginning God created the heavens and the earth.” Heb. i 2. [God] “Has in these last days spoken unto us by his Son, whom he has appointed heir of all things, by whom also he made the worlds.” Also Coll. i 15, 16, 17, “Who is the image of the invisible God, the first born of every creature; for by him were all things created, that are in heaven, and that are in earth, visible and invisible, whether they be thrones or dominions, or principalities, or powers; all things were created by him and for him: and he is before all things, and by him all things consist” Also John i. 1, 2, 3. “In the beginning was the Word, and the word was with God, and the word was God. The same was in the beginning with God. All things were made by him, and without him was not any thing made that was made.” From the foregoing we learn clearly, that Christ was not only God, possessing all the fulness of the Father, he being in the Father and the Father in him, he and the Father being one; the Father because he gave the Son of his fulness, and the Son because he was in the world and made flesh his tabernacle, and dwelt among the sons of men: but that he was the creator of all things that [99] there was nothing made without him that was made, whether in the heavens above, or in the earth beneath: then we find that he that created the world was in the world and the world knew him not, therefore “the prince of this world” was “cast” out; and any person who is acquainted in any small degree with his Bible knows, or at least can read, that our Savior was buffeted, spit upon, nailed to a cross, gave up the ghost, and his body was buried in a sepulchre; he fulfilling all those scriptures which spoke of his then mission into the world: therefore let all the inhabitants of the earth “Fear God, and give glory to him; for the hour of his judgment is come; and worship him that made heaven and earth, and the sea, and the fountains of waters: for I am fully aware, that there are many, even in this age of the world, who have the faculty of manufacturing gods to suit their fancy; and faiths to agree with the gods which they manufacture: hence the vast multitude of rites, ceremonies, creeds and disciplines, not in accordance with the words of the most High, which are now had among the children of men. May all who love the cause of Christ, be diligent in his service, recollecting at all times, that the prize is at the end of the race, that it is in Abraham’s seed, and not out of it, that all the nations of the earth are to be blessed. “For as many of you as have been baptized into Christ, have put on Christ. There is neither Jew nor Greek, there is neither bond nor free, there is neither male nor female; for ye are all one in Christ Jesus. And if ye be Christ’s, then are ye Abraham’s seed, and heirs according to the promise.”