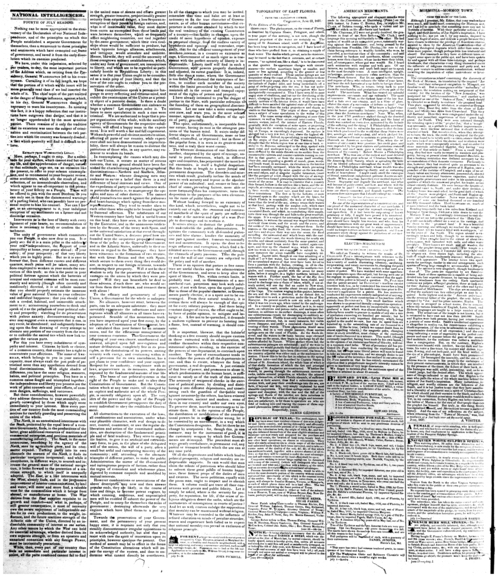 FROM THE MIAMI OF THE LAKE.

Although I presume, Mr. Editor, that your readers have seen much, and heard more, concerning the Mormon sect, yet I am led to conclude that something more may not be destitute of interest. With their particular notions of religion, and their doctrine of Joe Smith's inspiration, I have nothing to do; nor yet am I, by any means, disposed to raise the finger of scorn, and ridicule a people because they have chosen to exercise the privilege of American citizens, secured to them by the American Constitution — that of adopting theological dogmata which differ from some systems more popular, though perhaps little less irrational and absurd. But inasmuch as they have at different times occupied some space in the public eye, and have been spoken for and against with all those false colorings, and perhaps falsehoods, that characterize every thing transacted under the influence of religious excitement and party zeal, we may now venture to address candid consideration, without incurring the imputation of either malevolence or favoritism.

The circumstances related concerning the discovery of the Book of Mormon, its translation by the inspired “Joe Smith,” and their subsequent emigration to Missouri, are familiar to all. But in consequence of the “mobocracy” of that region, the revelation making an assignment of that country, for the location of the “New Jerusalem,” was postponed for “further consideration,” and another spot designated as one of the “Stakes of Zion,” which should be extended so as finally to embrace “the promised land.” This place, appointed by revelation, is situated in Geauga county, Ohio, about five miles from the shore of Lake Erie, and twenty-two miles from Cleaveland. This they call Kirtland. Here they were congregated under the authority and immediate supervision of their “great high priest,” Joe Smith. They were soon informed through the revealing agency of the “prophet Joe,” that a “temple” was necessary, as a prelude to all further improvements; and they were likewise informed that it should be constructed of brick.

But, mirabile dictu, when they attempted to burn the brick, the earth they employed for the purpose was found to be totally unfit — a circumstance that had not been looked into when the decree and revelation were made, which were consequently revoked, and an order for stone materials substituted therefor, they having “any quantity of that article on hand.” From a small beginning, they had now vastly increased in numbers and prosperity, having at present about four thousand members, so that a banking institution was declared necessary for the accommodation of their domestic commerce. Previously to this, however, they had received quite an accession to its strength and popularity in the person of S. Rigdon, once a preacher of the doctrine of Campbell, and a man of no ordinary talent and literary attainment, possessed of a shrewd and sagacious mind and business capacities, united with indefatigable perseverance and ardor in his undertakings; qualities of which the renowned prophet, his leader, seems almost entirely destitute. He soon became the favorite of, and grand vizier to, Smith; and, under their decision, a banking-house was established, for the good faith of which all the “Saints” were pledged, and Smith and Rigdon appointed president and cashier. Notes were issued to the amount of some one hundred thousand or one hundred and fifty thousand dollars. Hard times came on, much of it soon returned, and the bank failed.

Residing temporarily but a few miles from Kirtland, and hearing of these things, I felt, not a little desire to visit the “Mormon Town.” I accordingly determined to visit the place, and set my feet in the precincts of the “Holy City.” A gentleman kindly offered me a seat in his carriage, and we drove to the “promised land.” It was a beautiful Sunday morning, and although we reached the temple at an early hour, yet we found it filled with worshippers, “after the order of” Joe Smith. The region around is exceedingly broken and hilly, though by no means unproductive. They own the land to the extent of about two miles square, well furnished with mills and other water privileges. Their houses are small, and all wooden, the house of the prophet being quite small. The temple is a splendid edifice, covering, if I mistake not, sixty-eight feet by seventy-six, three stories high, including the attic, built of rough stone, handsomely stuccoed, which gives it a very rich appearance. The interior forms two apartments for meetings, similar in size and arrangement, each apartment being large enough to accommodate 1,200 persons. The interior is very singularly, though handsomely “done off”. The joists are supported by six fluted columns. Each of these apartments is capable of being subdivided into four separate divisions, by canvass curtains let down by windlasses from the ceiling. Each apartment contains six pulpits, arranged gradatim, three at each end, for the “Aaronic priesthood,” and at the other end for the “priesthood of Melchisedec.” The slips are so constructed that the audience can face either pulpit as may be required. In the highest seat in the “Aaronic priesthood” sits the reverend father of the prophet; the next below is occupied by “Joe,” and his prime minister, Rigdon. The attic story is occupied as school rooms, five in number, where the various branches of English, Latin, Greek, and Hebrew languages are taught to a large number of students. The actual cost of the temple is not known, but it is estimated to have cost not less than $60,000. Smith and Rigdon were both present, having just returned from a journey of some weeks. Smith's intellectual appearance is altogether in medias res, his countenance exhibiting a blank expression (if the term be admissible in reference to a countenance destitute of all expression,) and the only thing indicating a sense of superiority is his perfect composure and ease of manner before the gaze of the assembled multitude, for the audience was rather a multitude than a congregation. But, on the contrary, Rigdon's countenance beamed with intellect, his eye dark and lustrous, his voice a fine tenor, his manner and diction vigorous, flowing, and not inelegant, and his head withal, in the eye of a phrenologist, would have been pronounced “good.” He harangued the assembly, and the aim of his address was to reconcile his people to the endurance of their present embarrassments, in which they are involved by the pressure of the times, the failure of their bank, &c. His harangue was mild, artful, insinuating, and, as far as I could judge, had the desired effect. The whole appearance of things indicated to my mind that Rigdon is the man who pulls the wires of the whole machine behind the screen of Joe Smith's inspiration. Many industrious, intelligent, and worthy citizens are the followers of Joe Smith, and it is but justice to say that they have manifested a liberality of sentiment and a spirit of Christian charity which should put their enemies to the blush, and which many of their bitterest persecutors would do well to imitate. Yet, in my estimation, Sydney Rigdon can better translate the tables of Mormon for the ears of that people than can the prophet Joe himself. But truly, in this thing, Smith has signalized himself, and Mormonism become a matter of history. And the sum of my reflections on the subject, when returning from the “Town of Mormon,” was, that a madman or a fool hath ever set the world agog.