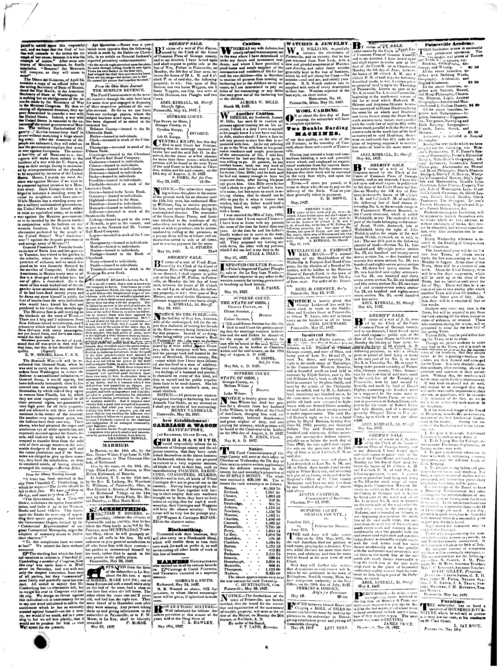 It is an old remark, that a man is known by the company he keeps. Your bosom associate is the imposture Smith, the impious fabricator of gold bibles—the blasphemous forger of revelations, with which he swindles ignorant people out of their hard-earned property. His audacity does not stop with the property. Emboldened by success in his wicked schemes, he hesitates not to use his authority as the revelator of the will of Heaven, to incite his followers to remove those who have opposed his treachery and fraud, by assassination. Deluded and frantic by his pretended revelation, that it was the will of God, that I should be destroyed, two of the saints of the latter day, by concert, and under the express direction of their prophet, this high priest of satan, meet in the night, at a little distance from my house, with loaded rifles, and pistols, with a determination to kill me. But as they draw near the spot where the bloody deed was to be performed, they trembled under the awful responsibility of committing murder, a little cool reflection in darkness and silence, broke the spell of the false prophet—they were restored to their right minds, and are now rejoicing that they were not left to the power of the devil and co-adjutor Smith, to stain their souls with a crime so horrible. While these scenes were planned by the prophet, and promises of great temporal and spiritual good lavished upon these two men, by him, to stimulate them to assassinate me in my own house, in the midst of my family, and in a moment when I was defenceless and suspecting no danger, you was busy in preaching the infallibility of this prophet, and with an impudence and volubility peculiar to yourself, sustaining his ridiculous and heaven-daring pretensions to the power of working miracles. And it requires more charity than a good man is required to possess, to believe, that while you were clamorously holding him forth as a prophet, you did not know that he was exerting his influence over his bewildered followers to procure my death, because I fearlessly exposed to the contempt and indignation of an outraged community, your flagitious plans.

Is it not time for the People to give attention to impostors who preach murder and assassination by pretended revelation from heaven.