Mormonism: Scene in a Stage Coach 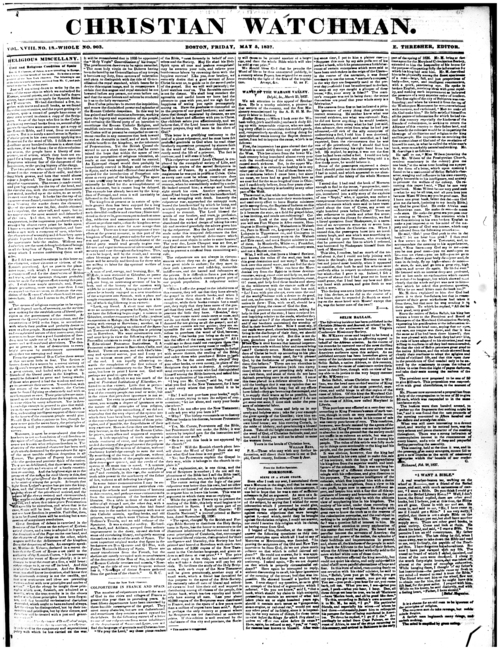 From the Buffalo Spectator.

SCENE IN A STAGE COACH.

Soon after I took my seat, I ascertained there was a Mormon in the stage, and that he was one of their preachers: from which circumstance, I was led to hope that he was a man of sufficient substance to feel an argument. As soon as a favorable opportunity presented itself, I introduced the subject, by saying that I wished for some information which I presumed he could give, respecting the mode of defending their scheme, against certain objections that were brought against it,—and which, could they be brought against the christian religion, I could not answer, nor could I receive this religion with its claims, as having come from God.

I begged of him, therefore, at the outset, to answer the following questions: as they contained principles upon which all I had to say of Mormons or Mormonism, was founded. “In proving the scriptures of the Old and New Testaments to be from God, do we not place much reliance on that which is called internal evidence?” He could not answer, for it was apparent to all, he did not know what was internal testimony. I asked again, “Do we not depend on that which is properly circumstantial evidence?” Here again he attempted to reply, without discovering to us all, his utter ignorance of the meaning of the terms; but that was impossible. He showed himself a perfect baby here. I next shaped my question, so as to give an example of the kind of argument to which I referred. “Do you not know,” said I, “that a book, which should lay claim to high antiquity, pretending to contain an account of what had taken place six or eight hundred years ago, should it contain such terms as “gunpowder, steam-engine, or rail-road car,” would not need any other proof of its falsity, since it is impossible, in the very nature of things, for those terms to exist before the things for which they stand;—unless an effect can exist before its cause?” Here, again, he refused to say, “yea,” or “nay,” for reasons best known to himself.

After waiting some time, I put to him a plainer case:—“Suppose this man by my side pulls out of his pocket a book, which he pronounces a faithful account of certain enterprises which were said to have been undertaken in the reign of the Czars—in the course of the narration, it was found necessary to use the terms, “mariner’s compass,” in the way they are frequently used at the present day;—should I not be authorized to declare, as soon as my eye caught a glimpse of these terms, “Sir, your story is false?” The mariner’s compass was not in being then: the terms themselves are proof that your whole story is a fabrication.”

His answers from first to last indicated a pitiable ignorance of every thing that pertains to correct reasoning. He neither knew what was internal evidence, nor what was external: Nay, he did not know any thing; he would hesitate, and stammer, then unsay what he had just said, then advance, then retire from what he had just advanced,—till sick of the silly enterprise of undeceiving a fool, I told him I was deceived, disappointed, chagrined, and mortified, as I had expected, from the circumstance that he was one of the priesthood, that I should find him capable of discerning his right hand from his left. He replied, by saying, it was not the first time he had been called a fool. I could not help feeling a strong desire, that after being told it a few times more, he would believe it.

Some of the passengers expressed a desire that I should point out the circumstances which I had in mind, and which appeared to me abundant proofs of the falsity of the whole Mormon story.

I stated that I had read the book of Mormon enough to find in the terms, “gunpowder, mariner’s compass,” and several others of recent origin, introduced into a silly story of the exploits of one “Nephi,” who, it appears, was rather a conspicuous character in the affair, and the story related to events which were said to have transpired about the time of Cyrus, say seven or eight hundred years before Christ! There are also references to pistols and other fire arms; and, what caps the climax for absurdity, we find a literal quotation from Shakspeare, in a narration of an occurrence some six or seven hundred years before the Christian era. When I named this, the passengers burst into an involuntary laugh, and one which was something increased by the poor Mormon, who remarked, that he presumed the line to which I referred, was borrowed by Shakspeare himself from the book of Mormon!!

This idea, I confess, had so much of the novel about it, that I could not help joining with them in the laugh; the poor Mormon came in last and joined most heartily, when it appeared so manifest, that both he and his scheme were perfectly alike in respect to substance—nothing but wind—that I gave it up. Indeed, I felt a degree of shame that I had gone out to hunt so small game, that I had bent my bow and filled my hand with arrows, and gone forth to war with a wren.

This feeling was not a little increased, by hearing him declare, as he did in the course of a few hours, that he regarded Jo Smith as standing on the same level with Moses! except that Jo, was the better man of the two!!