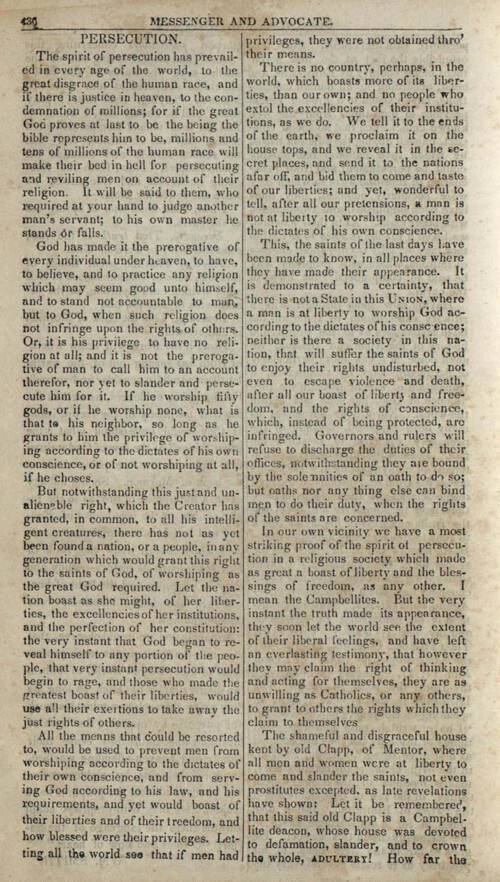 In our own vicinity we have a most striking proof of the spirit of persecution in a religious society which made as great a boast of liberty and the blessings of freedom, as any other. I mean the Campbellites. But the very instant the truth made its appearance, they soon let the world see the extent of their liberal feelings, and have left an everlasting testimony, that however they may claim the right of thinking and acting for themselves, they are as unwilling as Catholics, or any others, to grant to others the rights which they claim to themselves.

The shameful and disgraceful house kept by old Clapp, of Mentor, where all men and women were at liberty to come and slander the saints, not even prostitutes excepted, as late revelations have shown: Let it be remembered, that this said old Clapp is a Campbellite deacon, whose house was devoted to defamation, slander, and to crown the whole, ADULTERY! How far the [436] priests, who frequented his house, have criminated themselves in this last act of impropriety, remains yet to be disclosed; but people have a just right to draw their own conclusion, respecting the character of the priests, from the company they keep, and the character of the house they frequent.

Adamson Bentley, of will-making memory, was one of the loungers about the pious old deacon's house. Now had he have gone there to have reproved his wickedness, and to have purged his house of harlots, then, indeed, his visits might have done him honor; but when it was to be a partner in his slanders, he is entitled to a full share of the disgrace of his house. Indeed, Mary, the wife of Adamson, has been trying to palliate the old man's crimes, by telling how he was tempted, and that the temptation was too strong for him to bear. O Mary!! You had better found some better excuse for your good old deacon, at whose house you have had the blessed privilege of slandering the saints so shamefully, than this; for it does not tell very well, for a pious, good old soul to have, and to keep, females about his house, whose characters are so loose. This is that Mary who has been so well dealt by in old Mr. Brooks' will, as to get a double portion of the estate: one portion left directly to herself, and another to come to her through her mother, Mrs. Holmes, now of Indiana; while the old man's children are left, some of them, without; and others, a small portion, to be given them when their companions die: in the mean time, the executors, with Bentley at their head, to have the use of the property until then.

One of the executors is also, like old Clapp, a Campbellite deacon. I mean Richard Brooks, who, with his wife Rachel, united with the before mentioned kidney in slandering and vilifying the saints of the last days, and kept a house devoted to slander, for years; notwithstanding the very persons whom they were slandering, were at that very time, and at this, hiding the shame of their family, which if exposed, must bring them to open disgrace.

One of the great cries of this horde of iniquity against the saints, was, that they were trying to get people's property into their hands, and to cheat them out of their just rights. Now, for the sincerity of this plea, as made by this band of persecutors, it is only necessary to let the public know, that this Adamson Bentley used his priestly influence, to help old Mr. Brooks make his will, by which the old man's children were cheated out of their just rights, and his wife (who is an illegitimate child in the family, and of course her very existence a disgrace to them) either directly, or indirectly, got as much of the estate as two of them, yea, a great deal more.

Of course, then, gentle reader, after this man Bentley has given such high proof of his deep anxiety for the rights of others, he would, certainly, use his greatest influence to guard the world against being cheated by the saints.

It will be hard to persuade us, or any other persons who are acquainted with the circumstances, that nine-tenths of all the lies put in circulation against the saints, did not originate with the before mentioned gang.

That the public may have some faint idea of what the saints have had to bear from them, it will only be necessary to tell them that when this brood could do nothing else to injure the saints, they actually sent their children, from thirteen years old and upwards, to their houses, to sauce and scandalize them. I speak this from experience: never was my house so abused and scandalized, by any human beings, since I kept a house, as it was by a gang of these creatures' children, sent from Richard Brooks', in Warren, and Adamson Bentley's. I am now convinced, and always shall be, that there are no children on earth who would act as basely as they did, unless they were put up to it, and encouraged in it, by their parents. And then to finish the matter, after they went away, they hatched up and told some of the basest lies, that could be invented by human beings; [437] and when I complained to Adamson Bently of their conduct, he tantalized me, and justified the children in what they did; though he knew that they had told base lies. And what adds to this whole matter is, that these children were members in the Campbellite church; Adamson Bentley was their preacher, and Richard Brooks deacon: truly as priest, so people. Not only this once, but at different times, I have been insulted, and so has my house, by children from these hordes of impudence and ill-breeding, and dens of slander.

Had this band of persecuting Campbellites, came out like men, and attacked the religion of the saints, and conducted themselves with common decency, then there would have been no reason to say why do you so? nor would any have found fault. but instead of this, to think to put down the truth by shamefully slandering, villifying and abusing the saints of the Most High, is so great an outrage upon all common decency, as to subject them to the scorn of every well wisher to society; more particularly, since they have fallen in the pit which they had dug for others.

It is a fact, kind reader, whether you can believe it or not, that the said old Clapp, with his two pious sons, one of them a Campbellite priest, the other the most pious man of the whole kidney, did actually go and swear, before a justice of the peace, that they would not believe any of the saints under oath; when there was not one out of fifty of them, whose names they had ever heard, nor of whom they had the most distant knowledge; and knew nothing about them, still they were ready to swear, without the most distant knowledge of them, that they would not believe them under oath. If this does not amount to false swearing, in the sight of the great Jehovah, I must confess I do not know what does.

There is perhaps no people now living, who have said more about the rights of conscience, than this brood of persecuting Campbellites: it has formed a part of all their public performances; they have called upon people every where, to think and act for themselves, as their just right, to call no man master on earth, nor any father; but take the bible and think and act for themselves. But, gentle reader, pause, and marvel!!!! It is one thing for a people to pretend to liberality, and it is quite a different thing for them to be so in feelings. Have we not all the evidence that can be given, that these pretensions are the basest hypocrisy? What have the saints done to enrage the malice, and excite the wrath of this gang of persecuting Campbellites? O! they have taken the liberty of thinking and acting for themselves, they have chosen to worship according to the dictates of their own consciences.

This is their great crime, this is what has set the bristles of Campbellism all on end; this indeed, YES, THIS, has armed their piety with vengeance, and their tongues with lies: INDEED, gentle reader, it is this and nothing else but this, that has made Campbellism shew its teeth. This is the great crime of which the saints have been guilty, and for which Campbellism has poured out its acrimony.

One thing has been done by the coming forth of the book of Mormon; it has puked the Campbellites effectually, no emetic could do half so well.— Lobelia is not a circumstance to it— it has searched for the nethermost corner of their stomachs, and found it, and exposed the secret feelings of their heart. Never more, then, let Campbellism boast of liberty of conscience, no more let it boast of freedom of thought, or of human rights.

Let the advocates of that faith, from henceforth tell the truth. Let them declare to the world, that they can have full liberty to think and act for themselves, providing they do not think and act in opposition to Campbellism; for if they do, they will destroy them if they can, and then they will tell the truth.

The book of Mormon, then, has revealed the secrets of Campbellism, and unfolded the end of the system. Every eye may see, and every heart understand; for the public may depend upon it, that the vomit which it has received, is too severe for it; it has spewed itself to death, and in a very short time it will have fled the Lake shore, to appear no more forever.

We are well aware that we have written in great plainness; but we are also satisfied that we were called upon to do so, it is a duty we owe to ourselves and family, as well as to the saints in general, and also to the public, to let them know the source from whence such infernal lies as have been put in circulation, have emanated and also what kind of characters were employed in putting them in circulation.

We have hinted at some things which are brutal in the extreme, and found no where but among the most beastly of the human race; yet it is a fact, that they are found among the Clapp Campbellites, (for such we will call them, to distinguish them from others of the same society, who are not identified with their iniquities.) And we know that the most distant allusion to them, is calculated to offend the delicate ear; notwithstanding this, we feel ourselves bound to bring them to view, as we want other generations to read the history of our persecutions, and our children, and our children's children to know of our persecutions, and of the characters by whom their fathers were persecuted.

And as our periodical is intended for a book, to be bound, and handed down from generation to generation, among our children, it is the proper place to publish such things.

Having said so much, we take our leave for the present.