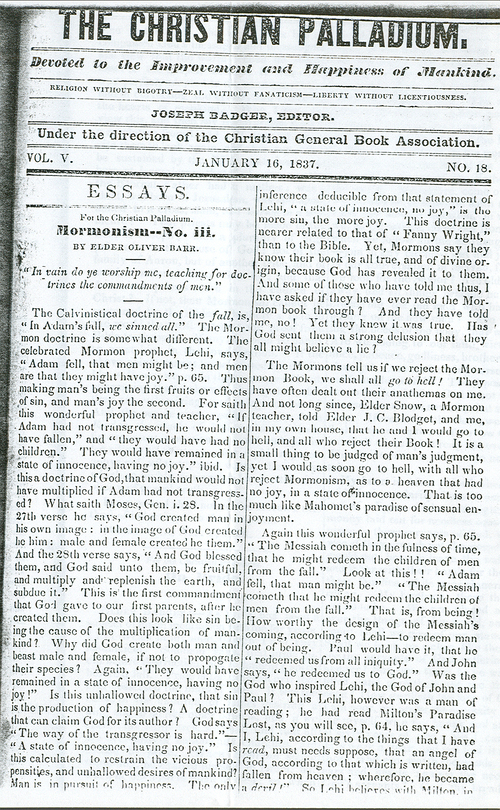 “In vain do ye worship me, teaching for doctrines the commandments of men.”

The Calvinistical doctrine of the fall, is, “In Adam’s fall, we sinned all.” The Mormon doctrine is somewhat different. The celebrated Mormon prophet, Lehi, says, “Adam fell, that men might be; and men are that they might have joy.” p. 65. Thus making man’s being the first fruits or effects of sin, and man’s joy the second. For saith this wonderful prophet and teacher, “If Adam had not transgressed, he would not have fallen,” and “they would have had no children.” They would have remained in a state of innocence, having no joy.” ibid. Is this a doctrine of God, that mankind would not have multiplied if Adam had not transgressed? What saith Moses, Gen. i. 28. In the 27th verse he says, “God created man in his own image: in the image of God created he him: male and female created he them.” And the 28th verse says, “And God blessed them, and God said unto them, be fruitful, and multiply and replenish the earth, and subdue it.” This is the first commandment that God gave to our first parents, after he created them. Does this look like sin being the cause of the multiplication of mankind? Why did God create both man and beast male and female, if not to propogate their species? Again, “They would have remained in a state of innocence, having no joy!” Is this unhallowed doctrine, that sin is the production of happiness? A doctrine that can claim God for its author? God says “The way of the transgressor is hard.”—“A state of innocence, having no joy.” Is this calculated to restrain the vicious propensities, and unhallowed desires of mankind? Man is in pursuit of happiness. The only inference deducible from that statement of Lehi, “a state of innocence, no joy,” is the more sin, the more joy. This doctrine is nearer related to that of “Fanny Wright,” than to the Bible. Yet, Mormons say they know their book is all true, and of divine origin, because God has revealed it to them. And some of those who have told me thus, I have asked if they have ever read the Mormon book through?

And they have told me, no! Yet they knew it was true. Has God sent them a strong delusion that they all might believe a lie?

The Mormons tell us if we reject the Mormon Book, we shall all go to hell! They have often dealt out their anathemas on me. And not long since, Elder Snow, a Mormon teacher, told Elder J. C. Blodget, and me, in my own house, that he and I would go to hell, and all who reject their Book! It is a small thing to be judged of man’s judgment, yet I would as soon go to hell, with all who reject Mormonism, as to a heaven that had no joy, in a state of innocence. That is too much like Mahomet’s paradise of sensual enjoyment.

Again this wonderful prophet says, p. 65. “The Messiah cometh in the fulness of time, that he might redeem the children of men from the fall.” Look at this!! “Adam fell, that man might be.” “The Messiah cometh that he might redeem the children of men from the fall.” That is, from being! How worthy the design of the Messiah’s coming, according to Lehi—to redeem man out of being. Paul would have it, that he “redeemed us from all iniquity.” And John says, “he redeemed us to God.” Was the God who inspired Lehi, the God of John and Paul? This Lehi, however was a man of reading; he had read Milton’s Paradise Lost, as you will see, p. 64, he says, “And I, Lehi, according to the things that I have read, must needs suppose, that an angel of God, according to that which is written, had fallen from heaven; wherefore, he became a devil! ” So Lehi believes with Milton, in [273] the war of angels above. But, leaving “Adam’s fall,” and Lehi’s devil, I will pass on.

This same Lehi who lived 600 years before the Christian era, was a staunch believer in the doctrine of the Trinity, and of the two natures in Christ. Doctrines that were never heard of in the Jewish church, nor in the Christian, till after its apostacy. He says his records, or the records found in the celebrated plates of Mormon, “shall make known to all kindreds, tongues, and people, that the Lamb of God is the Eternal Father.” p. 51. What God is the Eternal Father the Lamb of? Again, says Lehi, p. 25, “And he said unto me, behold, the vision which thou sawest, is the Mother of God.” Thus you see Lehi was a Roman Catholic, 600 years before the Christian era. Again, “I looked, and beheld the virgin again, having a child in her arms, and the angel said unto me, behold the Lamb of God, yea, even the Eternal Father.” There Lehi saw the Eternal Father, whom Jesus says “no man hath seen at any time;” and Paul says, “whom no man hath seen or can see.” But when Lehi saw him, he was only a child in his mother’s arms. Did the Eternal Father have a mother? Was he ever a child? If so, who was his father?

The above is a specimen of the Mormon trinity. But that is not the worst of it.—

What blasphemy!! What inconsistency, and contradiction of the sacred oracles! Where is it expressed in the Bible, or from what book, chapter, or verse in scripture can it be inferred, that the Eternal Father, the “Creator of all things,” was spit upon, nailed to a cross, slain, and buried in a sepulchre? The immutable God die! The creator of all things buried in a sepulchre!! This is too inconsistent to need refutation. And yet Mormons say they know it is true; that God has revealed it to them by his spirit; and that we must believe it or be damned! But can candid, reflecting men believe such an absurdity, such an utter impossibility? We are not to understand this as the Orthodox teach, that it was as man, or in his human nature that he died. For says Jacob, p. 74. “The great Creator suffereth himself to die for all men.” “Not a sacrifice of man,” “for it shall not be a human sacrifice, but it must be an infinite and eternal sacrifice.” p. 319. And Alma saith, p. 338. “Therefore, God himself atoneth for the sins of the world.” Was there no other reason, the above inconsistent sentiment is reason enough why every lover of religion and the Bible, should reject as one of the basest impositions, the Mormon Book.

I do not give this expose of the Mormon Book, because I have any malignant feelings towards that people, far from it. But when the whole Catholic and Protestant community are unchristianized; when a new system of religion is introduced; a new Bible presented for our acceptance; and men, professing to be divinely inspired, deal out their awful anathemas of death and damnation on all who reject their theory, I think it time to awake, and see what claims they have to our attention. The Mormon Book is either a revelation from God, or one of the basest of impositions. If it is a revelation from God, it is our duty to receive it. If an imposition, to reject it. With this view of the subject, I have candidly examined their book, digested its doctrines, and then “searched the scriptures to see if these things are so.” Finding in its general character, no relation to the Bible, I have designed to concentrate some of its general features, hoping thus to aid others in discovering its deformities, and so shun its delusions.

Although I have given but a specimen of its general features, yet I ask every sober, candid lover of truth, who can take a view of the entire want of even one, of those di- [274] vine testimonials, that in all ages has accompanied God’s messages and messengers, and view that the world needed no supplement to the gospel, because it was every way perfect, adapted to the wants, and effectual in correcting the errors, and reforming the hearts of mankind. Who, I say, can view this, and then say the Mormon Book is a revelation from God? If any, let me invite them to look again, and then say, can it be sustained by the Bible, that Jesus was born at Jerusalem; that God, the creator, the Eternal Father had a mother: was a child, was born at Jerusalem, was spit upon, nailed to a cross, slain, and buried in a sepulchre? That priests may be made of the tribe of Joseph; that a plurality of high priests be in the house of God; not of the family of Aaron, but of another tribe, and of another nation, even of Gentiles; and that Aaronical priests serve in the church of Christ? If not, then Mormonism cannot be sustained by the Bible. Is there a man in the world that will attempt the proof from Bible testimony? If any, I would be happy to meet him in the investigation. If the above points cannot be supported by the Bible, well may we say in the language of Paul, concerning the teachers of that system, that they are “deceiving, and being deceived.” And the people more readily receive from Rigdon, the oracle of Mormonism, ridicule for argument, assertion as proof, and prefer his silly witticisms, specious sophistry, metaphysical subtlety, and coarse buffoonry, which so highly distinguish him, to the simplicity of gospel truth.

In my next, I shall notice the Mormon method of inducting into the kingdom.