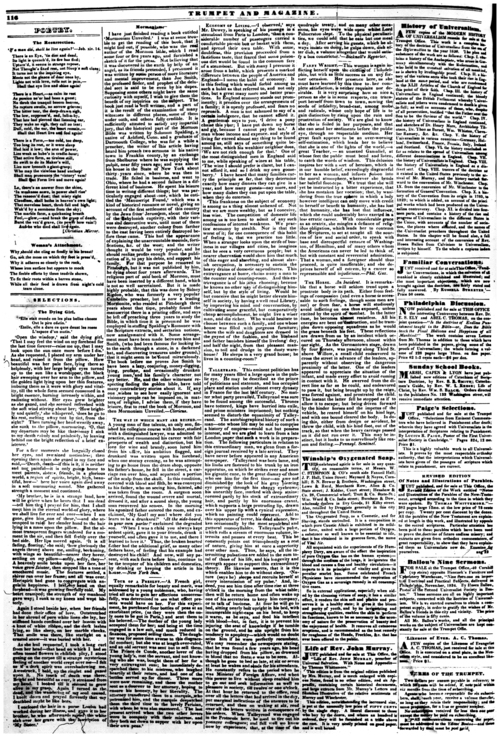 I have just finished reading a book entitled ‘Mormonism Unveiled.’ I was at some trouble to get the reading of this book, that I might find out, if possible, who was the real author of the Mormon bible, which I read some four or five years ago, and furnished a sketch of it for the press. Not believing that it was discovered in the earth by help of an angel, as its friends pretended, I presumed it was written by some person of more literature and mental improvement, than Joe Smith, the professed finder, and prophet of the deluded sect is said to be even by his dupes. Supposing some others might have the same curiosity with myself, I wish to give them the benefit of my inquiries on the subject.

The book just read is well written, and a part of it is the result of the examination of many witnesses in different places, some of them under oath, and others fully credible. It is sufficiently attested to satisfy any impartial jury, that the historical part of the Mormon Bible was written by Solomon Spalding, a native of Ashford, Conn. and a graduate of Dartmouth College, who was for a while a preacher, the writer of this article having heard him preach two sermons in his native town of Franklin county, by an exchange from Shelburne where he was supplying the pulpit, near fifty years ago; and was also at his house in the State of New York about thirty years since, where he was then in trade.

He failed in business, and went to Ohio, where he had a second failure in a different kind of business. He spent his leisure time in writing different things; but was particularly engaged about one, which he entitled the ‘Manuscript Found,’ which was a kind of historical romance or novel, giving an account of the first settlement of this country by the Jews from Jerusalem, about the time of the Babylonish captivity, with their various and destructive wars, until most of them were destroyed, another colony from farther to the east having been entirely destroyed before these came. This had the appearance of explaining the unaccountable mounds, fortifications, &c. of the west; and the writer thought it would be very popular, and he should realize profits enough from the publication of it, to pay his debts, and support his family. For that purpose he removed to Pittsburgh, but it was not published by him, he dying about four years afterwards. The religious part of said book of Mormon, must have been inserted by a different hand, which is not so well ascertained. But it is made highly probable, that this was done by Sidney Rigdon, who was formerly a very popular Cambelite preacher, but is now a leading Mormonite, who resided at Pittsburgh three years about that time, probably found the manuscript there in a printing office, and says he left off preaching three years to study the Bible, in which time it is presumed he was employed in stuffing Spalding’s Romance with the Scripture extracts, and sectarian notions, now amalgamated with it.

Some arrangement must have been made between him and Smith, (who had been famous for looking into the earth through a stone, in a darkened hat, and discovering treasures under ground,) that it might seem to be found miraculously. The book before me proves Joe Smith to have been a lazy, conjuring, money-digging, lying, profane, and occasionally drunken young man, and his family’s character not any better. He, and the other witnesses respecting finding the golden bible, have told many contradictory stories about it. If any one wishes to see how easily ignorant and visionary people can be imposed on, in matters of religion, I advise them, if they have leisure, first to read the book of Mormon, and then Mormonism Unveiled.