This wisdom descendeth not from above. “Mormonism–No. 2” 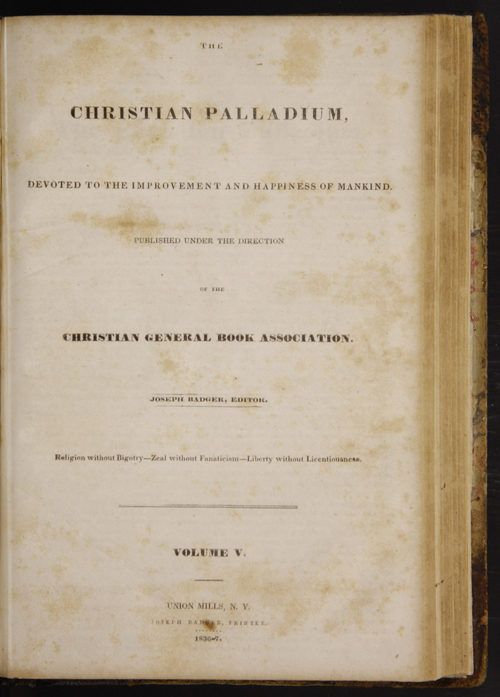 “This wisdom descendeth not from above.”

That the origin of the MORMON BOOK is not divine, is evident from the fact

1. It is not accompanied by one of those testimonials which has formerly accompanied divine revelation. When the Law was given at Sinai, it was handed down from God in the presence of all the people, and accompanied with the most awful testimonials of the divine Majesty. When Jesus Christ came down from heaven as the messenger of grace and truth; not only did angels announce his birth, but at his baptism, in the presence of all Judea and Jerusalem, the Holy Spirit lowered down in a bodily form, and rested on him, while the Eternal Being audibly declared “This is my beloved Son;” and at another time added, “hear ye him.” But where is the divine testimony that JOSEPH SMITH is God’s messenger? Or where the divine testimonials in favor of the Mormon Book? There is not one! True, Cowdry, Whitmer and Harris, with others, have witnessed that they saw and handled the plates; but this does not prove what we want. I do not doubt but they saw and handled plates.— But did they see them buried? Do they know that Smith did not bury them? The query is not whether Smith had plates; but who made them? When, and by whom were they buried? It would not be very hard for any one to find plates in the earth, and to prove that they took them out of the earth; but it would be difficult to prove that God ordered those plates to be buried there! Did God order the Mormon plates buried? Let it be proved. It has not been.

2. It is evident that the Mormon book is not of Divine origin from the fact—It was not needed. When the Gospel was introduced it was needed. The world was enveloped in an awful moral darkness. At that time there was no system of morals competent to reform them. The best system of morality only laid on external restraint. But the morality taught by our Lord, did not stop here—it went much deeper—it imposed its restraints where they ought to be, on the thoughts, and on the heart. And has not the Gospel been effectual where it has been received and obeyed? If the Gospel has not lost its power to renovate the heart, and reform the life, where is the necessity of another revelation? The Gospel has not lost its power, therefore another revelation is not needed. And would God send us a system we did not want—that could be of no use? If he sent us the Mormon Book he has sent us such a system. Unless the Mormon Book is better than the Bible, we have no use for it. Why do we need it, if we can supply no deficiencies of the bible? We must find deficiencies in one, before we can see need for the other. If God has sent us the Mormon Book, it must be for the noble purpose of effecting some good? Many from different denominations have gone over to the Mormons: but are they better? Are they more humble, more affectionate, or more charitable? Do they possess a more meek and quiet spirit? Are they more like Christ than others—or than they were before? Those who are acquainted with the fruits of Mormonism, will not accuse me of exaggeration, if I only say, it makes them ten fold more intolerant, bigoted, and pharasaical than they were before. As a specimen of the Mormon spirit, hear this; Mr. S. Rigdon, a high priest declared it would not be safe for me to come to Kirtland, and talk as I write, for if I did, he would cuff my ears! Is that like Jesus? Is that the fruit of his spirit? Or is it the spirit that would command fire to come down and destroy those who follow not with us?

The Mormons hold forth their book as a counter part to the Bible, and of equal authority with it. But we have not more [241] strong evidence that Joseph Smith did not create the world, than that God is not the author of both the Mormon book and the Bible.

Look at the design, the low style, and the vulgarisms that are found in every part of the book, then compare it with the noble design, the inexpressible sublimity, the exquisite beauty, and the pure morality of the Bible, and then ask, could they both have had one author? The bible was from above, with God for its author. The Mormon book was from the earth, with “JOSEPH SMITH, Junior, for its author and proprietor,” according to the title page.

3. The Mormon book had not God for its author, from the fact, it positively contradicts the Bible. The prophet Alma says, p. 240, “And behold he [Christ] shall be born of Mary at Jerusalem.” The prophet Micah said he should be born at “Bethlehem,” which is six miles south of Jerusalem. Were both of these prophets inspired?—What wonderful faith Mormons have to believe both of these prophets true. Which of these prophets shall we believe? In the mouth of two or three witnesses, every word shall be established. An Angel from heaven declared to the shepherds, “Unto you is born this day in the city of David, a Savior, which is Christ the Lord.” Luke ii. 11; and in ver. 4, Luke says, the “city of David is called Bethlehem,” and that there Christ was born. Math. ii. ch. declares that the wise men found the young child there. Thus Alma is found a false prophet. This Alma prophesied less than 100 years before Christ was born. But can even Mormons believe he spoke by inspiration? Did the God who told Micah that Christ should be born at Bethlehem, and sent his angel to tell the shepherds he was born there, tell Alma he “should be born at Jerusalem? What blasphemy! What an imposition upon the credulity of the ignorant! If Smith is as ignorant as he is reported to be, he may have been honest in making Alma fix on Jerusalem, as the birth place of our Lord. But what shall we say for those who know more? Are they honest when they declare that God has revealed it to them, that Alma is a true prophet? This they do declare.

Look at Lehi’s perversion of Isaiah xlix. 8th and 9th, and say did he write by inspiration? Thus he gives it, “Thus saith the Lord, in an acceptable time have I heard thee, oh, isles of the sea, and in a day of salvation have I helped thee, and I will preserve, thee and give thee my servant for a covenant of the people, to establish the earth to cause to inherit the desolate heritages, that thou mayest say to the prisoners, go forth,” &c. The expressions “Oh, isles of the sea,” and “my servant,” are not found in the true text. This reading entirely perverts the meaning of the text. It makes God address the “Isles of the Sea, instead of his Son. It makes the Isles of the sea, say to the prisoners, go forth. But Isaiah, not only here, but elsewhere, declares that Christ shall “proclaim liberty to the captives.” It was Christ, whom God promised to hear, and to uphold, and who should say to the prisoners go forth: not the “isles of the sea.” But why this perversion? It is to make the prophet appear to speak of Joseph Smith, as God’s servant, whom he would give. If any of the old prophets ever alluded to the prophets of Mormonism, it must have been Jer. v. 12, where he says, “They have belied the Lord.” Also, xxiii, 25, 26. “They are prophets of the deceit of their own hearts.” Also Zeph, 3, 4. “Her prophets are light and treacherous persons, her priests have polluted the sanctuary, they have done violence to the law.” Did not Nephi do violence to the law, when he “consecrated Jacob and Joseph that they should be priests over all the land? p 73. The law limits the priesthood to the tribe of Levi.—But Nephi transferred it to the tribe of Joseph. Jacob and Joseph whom Nephi consecrated, were of the tribe of Joseph. The law confined the high priesthood to the family of Aaron. The Nephites made Alma high priest. The law admitted but one high priest in the church at one time. But the Nephites, while they professed to keep the law, had Ammon, Giddonah, and Alma high priest in the church, at the same time. p 304. At another time, Helleman and his brother officiated in that office at the same time. p 350.

Thus “doing violence to the law.”

The Mormons at Kirtland have gone farther yet. They have tranferred the priesthood from one nation to another.—From Jews to Gentiles, and have three grades of the Aaronical priesthood, officiating in their temple at Kirtland; all made out of Gentiles, all owned and blessed of God—when God has declared, Num. iii 10, “That the stranger that cometh nigh [to officiate as priests] shall be put to death.” Is God a liar—or is the Mormon system an awful delusion? Again, they have three grades of the Melchesedeck order officiating in the same temple, and the same church. Thus making Mormonism neither Judaism nor Christianity, but both perverted, then compounded.

Neither the Jewish, or Christian Church, [242] ever had more than one high priest over it at once, by divine direction. The Jews “truly had many priests because they were not suffered to continue by reason by death.” Jesus Christ is now “high priest over the house of God.” But the Mormons have a plurality of high priests over their house, all made of Gentiles. Thus making void the law of God by their traditions.” Nor is this all.

The Jewish “high priests entered into the holy place every year with the blood of others.”

Smith has provided no holy place for his Aaronical priests, nor do they offer sacrifices.

What presumption! What blasphemy! Professing to be God’s high priests, yet have neither tabernacle to enter, nor sacrifice to offer!—Christ, our high priest of the Melchisedeck order, has entered into “the holiest of all,” in the true tabernacle, which God pitched, and not men,” even into heaven itself. This is the only place or tabernacle for the Melchisedeck high priest, for “When Christ was on earth he could not be a priest.”

Heb. viii. 4. Sidney Rigdon professes to be a high priest of the Melchisedeck order. Has he any gifts to offer, or sacrifices for his people? Does he enter into the inner tabernacle, not with the blood of the others, but with his own blood? The Melchisedeck high priest must be, “holy, harmless, undefiled.” Does he possess this character? It was necessary that Christ, as high priest, “should have somewhat to offer.” Therefore he “offered up himself.” What resemblance can even Mormons see, between their high priests, and the priests of God’s house—or what relation of their system, to the Gospel Paul preached?

Paul says the mystery that the Gentiles should be fellow heirs, was not made known to other ages, as it is now revealed by the spirit, unto the holy Apostles.” Smith has Nephi declare the same mystery 600 years before Paul was converted.

What I have presented of contradictions, and perversions of the Bible found in the Mormon book, and theory, are but as a drop in the bucket. May God help us that we may not “give heed to fables, and commandments of men, that turn from the truth.”

In my next, I shall examine the Doctrines of Moromonism.