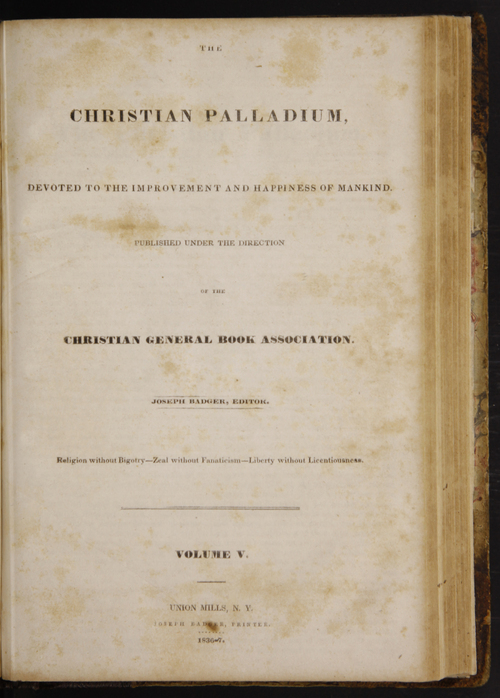 MR. EDITOR:—Within a few weeks past our city has been visited by a swarm of these deluded beings, who are going to and fro. (in imitation of their father) and up and down the earth, seeking whom they may lead astray from the truth as it is in Jesus, to the fabrications of lies by Sidney Rigdon, Joe Smith, & Co.

I took the opportunity to attend one of their meetings, at the request of several friends, in order to question the gentlemen on the authenticity of the Book of Mormon, their views, customs, &c.

Mr. Sidney Rigdon, (who no doubt, the author and contriver of the book,) was the speaker for the evening. His discourse was founded upon the confession of Peter: Matt. xvi. 13–

18. After a lengthy exordium, he attempted to show that notwithstanding Christ had wrought many miracles, and done man mighty works, yet they did not prove to the people that he was the Messiah “ the son of God.” No person, therefore, knew that Jesus was the son of God, till it was revealed unto Peter. The fact was only obtained by a direct revelation to Peter, at this moment when he made the confession to Christ. All that was known from his miracles, was that he was “Jeremiah, or one of the Prophets.”

HIS SECOND OBJECT.—As the Mormons abound in revelations, the main object with them is to show that Christianity was founded on the doctrine of direct and personal revelations to every man. When once this is established in the mind of a professed Christian, then they appeal to this principle, and demand faith in Mormonism on the same ground of Christianity. Thus Mr. Rigdon taught, “Blessed art thou Simon Barjona ( because thou hast got a revelation. ) flesh and blood have not revealed this unto thee but my father who is in heaven. Now says Mr. R. This is the rock on which Christ [243] has built his church. Here the church commenced. Blessed art thou, Simon Barjona, because thou hast got a revelation, and on this rock, (viz: this doctrine of direct, personal revelations, to all who believe and embrace the Christian religion, by which they shall know its truth, independently of other evidences) On this rock, he said Christ had built the church. Moreover, he had given the keys of the kingdom to Peter; i.e. he had given him the power of obtaining revelations from heaven at any time. So that “what he bound on earth was bound in heaven.” Every disciple of Mormonism is instructed to believe that he shall be favored as above with direct and personal revelations from God, of the truth of the things reported by Rigdon, Smith & Co. When a person will take this ground, he may become in the same hour, almost any thing else within the region of fanaticism, and wild enthusiasm.

THE EXAMINATION.—When Mr. R. had finished his discourse, I begged the privilege of asking a few questions. It being granted I proceeded to ask: 1. Did I understand you to say, sir, that no person on earth ever knew that Jesus Christ was the Son of God, till it was revealed to Peter in Ceserea Phillipi, as recorded in the text.

Ans. (Mr. Rigdon.) Yes, I did say so, and refer you to the text in proof of the assertion.

2. How does it happen, then, sir, that at his baptism, two years before this, that a voice from heaven proclaimed him to be the Son of God, to the multitude that had assembled at the Jordan to be baptised of John. And how is it that John “saw and bare record at this time, that this is the Son of God.” (Some confusion, no satisfactory answer.) 3. Did you say, sir, that miracles were no proof of Jesus being the son of God?

4. How can this be, when in the 11th ch. of Mat. 3–6 verses, Christ referred John the Baptist to his miracles, in direct proof of his being the true Mesiah. I need not say that the mormon gentleman was confounded, though he attempted to extricate himself by his sophistry, in which he abounds, yet it only made a bad matter worse. He knew what he had stated was false.

His object was to deceive and lead astray the innocent disciples of Christ. He, however, did not make many disciples on this occasion.

If the heralds of the cross would only meet these deceivers promptly, they would save their flocks from the disastrous influences of this delusion.