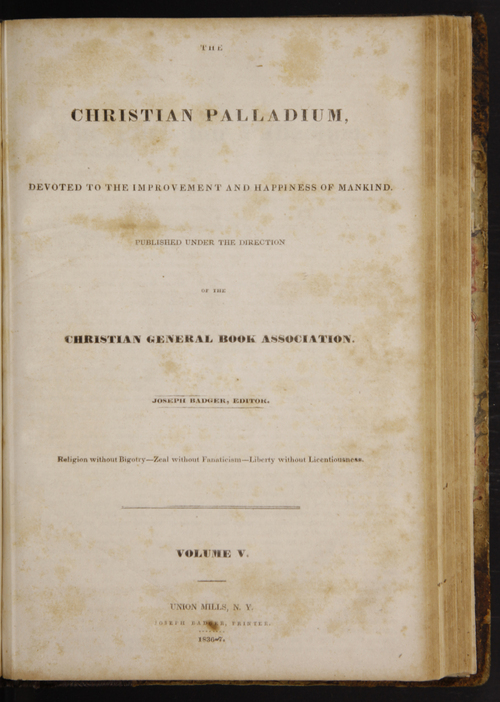 In this day so prolific of religious theories, controversy, intolerance and proscription, how natural, and how important the question, “what is truth? ” and how satisfactory and consoling to the Christian, is the answer of our Savior to his Father, and our Father, “Thy word is truth. ”

Among other theories of modern times, “Mormonism” assumes a conspicuous place, and claims the attention of the world, which for a variety of reasons I wish to notice.

1. It unchristianizes the whole world, both Catholic and Protestant; denying that there has been either Gospel, or gospel Ministers in the world for more than fifteen centuries, until they were revived in the state of NEW YORK in 1824.

2. They profess to be the only true Church, alone possessing the Gospel and its Ministry.

3. They present the Mormon Book as divine revelation, and of equal authority with the BIBLE

4. A Brother of mine, who is among them, commenced a correspondence with me on the subject, when I gave a prompt reply, promising him, if he, or any of that people, could, and would answer my honest objections to the Mormon theory, I would be a MORMON. Mr. Sidney Rigdon a high priest of that profession proffered his services, and commenced the work by a lengthy reply to my letter to my brother, which he concludes by saying, “I submit it to your inspection, desiring that you would reply as fully as the case requires.” Then without giving me notice of his design, or an opportunity to prepare mine for the press, published mine, to my Brother, and his reply in their paper, called, “LATTER DAY SAINTS’ MESSENGER and ADVOCATE.” In examining his letter, I found the four following prominent points of difference.

1. “Relative to the design of revelation.”

2. To the design of miracles.

4. “Relative to the necessity of revelation and Miracles at the present day.”

To all those particulars I replied fully.— I assumed that the design of revelation was

1. To make known the being of God.

3. The consequences of doing, or not doing his will.

I argued that the great design of miracles was, to attest the divine mission of those, whom God authorized to bear his messages to mankind. In support of this position I gave him Ex. iv. 1, 2, 3, 4, 5, 8, 39, &c. also Ex. xix. 9, 2. Kings xx. 9, 11. Here and in numerous places we find the avowed object of miracles to be to confirm the testimony of God’s messengers, and while the miracles of some of the Prophets are recorded, I think we have no just reason to suppose that they did not all work miracles for the same purpose.

Elijah was answered in his request, when he prayed that it might not rain—again when he prayed for rain. He continued, the oil and meal of the widow of Zarephath. He raised the widow’s son—brought down fire on the fifties—fire to consume the sacrifice—the wood—the water, and the alter; that the people might know that the Lord was God—and he his prophet. Elisha caused iron to swim—raised a dead child, and cleansed a leaper; and from attending circumstances, there is no doubt but the prophets were all in the habit of working miracles. The captive maid said, she would to God NAMAN was with the prophet of Israel, for he would heal him. When Naman came to the King of Israel to be healed, Elisha said, “send him to me, and he shall know there is a prophet in Israel.” Thus plainly intimating that a prophet was known by his miracles.

Christ says “if I do not the works of my father believe me not.” —again, “believe me for the very works sake.” The Apostles went out preaching God also, hearing them witness, both with signs and wonders, and divers MIRACLES.

Mr. Rigdon declared that “the doctrine preached by Christ and the Apostles had disappeared,” which Gospel he considers to be that power by which miracles are wrought—the sick healed—and the holy spirit confered, by laying on of hands, &c. I assumed that the Gospel is the glad tidings of a Savior, and of salvation to all nations.

Gal. iii. 8. This Gospel is called “the word of truth” Eph. i.13. Where Christ says “go ye into all the world and preach the Gospel”—he means the same as “preach the word.”

“The word which God sent by Jesus Christ.” This word is called the New Testament, or Gospel, and is written in the Bible. This is the Gospel Paul preached, which “he received by revelations of Jesus Christ”—which “when ye read, ye may understand.” If this be the Gospel, every man that has got a Bible has got the Gospel—hence the Gospel has not disappeared. The argument that the Gos- [227] pel is power, does not prove that the word is not the Gospel. The word of God is quick and powerful.” “The scriptures are able to make you wise unto salvation through faith.” But “the word did not profit when not mixed with faith.” “The word of God which effectually worketh in you that believe.”

Thus it is seen that the Gospel (or word) is “the power of God unto salvation to all who believe.” If we have got the Gospel where is the need of a further revelation? We do not want another Gospel. If in the Apostles’ days, the Gospel was able to save sinners, it is now. If it was then a sufficient rule of life, it is now. If the primitive disciples needed no more to make them wise unto salvation, neither do we. We have got the whole Gospel, why do we need more revelation? surely we do not. And if miracles were to attest revelation, we need no more miracles, and this is the reason why we do not have them.

Mr. Rigdon published the letter above alluded to and replied in a foreign and ungentlemanly manner, then closed his columns against me. Thus thrusting me into their paper without my consent, and then out again at his own pleasure, not allowing me to speak for myself. The following is a specimen of his reply, and of the spirit of Mormonism:

When he saw that I was not caught by his sophistry, he says—“I warn you in the name of Jesus Christ, and by virtue of the Holy Priesthood confered on me by the revelation of Jesus Christ, to repent of your sins, and be baptised for the remission of them, and receive the Holy spirit by the laying on of hands of those who are ordained in these last days unto that power, or you shall be damned; for your great ignorance of the things of God, clearly manifest that you are in the gall of bitterness and bond of iniquity, and an entire stranger to the Gospel of Christ: having a form Godliness, but denying the power thereof, from such my master commands me to turn away, as I do from you; believing that if I were to indulge you in writing any more to be published in the papers in this place, (KIRTLAND,) I should offend the readers thereof.” This is a much easier way to dispose of arguments than to refute them by plain testimony and logical reasoning.

5. They are drawing many into this awful vortex—this strongest of delusions. The consequences of which I cannot here mention.

Lastly, they have reported far and wide, that I have already become a Mormon, and that to the great grief of some of my dear friends and brethren, and in various instances have used this false report, as a bate, to catch others, with whom they supposed I had influence.

I have candidly examined the MORMON BOOK and theory. And now Mr. Editor, if you and your council shall consider the subject sufficiently interesting to your readers, and as calculated to add any thing to the “Improvement or Happiness of mankind,” I will give you a few Nos. by way of “Expose” to that system.