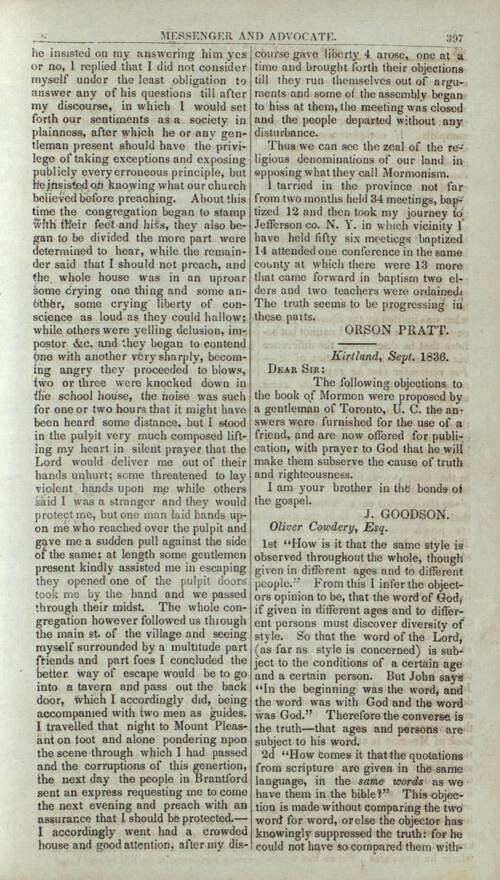 The following objections to the book of Mormon were proposed by a gentleman of Toronto, U.C. the answers were furnished for the use of a friend, and are now offered for publication, with prayer to God that he will make them subserve the cause of truth and righteousness.

I am your brother in the bonds of the gospel.

So that the word of the Lord, (as far as style is concerned) is subject to the conditions of a certain age and a certain person. But John says “In the beginning was the word, and the word was with God and the word was God.” Therefore the converse is the truth— that ages and persons are subject to his word.

2d “How comes it that the quotations from scripture are given in the same language, in the same words as we have them in the bible?” This objection is made without comparing the two word for word, or else the objector has knowingly suppressed the truth: for he could not have so compared them with- [397] out discovering, not merely that words are occasionally expunged, but that words sentences and sometimes whole verses are introduced which beautify the style, and render the sense full and complete. If completeness of sense, and perspicuity of style, pertain to good writing, the querist shall see those advantages enjoyed by the book of Mormon, by comparing the sixth chapt. of the first book of Nephi with the 48th and 49th of Isaiah. The added sentences and verses found in the book of Mormon were surely indited by the Spirit which indited the whole: they are equally beautiful and sublime: and the querist thought so to when he read them, if not, I must conclude that he was unable to discern, between what was indited by the Spirit of prophecy & what is not. For I cannot but believe that he discovered the difference but forbore making mention of it.— For remember that he says the quotations from scripture are in the same words

3d “Is it not rather singular that these scriptures going through the channels of the Hebrew and Greek languages into the coptic or Egyptian, should finally appear in our own tongue in the exact words of our own translators of the scriptures?” In another place the objector says (without proof) that up to the time of Lehi the prophets prophesied in Hebrew only.—

Therefore he contradicts himself by saying that the scriptures came through the channels of the Hebrew and Greek. History supports this view, referring the first translation of the Pentateuch into Greek to about 285 years before Christ.

4th “There are several words used as taken from this reformed Egyptian prophecy, which are no more Egyptian than Chippewa, for instance the words Jesus and Christ.” I may now safely denounce this objector, ignorant presumptuous and incompetent to handle the matter he has undertaken. The book of Mormon is an English translation of a prophecy delivered in reformed Egyptian, and this sapient critic wishes to know why it should contain words which are not Egyptian: or words which are current in the English language. Is it not the duty of a translator to use those words which are best understood by the people for whom he translates So as the words are understood, it matters not the least their etymology. Take notice that this querist objects to an English translation of an Egyptian writing, because it contains words which are not Egyptian. o according to him, a translation from reformed Egyptian should consist of reformed Egyptian words: and on the same principle a translation from Greek should consist of Greek words, a translation from French of French words: in short there could be no such thing as a translation. The Hebrew word “Jehoshua” or “Joshua” when translated into Greek is “Jesus,” both words sgnifying “He who shall save.” The Hebrew word “Messiah” when translated into Greek is “Christ” both words signifying “Annointed of God.” Lactantius an ancient author observes “Christ is not a proper name, but denotes power: for the Jews used to give this appellation to their kings, calling them Christ or annointed by reason of their sacred unction.”

The words Jesus and Christ therefore are radically neither English nor Greek, for both have Hebrew roots.

6th “Why was not Lehi’s prophecy referred to by our Savior or the evangelists, as being fulfilled in different incidents of his life, seeing the prophecy was so very clear, that there could have been no mistake about it.” Lehi prophesied of no incidents in the life of our Savior; at least none are recorded in the book of Mormon. Therefore O Querist, dont be surprised that prophecies are not referred to, which for any thing we know were never recorded. — Supposing that Lehi had prophesied of certain incidents in the life of our Lord, [398] it would not be safe to reject him as a false prophet because the new testament writers have not referred to him: they do not refer to Isaiah’s prophecy concerning the rich man’s making the tomb, but merely record the event which fulfills the prophecy.

“It does not appear to me that the Church is in need of a revelation of the above stamp.”

This man turns away from the only church upon earth which was founded upon and is governed by revelation (the rock upon which Christ said he would found it) and says she has no need of it.

But perhaps he means that the church which is not founded upon that rock has no need of it, in which I concur. For the Mother of harlots with all her daughters of harlotry, will never obtain revelations, though they will obtain power of the Devil to work miracles. Here the objector turns a certain writing revelation, and says the church has no need of it. Forbear to call it revelation, or speak out and say, that God has revealed what the church does not want. The words “of the above stamp” are surely excessively stupid when applied to a revelation. The whole of these objections I consider an imbecile display of self-sufficiency. The Book of Mormon was translated by the gift and power of God, and that is the full and complete answer to all the objections against the style. And it is strong proof of this, that its style is entirely dissimilar to that of any other book. The only book that bears any resemblance is the Bible: but the simplicity of the Book of Mormon far exceeds that. Every person who has cultivated in writing, knows that true simplicity is of the most difficult attainment. Those authors who are remarkable for sublimity are also remarkable for simplicity. In the Book of Mormon we find such great subject as atonement justice good and evil. Resurection et cetora treated with childlike simplicity. The most educated man in existence, is incapable of writing a single page like that book. Talk no more about delusion.