Origin of the Mormon Bible 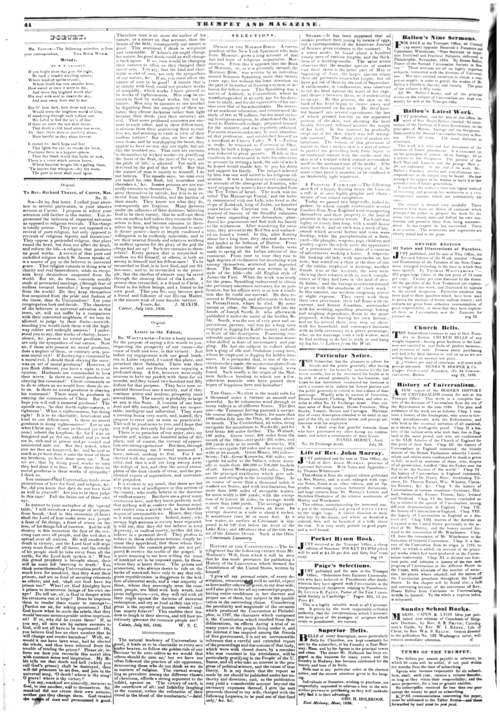 ORIGIN OF THE MORMON BIBLE. A correspondent of the New York Spectator who hails from Missouri, gives a long account of that last and least of religious impostures, Mormonism.

From this it appears that the Book of Mormon, or, as it is generally termed, the Mormon Bible, was written by an individual named Solomon Spaulding, more than twenty years ago, but without the least intention on the part of its author of framing a system of delusion for fellow men. This Spaulding was a native of Ashford, in Connecticut, where he was distinguished at an early age for his devotion to study, and for the superiority of his success over that of his schoolmates. He received an academic education, and commenced the study of law at Windham; but his mind inclining to religious subjects, he abandoned the law, went to Dartmouth college, prepared himself for the ministry, and was regularly ordained. For some reasons unknown, he soon abandoned that profession, and established himself as a merchant at Cherry Valley, N. Y.—

Failing in trade, he removed to Conneaut in Ohio, where he built a forge—but again failed, and was reduced to great poverty. While in this condition he endeavored to turn his education to account by writing a book, the sale of which he hoped would enable him to pay his debts and support his family. The subject selected by him was one well suited to his religious education. It was a historical novel containing an account of the aborigines of America, who were suppose by some to have descended from the Ten Tribes of Israel. The work was entitled ‘The Manuscript Found,’ and the history commenced with one Lehi, who lived in the reign of Zedekiah, king of Judea, six hundred years before the Christian era. Lehi, being warned of heaven of the dreadful calamites that were impending over Jerusalem, abandoned his possessions and fled with his family to the wilderness. After wandering for some time, they arrived at the Red Sea and embarked on board a vessel. In this, after floating about for a long time, they reached America, and landed at the Isthmus of Darien. From the different branches of this family were made to spring all the Indian nations of this continent. From time to time they rose to high degrees of civilization but desolating wars among themselves, scattered and degraded them. The Manuscript was written in the style of the bible—the old English style of James the First. When the work was ready for the press, Spaulding endeavored to obtain the pecuniary assistance necessary for its publication, but his affairs were in so low a condition that he could not succeed. He then removed to Pittsburgh, and afterwards to Amity in Pennsylvania, where he died. By some means or other, the Manuscript fell into the hands of Joseph Smith, Jr. who afterwards published it under the name of the Golden Bible. Smith, was the son of very poor and superstitious parents, and was for a long time engaged in digging for Kidd’s money, and other feats of like description.

Possessing considerable native shrewdness, he became somewhat skilled in feats of necromancy and juggling. He had the address to collect about him a gang of idle and credulous young men, whom he employed in digging for hidden treasures. It is pretended that, in one of the excavations they made, the mysterious plates from which the Golden Bible was copied, were found. Such briefly is the origin of the Mormon faith—a humbug to which not a few, otherwise sensible men have pinned their hopes of happiness here and hereafter!