Inspiration of the Scriptures 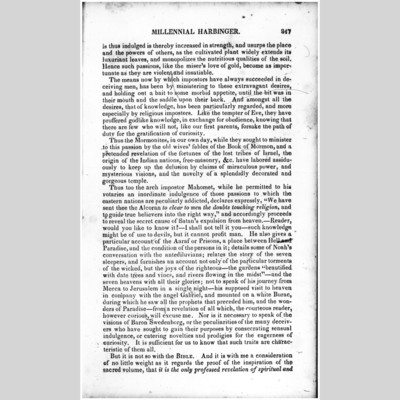 [. . .] The means now by which impostors have always succeeded in deceiving men, has been by ministering to these extravagant desires, and holding out a bait to some morbid appetite, until the bit was in their mouth and the saddle upon their back. And amongst all the desires, that of knowledge, has been particularly regarded, and more especially by religious impostors. Like the tempter of Eve, they have proffered godlike knowledge, in exchange for obedience, knowing that there are few who will not, like our first parents, forsake the path of duty for the gratification of curiosity.

Thus the Mormonites, in our own day, while they sought to minister to this passion by the old wives’ fables of the Book of Mormon, and a pretended revelation of the fortunes of the lost tribes of Israel, the origin of the Indian nations, free-masonry, &c. have labored assiduously to keep up the delusion by claims of miraculous power, and mysterious visions, and the novelty of a splendidly decorated and gorgeous temple.

Thus too the arch impostor Mahomet, while he permitted to his votaries an inordinate indulgence of these passions to which the eastern nations are peculiarly addicted, declares expressly, “We have sent thee the Alcoran to clear to men the doubts touching religion, and to guide true believers into the right way,” and accordingly proceeds to reveal the secret cause of Satan’s expulsion from heaven.—Reader, would you like to know it?—I shall not tell it you— such knowledge might be of use to devils, but it cannot profit man. He also gives a particular account of the Aaraf or Prisons, a place between Hell and Paradise, and the condition of the persons in it; details some of Noah’s conversation with the antediluvians; relates the story of the seven sleepers, and furnishes an account not only of the particular torments of the wicked, but the joys of the righteous—the gardens “beautified with date trees and vines, and rivers flowing in the midst”—and the seven heavens with all their glories; not to speak of his journey from Mecca to Jerusalem in a single night—his supposed visit to heaven in company with the angel Gabriel, and mounted on a white Burac, during which he saw all the prophets that preceded him, and the wonders of Paradise—from a revelation of all which, the courteous reader, however curious, will excuse me. Nor is it necessary to speak of the visions of Baron Swedenborg, or the peculiarities of the many deceivers who have sought to gain their purposes by consecrating sensual indulgence, or catering novelties and prodigies for the eagerness of curiosity. It is sufficient for us to know that such traits are characteristic of them all. [. . .]