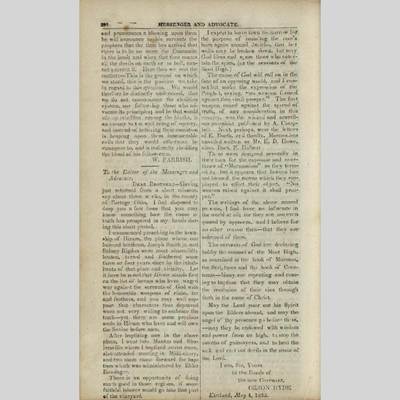 To the Editor of the Messenger and Advocate,

DEAR BROTHER:— Having just returned from a short mission, say about three weeks, in the county of Portage Ohio, I feel disposed to drop you a few lines that you may know something how the cause of truth has prospered in my hands during this short period.

I commenced preaching in the township of Hiram, the place where our beloved brethren, Joseph Smith jr. and Sidney Rigdon were most shamefully beaten, tarred and feathered some three or four years since by the inhabitants of that place and vicinity. Let it here be noted that Hiram stands first on the list of heroes who have waged war against the servants of God with the honorable weapons of clubs, tar and feathers, and you may well suppose that characters thus depraved were not very willing to embrace the truth— yet there are some precious souls in Hiram who have and will own the Savior before men.

After baptizing one in the above place, I went into Mantua and Shalersville where I baptized seven more, also attended meeting in Middlebury, and two more came forward for baptism which was administered by Elder Boosinger.

There is an opportunity of doing much good in those regions, if some faithful laborer would go into that part of the vineyard.

I expect to leave town to-morrow for the purpose of sounding the ram’s horn again around Jericho, that her walls may be broken down, but may God bless and spare those who entertain the spies, (or the servants of the Most High.)

The cause of God will roll on in the face of an opposing world, and I cannot but make the expression of the Prophet, saying, “no weapon formed against thee shall prosper.” The first weapon raised against the spread of truth, of any consideration in this country, was the wicked and scurrilous pamphlet published by A. Campbell. Next, perhaps, were the letters of E. Booth, and thirdly, Mormonism unveiled written by Mr. E. D. Howe, alias. Doct. P. Hulbert.

These were designed severally in their turn for the exposure and overthrow of io“Mormonism” as they termed it; but it appears that heaven has not blessed the means which they employed to effect their object, “No weapon raised against it shall prosper.”

The writings of the above named persons, I find have no influence in the world at all; for they are not even quoted by opposers, and I believe for no other reason than— that they are ashamed of them.

The servants of God are declaring boldly the counsel of the Most High, as contained in the book of Mormon, the Scriptures and the book of Covenants— Many are repenting and coming to baptism that they may obtain the remission of their sins through faith in the name of Christ.

May the Lord pour out his Spirit upon the Elders abroad, and may the angel of thy presence go before them,— may they be endowed with wisdom and power from on high, to stop the mouths of gainsayers, and to heal the sick, and cast out devils in the name of the Lord.

I am, Sir, Yours in the Bonds of the new Covenant,