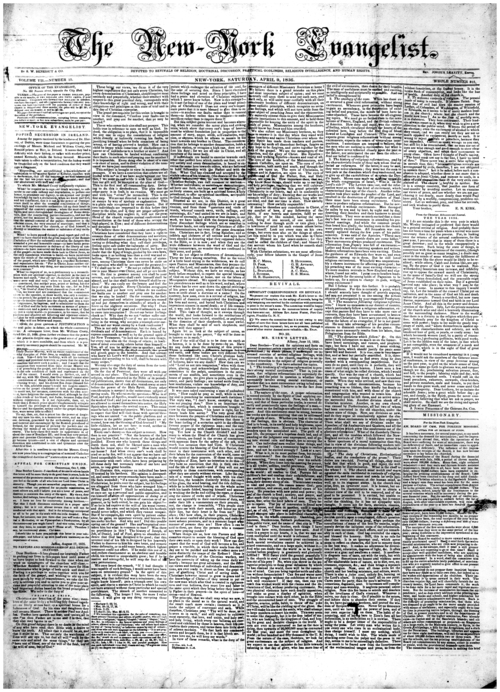 For the New-York Evangelist.

Bro. Leavitt—I have often wondered that so little is said or known of the Mormons, who are now making progress in this country. There certainly has not a more extraordinary religious sect sprung up since the time of the Mahomet. They are generally thought too contemptible even to be noticed. But I think this is a mistake. There are some striking features of resemblance between this imposture and that of Mahomet. Both admit the common Bible, but profess to have received a new revelation that entirely supercedes the old. Both owe their origin to a person in the lowest ranks of life, almost totally illiterate, with scraps of religion, and superstition, and mysticism about him, whom his followers regard as a Prophet of God that has direct intercourse with the Deity. Both prophets profess to receive from time to time direct revelations from heaven, by which they are governed, and govern their followers.

The Kirtland imposture has collected a considerable number of followers, not less, they say, than twenty thousand. I have just made a visit to the settlement at Kirtland, where about one thousand are located. There they have erected, and nearly completed, a huge stone temple at an expense of forty thousand dollars. Its dimensions are sixty by eighty feet, and fifty feet high. It is of no earthly order of architecture, but the Prophet says is exactly according to the pattern showed him, though it is by no means equal to that in splendor from the want of means. It appears to be of two stories, having two rows of gothic windows running round it, besides windows projecting from the roof for the attic story. The first floor is the place of worship, and is completed in a very showy style, with four rows of pulpits at each end, having three pulpits in a row. These 12 pulpits rise behind and above one another, and are designed, the uppermost row, asthey say, for the bishop and his counsellors; the second for the priest and his counsellors; the third for the teachers, and the fourth, or lowest, for the deacons. Each end is provided in the same manner. The body of the house is occupied with slips, but the seats in them are moveable, so that the audience can sit facing either end of the room.—Over the division between each of the rows of pulpits hangs a painted canvass, rolled up to the ceiling, and to be let down at pleasure, so as to conceal the dignitaries behind from the audience. Similar curtains, or as they are called, “veils,” are disposed of over the room, so that it can at any time be divided into four appartments, to carry on the objects of the imposture. Every thing about the temple is evidently designed to strike the senses and attract curiosity, and at the dedication, which is to take place next Sabbath, most astonishing “glories” are promised and expected by the faithful. The second floor, and the attic loft are designed for a seminary, literary and theologicall which is expected to have the manual labor system attached to it. The Mormons appear to be very eager to acquire education. Men, women and children lately attended school, and they are now employing Mr. Seixas, the Hebrew teacher, to instruct them in Hebrew; and about seventy men in middle life, from twenty to forty years of age, are most eagerly engaged in the study.—They pursue their studies alone until twelve o’clock at night, and attend to nothing else. Of course many make rapid progress. I noticed some fine looking and intelligent men among them. Some in dress and deportment have all the appearance of gentlemen, yet the majority are exceedingly ignorant.

They all profess a great deal of piety. And in this respect they equal the Mahometans themselves.

They abound in prayers and other acts of devotion. Many of them are converts from the Baptist and Methodist sects, but none, or next to none from the Presbyterian church; and aside from the delusion of Mormonism, they have the appearance of being devout Christians. They are by no means, as a class, men of weak minds. Perhaps most fanatics and visionaries have intellects peculiary though perversely active.

They all have revelations continually, though the prophet alone is authorized to commit them to writing, for fear, undoubtedly, of discrepancies. Besides the Mormon Bible, they already have a Book of Revelations. Every impulse is an immediate revelation, and they answer all difficulties and objections by asserting that they know that they have the truth, for it comes directly from heaven, and the objector is a poor blinded creature in the way to destruction.

There is one difference which ought to be mentioned between the relation of Joseph Smith, Jr. and that of Mohammed. The latter had, at least. the merit of a flowing and beautiful style. But there never was a more bald, senseless, drivelling, collection of trash, put together in the form of a book than the book of Mormon and the Supplementary Revelations. It is really astonishing, and it is humiliating to think that any human beings who have read the Bible can be so far deluded as to believe such a wretched farrago to be a divine revelation.

In proportion to the strength of their faith they have the power of working miracles, healing the sick, &c., of which they relate numberless instances, though no body attests them besides themselves. They have the gift of tongues, which is merely the capacity to scream in an unintelligible gibberish when they are highly excited. The more intelligent place but little reliance upon either miracles or prophecy, for the purpose of convincing unbelievers, as they have so often attempted both without success; but rely chiefly on their own internal experience.

What they know, of course they know, and there is an end of the matter.

That most of them sincerely believe in their mummeries cannot be denied. Some probably have attached themselves from other motives. Many are doubtless pious though deluded men. They furnish evidence of being, for the most part, men of perverted intellect, disordered piety, unfurnished minds, with no sound principles of religion, inclined to the mystical and dreamy, and ready to seize upon any thing, no matter how crazy or absurd, that will gratify their restless, crazy piety, and bolster up their exorbitant, spiritual pride. Snch men always exist in every community, and are always the fit subjects for fanaticism and delusion. They call themselves “latter day saints,” and profess to be the only true church, to have the only gospel order, consisting of apostles, elders, bishops, &c. &c., which several orders of the Christian hierarchy have been distinctly brought to light in the Book of Mormon. They believe that there is no true church without apostles, prophets, miracles, tongues, &c. as they existed in the apostles’ days, and to all which they lay very positive claims. They lay great stress upon the promise, “these signs shall follow those that believe,” &c.

The inquiry instinctively arises, are they really so blinded and deluded as would seem, or are they a set of imposters? With respect to the great mass, I have before said; that I believe they are no hypocrites, but genuine fanatics, completely blinded and deluded. But of the leaders I do not believe this is true.

I had the honor of making some acquaintance with the illustrious prophet, Jo Smith, and his coadjutor, Rigdon, and the other inferior satellites. Smith is apparently about thirty-five years of age, and is evidently a singular being. He is very plausible and polite in his manners, has an eye that glistens like a serpent’s, and it is perpetually flying about to find some object on which to rest. his lips are firmly compressed, and he wears an eternal smile of self-complacency on his features; and has all the air of one who is conscious of having communion with invisible spirits, whether good or bad you are at a loss to determine. He has been a money-digger and necromancer from his youth, and his father before him. His character is undoubtedly about an equal compound of the imposter and the fanatic, and combines all the features of the knave and the dupe.

Rigdon is altogether another sort of man. He has been a Campbellite preacher, of considerable talents and eloquence. He is a large, fat, jolly fellow, who knows how to turn his talents to the best account, and manifestly has not a particle of faith in the imposture, but practices it for purposes which he knows best. He was evidently, as I talked with him, ashamed of the silly fooleries that he was propagating, and took the earliest opportunity to make an excuse and leave the company. What an account such men will have to render to God in the day of retribution!

The rise and progress of this extraordinary delusion, shows religious teachers the importance of having sound instruction imparted along with high excitement, that men may have some other evidence on which their faith rests than the impulses of their own unstable minds.

And the fact that scarcely a convert has been made from Presbyterian ranks, (a fact which the fanatics ascribe to their pride) is certainly highly creditable to that denomination.