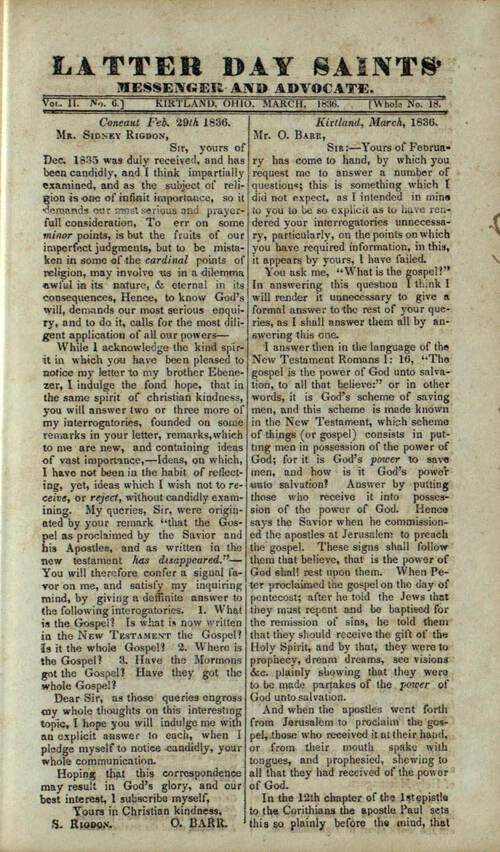 SIR:— Yours of February has come to hand, by which you request me to answer a number of questions; this is something which I did not expect, as I intended in mine to you to be so explicit as to have rendered your interrogatories unnecessary, particularly, on the points on which you have required information, in this, it appears by yours, I have failed.

You ask me, “What is the gospel?” In answering this question I think I will render it unnecessary to give a formal answer to the rest of your queries, as I shall answer them all by answering this one.

I answer then in the language of the New Testament Romans 1:16, “The gospel is the power of God unto salvation, to all that believe:” or in other words, it is God’s scheme of saving men, and this scheme is made known in the New Testament, which scheme of things (or gospel) consists in putting men in possession of the power of God; for it is God’s power to save men, and how is it God’s power unto salvation? Answer by putting those who receive it into possession of the power of God. Hence says the Savior when he commissioned the apostles at Jerusalem to preach the gospel. These signs shall follow them that believe, that is the power of God shall rest upon them. When Peter proclaimed the gospel on the day of pentecost; after he told the Jews that they must repent and be baptised for the remission of sins, he told them that they should receive the gift of the Holy Spirit, and by that, they were to prophecy, dream dreams, see visions &c. plainly showing that they were to be made partakes of the power of God unto salvation.

And when the apostles went forth from Jerusalem to proclaim the gospel, those who received it at their hand, or from their mouth spake with tongues, and prophesied, shewing to all that they had received of the power of God.

In the 12th chapter of the 1st epistle to the Corithians the apostle Paul sets this so plainly before the mind, that [273] none need mistake, he says in the 28th verse “And God hath set some in the church, first apostles, secondly prophets, thirdly teachers; after that miracles, then gifts of healings, helps, governments, diversities of tongues.”

Such then was the way by which God administered his power to the children of men as set forth in the New Testament, and such was the gospel proclaimed by those commissioned by the Savior himself, and this, and this only is the order of things set forth in the New Testament. When I say that this order of things has disappeared from among men, I say no more than you and all the protestant world says also; and if this is not the gospel order? pray what is it? and if it is the gospel order, you agree with me that is has disappeared.

You ask if we have the gospel, and where is the gospel?

I answer that the power of administering in the name of the Lord Jesus to men through which they were made partakers of the power of God, was never enjoyed by any of the human family but by the revelation of Jesus Christ as Paul got it, if we have got the gospel that is the way we have got it, and this power we profess to have, and we obtained it by the ministering of Holy Messengers.

Thus I have answered your queries in as few words as possible in order to cut the work short in righteousness.

I shall await your reply to my whole communication, hoping I shall not have to wait long.

Believe me, Yours in the best of feelings,