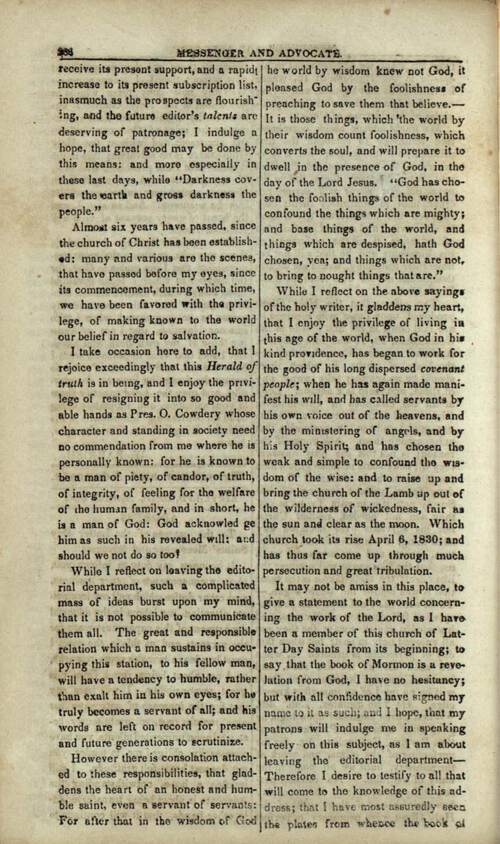 I take occasion here to add, that I rejoice exceedingly that this Herald of truth is in being, and I enjoy the privilege of resigning it into so good and able hands as Pres. O. Cowdery whose character and standing in society need no commendation from me where he is personally known: for he is known to be a man of piety, of candor, of truth, of integrity, of feeling for the welfare of the human family, and in short, he is a man of God: God acknowled ge him as such in his revealed will: and should we not do so too?

While I reflect on leaving the editorial department, such a complicated mass of ideas burst upon my mind, that it is not possible to communicate them all. The great and responsible relation which a man sustains in occupying this station, to his fellow man, will have a tendency to humble, rather than exalt him in his own eyes; for he truly becomes a servant of all; and his words are left on record for present and future generations to scrutinize.

However there is consolation attached to these responsibilities, that gladdens the heart of an honest and humble saint, even a servant of servants: For after that in the wisdom of God he world by wisdom knew not God, it pleased God by the foolishness of preaching to save them that believe.— It is those things, which the world by their wisdom count foolishness, which converts the soul, and will prepare it to dwell in the presence of God, in the day of the Lord Jesus. “God has chosen the foolish things of the world to confound the things which are mighty; and base things of the world, and things which are despised, hath God chosen, yea; and things which are not, to bring to nought things that are.”

While I reflect on the above sayings of the holy writer, it gladdens my heart, that I enjoy the privilege of living in this age of the world, when God in his kind providence, has began to work for the good of his long dispersed covenant people; when he has again made manifest his will, and has called servants by his own voice out of the heavens, and by the ministering of angels, and by his Holy Spirit; and has chosen the weak and simple to confound the wisdom of the wise: and to raise up and bring the church of the Lamb up out of the wilderness of wickedness, fair as the sun and clear as the moon. Which church took its rise April 6, 1830; and has thus far come up through much persecution and great tribulation.

It may not be amiss in this place, to give a statement to the world concerning the work of the Lord, as I have been a member of this church of Latter Day Saints from its beginning; to say that the book of [286] Mormon is a revelation from God, I have no hesitancy; but with all confidence have signed my named to it as such; and I hope, that my patrons will indulge me in speaking freely on this subject, as I am about leaving the editorial department— Therefore I desire to testify to all that will come to the knowledge of this address; that I have most assuredly seen the plates from whence the book of Mormon is translated, and that I have handled these plates, and know of a surety that Joseph Smith, jr. has translated the book of Mormon by the gift and power of God, and in this thing the wisdom of the wise most assuredly has perished: therefore, know ye, O ye inhabitants of the earth, wherever this address may come, that I have in this thing freed my garments of your blood, whether you believe or disbelieve the statements of your unworthy friend and well-wisher.

It is no trifling matter to sport with the souls of men, and make merchandise of them; I can say, with a clear conscience before God and man, that I have sought no man’s goods, houses or lands, gold or silver; but had in view for my chief object, the welfare of the children of men, because I know that I have been called of God, to assist in bringing forth his work in these last days, and to help to establish it, that as many souls as would believe, and obey the truth, might be saved in his kingdom; and also assist in bringing about the restoration of the house of Israel, that they might magnify his name, for what he has done and is doing for the fulfilment of the prophecies of all the holy prophets that have written on this great and important subject, since the days of Adam, to this present time: and while I have been in the editorial department, I have endeavored to write, obtain and select such matter as was calculated to promote the cause of God, as far as my judgment was capable of discerning: and wherein I may have erred, I am conscientious and innocent; but do cheerfully and humbly ask pardon of those whose feelings in any wise I may have injured; by digressing in the least, from the strictest path of rectitude.

I would do injustice to my own feelings, if I did not here notice, still further the work of the Lord in these last days: The revelations and commandments given to us, are, in my estimation, equally true with the book of Mormon, and equally necessary for salvation, it is necessary to live by every word that proceedeth from the mouth of God: and I know that the Bible, book of Mormon and book of Doctrine and Covenants of the church of Christ of Latter Day Saints, contain the revealed will of heaven. I further know that God will continue to reveal himself to his church and people, until he has gathered his elect into his fold, and prepared them to dwell in his presence.

Men at times depend upon the say of others, and are influenced by their persuasions to embrace different systems. This is correct, inasmuch as the principle is a just one: God always commissioned certain men, to proclaim his precepts to the remainder of the generation in which they lived; and if they heeded not their sayings, they were under condemnation.

Though weak may have been my arguments and feeble my exertions, to persuade others to believe as myself, the few months I have labored in this department, I trust, I have been the means of doing some good to my fellow men. If I were not sensible that I have been doing the will of my heavenly Father, I should regret, that I had ever suffered my name to become public; I could not endure the idea of having been the means of persuading men to detract from truth, and embrace error: it has been a principle in my heart to embrace truth, and reject error; and I trust it will remain in my heart forever.

I feel it my duty to say, to the Elders who have been laboring in the cause of our blessed Reedeemer, and have taken the trouble, to procure subscribers for the Messenger and Advocate, they have my sincere thanks, [287] and shall ever occupy a conspicuous portion of my gratitude.

There are others who have been somewhat negligent in this thing, which is owing perhaps, in part, for want of proper instruction upon this point; not realizing that this periodical is opening and preparing many places, for such as are travelling to proclaim the gospel of our blessed Redeemer; whereas, if it had not been for this means, would have been closed and impenitrable. I desire therefore, that the Elders of the church of Latter Day Saints will avail themselves of every opportunity that presents itself of procuring subscribers for this paper, not for pecuniary interests, but for the welfare of the children of men. I hope that the Elders will do all the good in their power, as this is a day of “Warning and not of many words.” Therefore, I trust you will have the spirit of God in your hearts to guide you into all truth, until the knowledge of God shall cover the earth as the waters cover the great deep, and the saints of God are gathered together, and Zion becomes the joy of the whole earth.