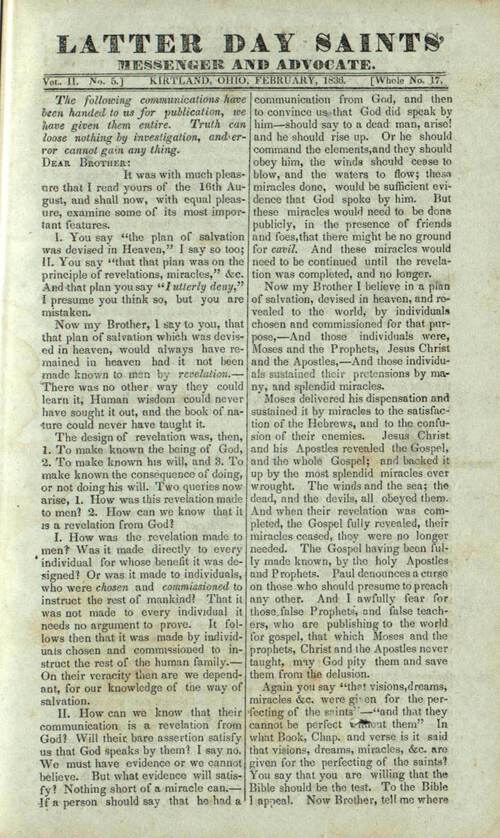 The following communications have been handed to us for publication, we have given them entire. Truth can loose nothing by investigation, and error cannot gain any thing.

It was with much pleasure that I read yours of the 16th August, and shall now, with equal pleasure, examine some of its most important features.

I. You say “the plan of salvation was devised in Heaven,” I say so too; II. You say “that that plan was on the principle of revelations, miracles,” &c. And that plan you say “I utterly deny,” I presume you think so, but you are mistaken.

Now my Brother, I say to you, that that plan of salvation which was devised in heaven, would always have remained in heaven had it not been made known to men by revelation.—There was no other way they could learn it, Human wisdom could never have sought it out, and the book of nature could never had taught it.

I. How was the revelation made to men? Was it made directly to every individual for whose benefit it was designed? Or was it made to individuals, who were chosen and commissioned to instruct the rest of mankind? That it was not made to every individual it needs no argument to prove. It follows then that it was made by individuals chosen and commissioned to instruct the rest of the human family.—On their veracity then are we dependant, for our knowledge of the way of salvation.

II. How can we know that their communication is a revelation from God? Will their bare assertion satisfy us that God speaks by them? I say no. We must have evidence or we cannot believe. But what evidence will satisfy? Nothing short of a miracle can.—If a person should say that he had a communication from God, and then to convince us that God did speak by him—should say to a dead man, arise! and he should rise up. Or he should command the elements, and they should obey him, the winds should cease to blow, and the waters to flow; these miracles done, would be sufficient evidence that God spoke by him. But these miracles would need to be done publicly, in the presence of friends and foes, that there might be no ground for cavil. And these miracles would need to be continued until the revelation was completed, and no longer.

Now my Brother I believe in a plan of salvation, devised in heaven, and revealed to the world, by individuals chosen and commissioned for that purpose.―And those individuals were, Moses and the Prophets, Jesus Christ and the Apostles,—And those individuals sustained their pretensions by many, and splendid miracles.

Moses delivered his dispensation and sustained it by miracles to the satisfaction of the Hebrews, and to the confusion of their enemies. Jesus Christ and his Apostles revealed the Gospel, and the whole Gospel; and backed it up by the most splendid miracles ever wrought. The winds and the sea; the dead, and the devils, all obeyed them.

And when their revelation was completed, the Gospel fully revealed, their miracles ceased, they were no longer needed. The Gospel having been fully made known, by the holy Apostles and Prophets. Paul denounces a curse on those who should presume to preach any other. And I awfully fear for those false Prophets, and false teachers, who are publishing to the world for gospel, that which Moses and the prophets, Christ and the Apostles never taught, may God pity them and save them from the delusion.

1. Did not Jesus Christ, and his Apostles deliver the Gospel, and the whole Gospel to the world? 2. And did they not receive it by revelation from God? 3. Were not the miracles they wrought, expressly to convince the world, that they were divinely authorised teachers, and that what they taught was from God? 4. And were not the miracles which they wrought, abundantly sufficient to confirm that fact that, God spoke by them? 1. If they delivered the whole Gospel. What more is there to be revealed—Or what reasons have we to expect more revelations? 2. And if no New revelation is to be made, Why should miracles be continued? Now my Brother I am candid in these queries, and that you may know where I am, I say to you, that I answer the first four queries all in the affirmation, and in reference to the last two, I say, I have no reason to expect any more revelation, consequently no more miracles. These are my honest convictions, after much prayerful investigation of the subject.

Now, so sure as that I have answered the first four questions correctly, so sure, we find the whole Gospel in the writings of the Apostles and evangelists,—And if we find the whole there, any after revelation, can be no part of the Gospel, because a whole can receive no additions to it of the same.—The whole Constitution of the United States was given, at the organization of the General Government,—Hence it admits of no after additions. So the whole Gospel was given in the days of the Apostles, and it admits of no additions, or diminution. Hence, when a man teaches the same that Christ and the apostles taught, he reveals nothing, he only publishes that which was before revealed, and if he teaches any thing which they did not, he teaches no part of the Gospel of Christ, for that was all taught before. It must be then, “another Gospel,” And any who presume to teach another has reason to fear Paul’s curse.

Now my Brother, I wish you and some of the wisest of your Mormon teachers to make out my errors, and teach me a better way if you can. I wish you, and them also, to give a candid answer to my queries. Come now, do not shun a fair investigation, truth will suffer nothing by it. You think I am in error,—That I am not in the kingdom of God,—And that I must come into that new work in order to be saved. Now Brother, if I am wrong I am worth righting, and I am willing to be righted. If I am not safe, I am worth saving, and willing to be saved. And I think that you are deceived, and many others, and I want a chance to show you wherein.—And I am willing to spend some time, and some paper and ink to do it, whether I succeed, or not. And on my part I say, if you, or any of your people can, and will answer my honest objections to your theory, I shall be a Mormon.

I am as ever, Your Affectionate Brother,