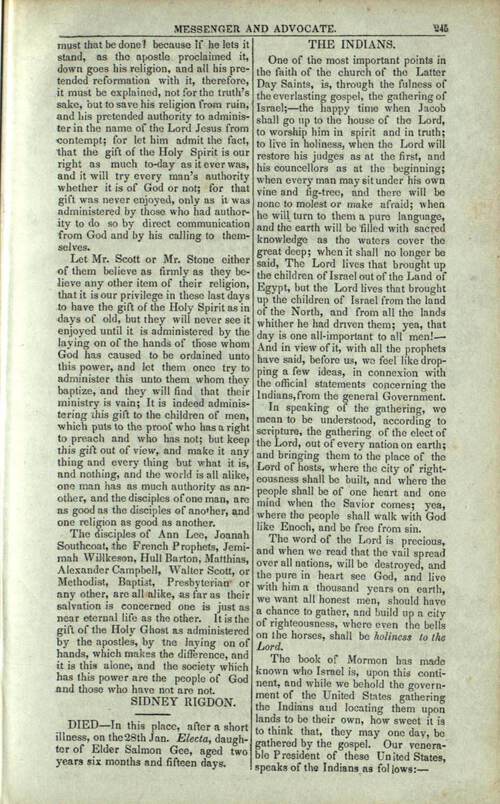 One of the most important points in the faith of the church of the Latter Day Saints, is, through the fulness of the everlasting gospel, the gathering of Israel;—the happy time when Jacob shall go up to the house of the Lord, to worship him in spirit and in truth; to live in holiness, when the Lord will restore his judges as at the first, and his councellors as at the beginning; when every man may sit under his own vine and fig-tree, and there will be none to molest or make afraid; when he will turn to them a pure language, and the earth will be filled with sacred knowledge as the waters cover the great deep; when it shall no longer be said, The Lord lives that brought up the children of Israel out of the Land of Egypt, but the Lord lives that brought up the children of Israel from the land of the North, and from all the lands whither he had driven them; yea, that day is one all-important to all men!—And in view of it, with all the prophets have said, before us, we feel like dropping a few ideas, in connexion with the official statements concerning the Indians, from the general Government.

The word of the Lord is precious, and when we read that the vail spread over all nations, will be destroyed, and the pure in heart see God, and live with him a thousand years on earth, we want all honest men, should have a chance to gather, and build up a city of righteousness, where even the bells on the horses, shall be holiness to the Lord.

The book of Mormon has made known who Israel is, upon this continent, and while we behold the government of the United States gathering the Indians and locating them upon lands to be their own, how sweet it is to think that, they may one day, be gathered by the gospel. Our venerable President of these United States, speaks of the Indians as follows:— [245]

“The plan of removing the Aboriginal People who yet remain within the settled portions of the United States, to the country west of the Mississippi river, approaches its consummation. It was adopted on the most mature consideration of the condition of this race, and ought to be persisted in till the object is accomplished, and prosecuted with as much vigor as a just regard to their circumstances will permit, and as fast as their consent can be obtained. All preceeding experiments for the improvement of the Indians have failed. It seems now to be an established fact, that they cannot live in contact with a civilized community and prosper. Ages of fruitless endeavors have, at length, brought us to a knowledge of this principle of intercommunication with them. The past we cannot recall, but the future we can provide for. Independently of the treaty stipulations into which we have entered with the various tribes, for the usufructuary rights they have ceded to us, no one can doubt the moral duty of the Government of the United States to protect, and if possible, to preserve and perpetuate, the scattered remnants of this race, which are left within our borders. In the discharge of this duty, an extensive region in the West has been assigned for their permanent residence. It has been divided into districts, and allotted among them. Many have already removed, and others are preparing to go; and with the exception of two small bands, living in Ohio and Indiana, not exceeding fifteen hundred persons, and of the Cherokees, all the tribes on the east side of the Mississippi, and extending from Lake Michigan 1 to Florida, have entered into engagements which will lead to their transplantation.

The plan for their removal and re-establishment is founded upon the knowledge we have gained of their character and habits, and has been dictated by a spirit of enlarged liberality. A territory exceeding in extent that relinquished has been granted to each tribe. Of its climate, fertility, and capacity to support an Indian population, the representations are highly favorable.

To these districts the Indians are removed at the expense of the United States; and, with certain supplies of clothing, arms, ammunition, and other indispensable articles, they are also furnished gratuitously with provision for the period of a year after their arrival at their new homes. In that time from the nature of the country, and of the products raised by them, they can subsist themselves by agricultural labor, if they choose to resort to that mode of life; If they do not, they are upon the skirts of the great praries, where countless herds of Buffalo roam, and a short time suffices to adapt their own habits to the changes which a change of the animals destined for their food may require. Ample arrangements have also been made for the support of schools: in some instances council houses and churches are to be erected, dwellings constructed for the chiefs, and mills for common use. Funds have been set apart for the maintenance of the poor; the most necessary mechanical arts have been introduced, and blacksmiths, gunsmiths, wheelwrights, millwrights, &c. are supported among them. Steel and iron, and sometimes salt, are purchased for them; and ploughs, and other farming utensils, domestic animals, looms, spinning wheels, cards, &c. are presented to them. And besides these beneficial arrangements, annuities are, in all cases, paid, amounting, in some instances, to more than thirty dollars for each individual of the tribe, and in all cases sufficiently great, if justly divided and prudently expended, to enable them, in addition to their own exertions, to live comfortably. And as a stimulus for exertion, it is now provided by law that “in all cases of the appointment of interpreters, or other persons employed for the benefit of the Indians, a preference shall be given to persons of Indian descent, if such can be found who are properly qualified for the discharge of the duties.”

Such are the arrangements for the physical comfort, and for the moral improvement of the Indians. The necessary measures for their political advancement, and for their separation from our citizens, have not been neglected. The pledge of the U. States has been given by Congress, that the country destined for the residence of this people, shall be forever “secured and guarantied to them.” A country, west of Missouri and Arkansas, has been assigned to them, into which the white settlements are not to be pushed. No political communities can be formed in that extensive region, except [246] those which are established by the Indians themselves, or by the United States for them, and with their concurrence. A barrier has thus been raised, for their protection against the encroachments of our citizens, and guarding the Indians as far as possible, from those evils which have brought them to their present condition. Summary authority has been given, by law, to destroy all ardent spirits found in their country, without waiting the doubtful result and slow process of a legal seizure. I consider the absolute and unconditional interdiction of this article, among these people, as the first and great step in their melioration.

Halfway measures will answer no purpose. These cannot successfully contend against the cupidity of the seller, and the overpowering appetite of the buyer.—And the destructive effects of the trafic are marked in every page of the history of our Indian intercourse.

Some general legislation seems necessary for the regulation of the relations which will exist in this new state of things between the Government and people of the United States and these transplanted Indian tribes; and for the establishment among the latter, and with their own consent, of some principles of intercommunication, which their juxtaposition will call for; that moral may be substituted for physical force; the authority of a few and simple laws for the 2 tomahawk; and that an end may be put to those bloody wars, whose prosecution seems to have made part of their social system.

After the further details of this arrangement are completed, with a very general supervision over them, they ought to be left to the progress of events. These, I indulge the hope, will secure their prosperity and improvement; and a large portion of the moral debt we owe them will then be paid.”

In addition to the above we extract the following from the Report on Indian affairs, made to Congress at the present session:—we add and arrange according to circumstances, &c.

The united nation of Chippewas, Ottowas and Pottawatamies, about 1000 in number removed since September, 1834, possess five millions of acres of land, on the east side of the Missouri, and lying northwest of the northwest corner of the State of Missouri. [All these tribes may be rated at about 7000.]

The Choctaws, about 19,000 in number, have fifteen millions of acres lying between Red river and the Canadian.

The Creeks, about 3 or 4000, have thirteen millions, one hundred and forty thousand acres, on Arkansas, and Canadian rivers.

The Cherokees, amounting to, say 16,000, have thirteen millions of acres near the 36th degree of North Latitude.

The Senecas, and Shawnees, say 500, have 100,000 acres, on the western boundaries of the State of Missouri.

Of the native tribes west of the Mississippi, the report is as follows: Sioux

Sacs of the Missouri

*The agent has reported these Indians at upwards of two thousand.

In giving the above sketch of the Red men of the United States, many important items concerning their removal, location, rations, mechanics, expenses, religion, &c. &c. have been deferred till a more convenient season. The joy that we shall feel, in common with every honest American; and the joy that will eventually fill their bosoms, on account of nationalizing them— will be glory enough, when it comes, to show, that gathering them to themselves, and for themselves, to be associated with themselves, is a wise measure, and reflects the highest honor upon our Government. May they all be gathered in peace, and form a happy union among themselves. To which thousands may shout, Esto perpetua. —P