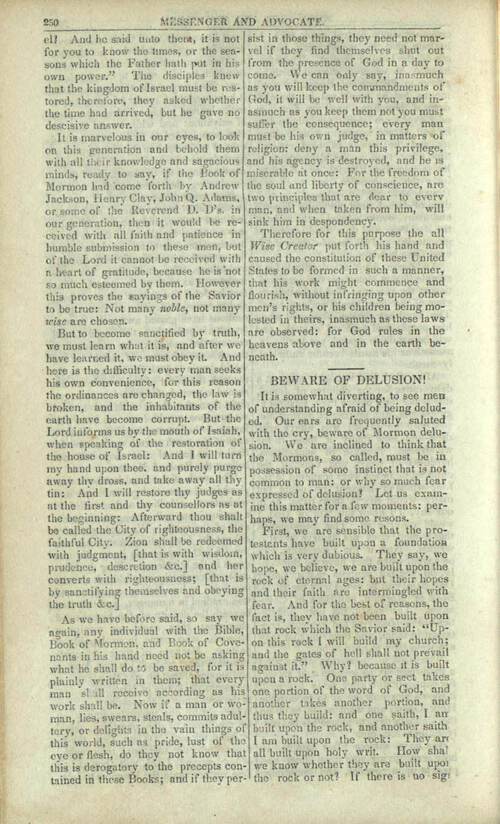 It is somewhat diverting, to see men of understanding afraid of being deluded. Our ears are frequently saluted with the cry, beware of Mormon delusion. We are inclined to think that the Mormons, so called, must be in possession of some instinct that is not common to man: or why so much fear expressed of delusion? Let us examine this matter for a few moments: perhaps, we may find some resons.

First, we are sensible that the protestants have built upon a foundation which is very dubious. They say, we hope, we believe, we are built upon the rock of eternal ages: but their hopes and their faith are intermingled with fear. And for the best of reasons, the fact is, they have not been built upon that rock which the Savior said: “Upon this rock I will build my church; and the gates of hell shall not prevail against it.” Why? because it is built upon a rock. One party or sect takes one portion of the word of God, and another takes another portion, and thus they build: and one saith, I am built upon the rock, and another saith, I am built upon the rock: They are all built upon holy writ. How shall we know whether they are built upon the rock or not? If there is no sign [250] given, then one man’s say so, is as good as another’s; provided his reasons are as good. Let us examine the scriptures. Mark, XVI: 15,16,17 and 18. And he said unto them, [his apostles,] &c.

Here is a sign given: “These signs shall follow them that believe, They shall heal the sick, cast out devils,” &c. &c &c. We ask for these signs. We look among the Presbyterians: no such signs there. We look among Methodists, Episcopalians, Baptists, Universalists, &c. &c &c.: but, we find none of these signs.

Now we ask, are they built upon the rock, upon which the ancients built? no. If they are, they are built of different materials, consequently they must be hay wood, or stubble.

But here comes a sect called “Mormons.” They lay hands on the sick and they recover:

As soon as any of the signs, spoken of by the Savior, follow a sect of people; and the work of God begins to rise out of darkness and obscurity, the adversary sends forth all the lies, and calumny, that he can invent, by the aid of a wicked and adulterous generation: to impede the progress of the work of the Lord. And then cry delusion, false prophets, &c.

The Savior, while speaking to some of his servants, says: “Contend against no church save it be the church of the devil.” Now the question would arise, How many churches are there?

But here is that piece of deception, the book of Mormon, that choice treasure, a way mark to happiness, a stepstone to the kingdom of God; yes, the diploma of the elders of the church of Christ of Latter Day Saints: A messenger sent forth to prepare the way for the return of the house of Israel; it has caused thousands to rejoice already in the prospects that are laying before them.

But the vanity, the unbelief, the darkness, and wickedness of this generation; has caused many to fulfill the predictions of Nephi, He saith: “Many will say in that day, a Bible, a Bible, we have got a Bible &c.” These things are fulfilling in the eyes of a wicked and gainsaying generation.

And yet they say: Lo, here is Christ and lo there:” But the Savior saith believe them not: for they are blind leading the the blind. We ask again where are the signs spoken of by Mark. [Mark XVI: 15,16,17, & 18.] O! ye inhabitants of the earth, judge ye a righteous judgement. “By your fruits ye shall be known.”

In ancient days they that believed, healed the sick, cast out devils, and spoke with new tongues, &c. Where are the fruits of the believer in this generation. We know that none of the signs spoken of by Mark, are manifest in the world.

The Latter Day Saints are, progressing slowly: and as they advance in grace and righteousness, they obtain the gifts set forth, in their proper order. Here is a mystery: Why do not all these gifts follow the Latter Day Saints, if they are built upon the rock? We will also ask a question. Why cannot an infant walk alone?

All the slangs, falsehoods, and persecutions, that are flooding this continent, against the book of Mormon and the work of the Lord in our days; remind us of the following saying: “If we let him thus alone, all men will believe on him; and the Romans shall come and take away our prince and nation. And one of them being named Caiphas, being the high priest that same year, said unto them, ye know nothing at all.”

It is evident that the great godess of this generation is in danger of being exposed, in consequence of the forthcoming of the book of Mormon: which book speaks against priestcraft.

The Lord has said: “And it shall come to pass, that there shall be a great work in the land even among the Gentiles: for their folly and their abominations shall be made manifest, in the eyes of all people: for I am God and mine arm is not shortened and I will show miracles, signs and wonders, unto all those[252] who believe on my name.” But we expect to see in this generation, as they saw in the days of the Savior, men who would not believe even the things that they saw with their own eyes. Look at the apostles if you please for an example: The Savior told them before his death, that he should rise the third day; but after his resurrection, what said Thomas, he did not believe until after he had thrust his hand in his side, &c. he was however persuaded to believe in the fulfillment of the words of the Savior: “My sheep hear my voice and follow me.”

We have no doubt, but the elect will hearken; hear, understand, receive, and obey the truth, no matter how many cry false prophet, deception, gold Bible, delusion! delusion!! We are sensible, that every person must stand or fall for himself, and we are confident that every one will receive according to his works. If a person has been lying, will he not receive the reward of a liar; or evil speaking of his neighbor; or false swearing, or any other abomination; will he not receive the reward of his works? We know that the most vile, most base, most wicked, and most unprincipled heathen, cries delusion, false prophet, Jo Smith, gold Bible. But what astonishes us, is, that those who call themselves the disciples of Jesus, will cry the same things: and why? we conclude it is because they are of the same spirit.