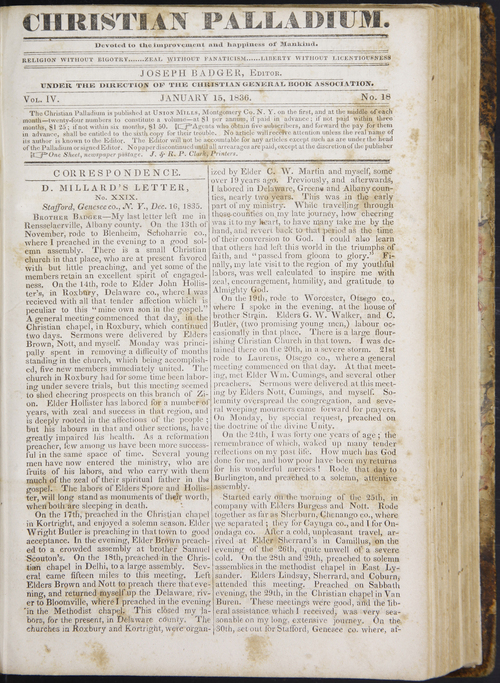 BROTHER BADGER—We have of late been favored with plenty of Mormon Preachers.

For my own information I borrowed the Mormon Book and examined it for myself, and if I am not very much mistaken the book is all a farce. To give all my objections to the work, I have not time or patience; but, I will refer your readers to a passage under the 582d page.

“Wherefore, if little children could not be saved without baptism, these must have gone to an endless Hell.—Behold I say unto you, that he that supposeth that little children needeth baptism, is in the gall of bitterness and in the bond of iniquity for he hath neither faith, hope, or charity: wo be unto him that shall pervert the ways of the Lord after this manner, for they shall perish except they repent.” And again “wo unto such for they are in danger of death, hell and endless torments.” This Brother, is driving business in earnest. The best information that we have is, that Lehi and his family, came from Jerusalem to America, that in process of time, Jesus Christ showed himself after his crucifiction to them. See chap. 5, page 476. Now, is it not extraordinary that in this new world, there should have sprung up the same opinion, in favor of infant baptism as was believed in the old world, and second; is it not extraordinary when they had writers and men, endowed with the Holy Ghost, that the inhabitants when found by Columbus and others, should have been so horribly destitute of the gospel, or of any tradition relative to it. Nothing left but the golden leaves which Jo. Smith, said he found in Manchester, Ontario Co. N.Y. This is as great a mystery as the Trinity. Who can or do denounce all who hold that little children ought to be baptized are in the gall of bitterness and in danger of hell and endless torments. Thousands think, and justly think too, that it has no foundation in truth, yet, who could say this of the pious reformers; of a Wesley, a Fletcher, a Nelson, and hundreds of devoted Pædo Baptists of this country. My soul revolts from the thought. I spurn it from me, as the effusion of a fanatic, and I would ask those advocates of this very singular production, the Mormon Book, if they do not think that Mr. Mormon in this, made a very wild shot! and we think that even Smith himself must shudder at this extravagant paragraph in looking at it anew. He may hold a conference with himself, and in conclusion cry: Wesley! Wesley! where art thou? My book of Mormon has denounced thee as in the gall of bitterness, in danger of hell and endless torments. No answer is given—all is as silent as the shades of death. The ashes of the pious Wesley sleep undisturbed.

What! no answer given. Methinks I see his works springing up, well seasoned with the holy unction from on high. Sinners melted down by the power of God under his ministry.—I too hear the dead speak in thousands of volumns now scattered over Europe and America, the very substance of all that is excellent in the Book of God, or Christian experience. He now lives in the paradise of God. He lives in the hearts of almost an innumerable company of saints. May God Almighty save this land from every wile of the Devil.