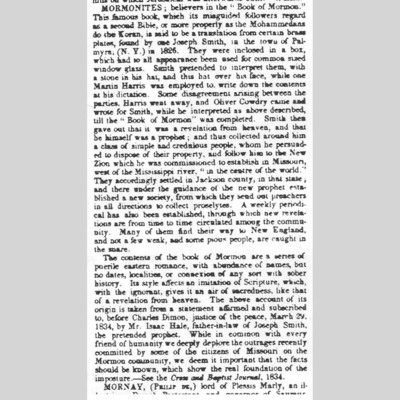 MORMONITES; believers in the “Book of Mormon.” This famous book, which its misguided followers regard as a second Bible, or more properly as the Mohammedans do the Koran, is said to be a translation from certain brass plates, found by one Joseph Smith, in the town of Palmyra, (N. Y.) in 1826. They were enclosed in a box, which had to all appearance been used for common sized window glass. Smith pretended to interpret them, with a stone in his hat, and this hat over his face, while one Martin Harris was employed to write down the contents at his dictation. Some disagreement arising between the parties, Harris went away, and Oliver Cowdry came and wrote for Smith, while he interpreted as above described, till the “Book of Mormon” was completed. Smith then gave out that it was a revelation from heaven, and that he himself was a prophet; and thus collected around him a class of simple and credulous people, whom he persuaded to dispose of their property, and follow him to the New Zion which he was commissioned to establish in Missouri, west of the Mississippi river, “in the centre of the world.”

They accordingly settled in Jackson county, in that state; and there under the guidance of the new prophet established a new society, from which they send out preachers in all directions to collect proselytes. A weekly periodical has also been established, through which new revelations are from time to time circulated among the community. Many of them find their way to New England, and not a few weak, and some pious people, are caught in the snare.

The contents of the book of Mormon are a series of puerile eastern romance, with abundance of names, but no dates, localities, or connexion of any sort with sober history. Its style affects an imitation of Scripture, which, with the ignorant, gives it an air of sacredness, like that of a revelation from heaven. The above account of its origin is taken from a statement affirmed and subscribed to, before Charles Dimon, justice of the peace, March 29, 1834, by Mr. Isaac Hale, father-in-law of Joseph Smith, the pretended prophet. While in common with every friend of humanity we deeply deplore the recent outrages recently committed by some of the citizens of Missouri on the Mormon community, we deem it important that the facts should be known, which show the real foundation of the imposture.—See the Cross and Baptist Journal, 1834.