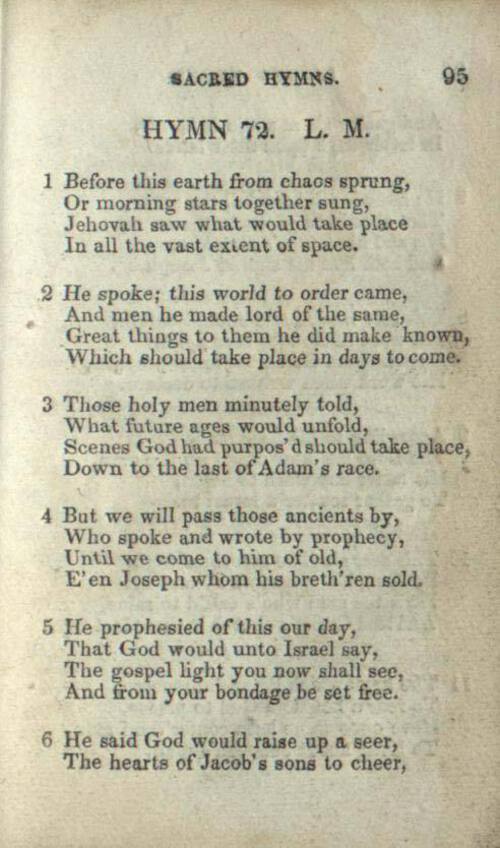 “Before This Earth From Chaos Sprung.” A Collection of Sacred Hymns, for the Church of the Latter Day Saints, 95–97. Kirtland, Ohio: F. G. Williams & Company, 1835.

1 Before this earth from chaos sprung, Or morning stars together sung,

Jehovah saw what would take place In all the vast extent of space.

2 He spoke; this world to order came, And men he made lord of the same,

Great things to them he did make known, Which should take place in days to come.

What future ages would unfold,

Scenes God had purpos’d should take place, Down to the last of Adam’s race.

4 But we will pass those ancients by, Who spoke and wrote by prophecy,

Until we come to him of old,

E’en Joseph whom his breth’ren sold.

5 He prophesied of this our day,

That God would unto Israel say,

The gospel light you now shall see,

And from your bondage be set free.

And gather them again in bands,

In latter days upon their lands.

7 He likewise did foretell the name, That should be given to the same,

His and his father’s should agree,

8 This seer like Moses should obtain, The word of God for man again;

A spokesman God would him prepare,

His word when written to declare.

9 According to his holy plan,

The Lord has now rais’d up the man, His latter day work to begin,

To gather scatter’d Israel in.

10 This seer shall be esteemed high, By Joseph’s remnants by and by,

He is the man who’s call’d to raise, And lead Christ’s church in these last days.

11 The keys which Peter did receive, To rear a kingdom God to please.

Have once more been confer’d on man, To bring about Jehovah’s plan. [96]

12 The key of knowledge long since lost, Has virtue still as at the first,

To bring to light things of great worth, And thus with knowledge fill the earth.

13 Then none need to his neighbor say, Know thou the Lord, this is the way, For all shall know him who shall stand, Both old and young in all the land.

14 Now let the saints both far and near, And scatter’d Israel, when they hear This news, rejoice in Israel’s God,

And sing, and praise his name aloud.