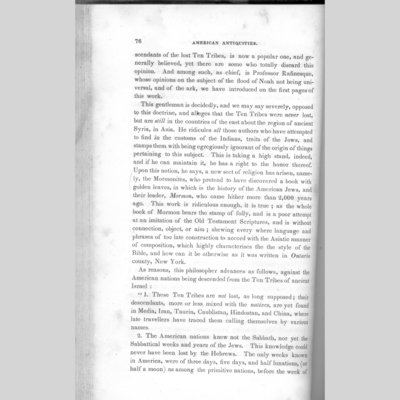 This gentleman is decidedly, and we may say severely, opposed to this doctrine, and alleges that the Ten Tribes were never lost, but are still in the countries of the east about the region of ancient Syria, in Asia. He ridicules all those authors who have attempted to find in the customs of the Indians, traits of the Jews, and stamps them with being egregriously ignorant of the origin of things pertaining to this subject. This is taking a high stand, indeed, and if he can maintain it, he has a right to the honor thereof.

Upon this notion, he says, a new sect of religion has arisen, namely, the Mormonites, who pretend to have discovered a book with golden leaves, in which is the history of the American Jews, and their leader, Mormon, who came hither more than 2,000 years ago.

This work is ridiculous enough, it is true; as the whole book of Mormon bears the stamp of folly, and is a poor attempt at an imitation of the Old Testament Scriptures, and is without connection, object, or aim; shewing every where language and phrases of too late construction to accord with the Asiatic manner of composition, which highly characterises the the style of the Bible, and how can it be otherwise as it was written in Ontario county, New York.