To the Elders of the Church of the Latter Day Saints 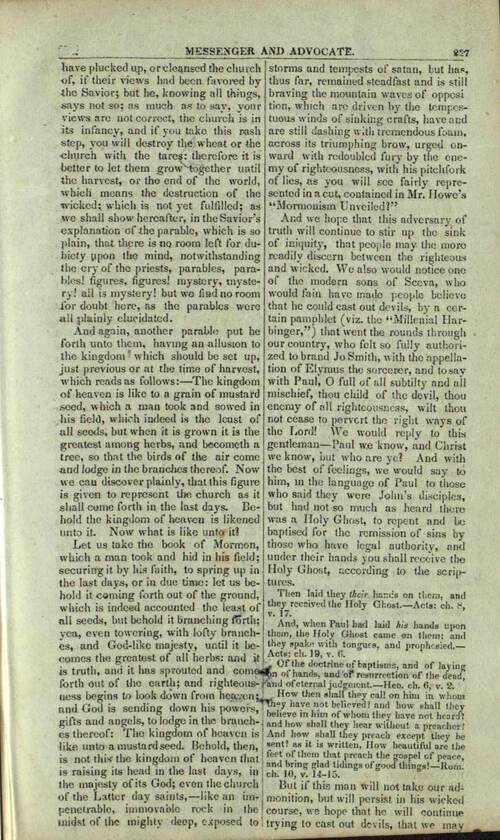 Let us take the book of Mormon, which a man took and hid in his field; securing it by his faith, to spring up in the last days, or in due time: let us behold it coming forth out of the ground, which is indeed accounted the least of all seeds, but behold it branching forth; yea, even towering, with lofty branches, and God-like majesty, until it becomes the greatest of all herbs: and it is truth, and it has sprouted and come forth out of the earth; and righteousness begins to look down from heaven; and God is sending down his powers, gifts and angels, to lodge in the branches thereof: The kingdom of heaven is like unto a mustard seed. Behold, then, is not this the kingdom of heaven that is raising its head in the last days, in the majesty of its God; even the church of the Latter day saints,--like an impenetrable, immovable rock in the midst of the mighty deep, exposed to storms and tempests of satan, but has, thus far, remained steadfast and is still braving the mountain waves of opposition, which are driven by the tempestuous winds of sinking crafts, have and are still dashing with tremendous foam, across it triumphing brow, urged onward with redoubled fury by the enemy of righteousness, with his pitchfork of lies, as you will see fairly represented in a cut, contained in Mr. Howe’s “Mormonism Unveiled?”

And we hope that his adversary of truth will continue to stir up the sink of iniquity, that people may the more readily discern between the righteous and wicked. We also would notice one of the modern sons of Sceva, who would fain have made people believe that he could cast out devils, by a certain pamphlet (viz. the “Millenial Harbinger,”) that went the rounds through our country, who felt so fully authorized to brand Jo Smith, with the appellation of Elymus the sorcerer, and to say with Paul, O full of all subtilty and all mischief, thou child of the devil, thou enemy of all righteousness, wilt thou not cease to pervert the right ways of the Lord! We would reply to this gentleman--Paul we know, and Christ we know, but who are ye? [. . . ]

We might farther say that, we could introduce him to “Mormonism Unveiled.” Also to the right honorable Doct. P. Hurlburt, who is the legitimate author of the same, who is not so much a doctor of physic, as of falsehood, or by name. We could also give him an introduction to the reverend Mr. Howe, the illegitimate author of “Mormonism Unveiled,” in order to give currency to the publication, as Mr. Hurlburt, about this time, was bound over to court, for threatening life. He is also an associate of the celebrated Mr. Clapp, who has of late immortalised his name by swearing that he would not believe a Mormon under oath; and by his polite introduction to said Hurlburt’s wife, which cost him (as we have been informed) a round sum.

Also his son Mathew testified that, the book of Mormon had been proved false an hundred times, by How’s book: and also, that he would not believe a Mormon under oath. And also we could mention the reverend Mr. Bentley, who, we believe, has been actively engaged in injuring the character of his brother-in-law, viz: Elder S. Rigdon.