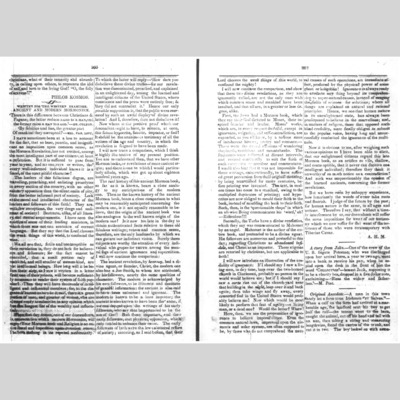 WRITTEN FOR THE WESTERN EXAMINER.

‘There is this difference between Christians & Pagans; the latter reduce a GOD to a MAN, and the former raise a MAN to a GOD.’—Dr. Colton.

‘By falsities and lies, the greater part OF mankind they corrupted!’—MIL. PAR. LOST, I HAVE sometimes been at a loss to account for the fact, that so base, puerile, and insignificant an imposition upon common sense, as the Mormon Revelation, has not excited, among the most intelligent part of our citizens, at least a refutation. But it is suffered the pass from year to year, and no one says or writes, tho’ every well-informed individual knows it is a fraud, of the most pitiful character!

The leaders of this fallacious dogma, are travelling, preaching, and enlisting proselytes in every section of the country, with no other salutary opposition than the silent smile of pity, from the better informed part of society. Look at the moral and intellectual character of the leaders and followers of this faith! They are, with few exceptions, the very dregs and sediment of society!

Destitute, alike, of all literary and mental acquirements. I have seen the epistles of some of their leading ministers, in which there was not one sentence of correct language. But they say that the Lord chooses the weak things of this world, to confound the wise.

We all see that, futile and contemptible as their revelation is, they do not lack for believers and followers; for the fact cannot be conceiled, that a small portion only of mankind, and still smaller of woman- kind, are yet intellectual beings. How long will it be before their siety, as I saw it written in a letter from one of their priests, will become sufficiently numerous to render their system of faith popular? Then they will have thousands of intelligent and influential members; for, to the disgrace of human nature be it said, there is a great portion of men, and greater of women, who are always ready to subscribe to any opinion which has the longest list of the wealthy and influential.

When that day comes, one of our descendants, in conversation with a modern Mormonite, will say—’Your Mormon book and Religion is an entire fraud and imposition upon common sense; I believe nothing in its reputed authenticity.’ To which the latter will reply—’How dare you disbelieve these divine truths—for our revelation was disseminated, preached, and explained in an enlightened day, among the learned and intelligent citizens of the United States, where conscience and the press were entirely free; & they did not contradict it.’ Hence our only possible supposition is, that the public were overawed by such an awful display of divine revelation! And I, therefore, dare not disbelieve it!

Now where is the positive proof which our descendant ought to have, to silence, at once, this future hypocrite, fanatic, impostor, or fool? It should be the unanimous testimony of all the writers of the age and country, in which the revelation is feigned to have been made.

I will now trace a comparison, which I think is highly illustrative of my present position.

You are to understand then, that we have other Mormon books, or revelations of more ancient origin; and there is one to which I would particularly allude, which was got up about eighteen hundred years ago.

The real history of this ancient Mormon book, so far as it is known, bears a close analogy to my anticipations of the modern one. Then as the known history of the ancient Mormon book, bears a close comparison to what may be reasonably anticipated concerning the modern one, is it not equally reasonable to believe, that the origin of the ancient book was also analogous to the well known origin of the modern one? Is it now too late in the day to obtain authenticated facts relative to these old fabulous writings; reason and common sense, therefore, are the only landmarks by which we can govern our indistinct vision. Surely these subjects are worthy the attention of every individual who gropes for TRUTH among the mental fogs of ancient ignorance and superstition. I will now continue the comparison.

The ancient revelation, by hearsay, had a divine agent, or founder, Christ, the modern one also has a Joe Smith, to whom are attributed, by his followers, nearly the same qualities of character. The modern is acknowledged by his own followers, to be illiterate and destitute of general information: the ancient is also said to have been unlearned and ignorant. The modern is known to be a base impostor; the ancient is also known to have been the same, if we can depend upon the writings of his early followers, who say that he pretended to be the son of God! Both these impostors, and their early followers, met physical opposition, which only tended to enhance their cause. The early followers of both were the low unlettered refuse of society; asserting, as I said before, that their [366] Lord chooses the weak things of this world, to confound the mighty!

I will now continue the comparison, and show that these two divine revelations, as they are ignorantly called, are not the only ones with which common sense and mankind have been insulted, and that all are, in a greater or lesser degree, alike.

First, the Jews had a Mormon book, which they say their God dictated to Moses, their inspired founder and leader. Moses’ works, which are, in every respect doubtful, except in ignorance, vulgarity, and self-contradiction, are expanded, as you all know, by a tedious mass of incoherent history, poetry and romance.—These were the casual effusions of wandering shepherds, musicians, and mountebanks. The fragments were collected at distant intervals, and revised continually to suit the faith of each successive transcriber and commentator. I would also hint that it was not impossible for these writings, unintentionally, to have suffered great perversion from their original meaning, by being transcribed for many centuries, before printing was invented. The text, in modern times has come to a standard, owing to the multiplied duplicates of printing; and hypocrites are now obliged to mould their faith to the book, instead of moulding the book to their faith. Such, then, is the ‘questionable shape’ in which an all-wise Being communicates his ‘word,’ eh!—Ridiculous!!!

Secondly, the Turks have a divine revelation, which they say was communicated to Mahomet by an angel. Mahomet is the author of the entire book, and pretended to be a divine agent. His followers are numerous and powerful to this day; regarding Christians as abandoned infidels, and Christ as an impostor. These stigmas are retorted by christians, but are applicable to both!

I will now introduce an illustration of the credulity of ignorance: If I should say I saw a living man, in day time, leap over the two-horned church in Cincinnati, probably no person in the world would believe me; but if I should say I saw a corse rise out of the church-yard near that building in the night, leap over it and back again; then take wings and fly away, every converted fool in the United States would probably believe me! Now which would be most likely to perform that feat of agility—a living man, or a dead one? Would the latter? Whew!

Here, then, we see the propensities of ignorance to believe impossibilities. Even the common natural laws, impressed upon the elements and solar system, are often supposed to be, by those who do not comprehend the natural causes of such operations, an immediate effect, produced by the physical power of some ghost or hobgoblin! Ignorance is always ready to attribute any thing beyond its comprehension to super-natural causes, instead of ranging the fields of science for solutions; where all things are explained on natural and rational principles.

Hence, we see that human nature in its unenlightened state, has always been predisposed to believe in the marvellous; and, in matters of religion, those that opposed such blind credulity, were finally obliged to submit to the popular voice, having long and unsuccessfully combatted the ignorance of the multitude.

Now it is obvious to me, after weighing such various opinions as I have been able to elicit, that our enlightened citizens regard this late Mormon book, as an artifice so vile, shallow, and contemptible, that it never can deceive one intelligent individual; therefore they think it unworthy of so much notice as a contradiction! And such was unquestionably the opinion of the learned ancients, concerning the former revelations.

But we have seen by unhappy experience, how luxuriantly the weeds of error take roots and flourish. I judge of the future by the past; for human nature is the same, in all ages and nations. Therefore I say, that without a timely interference by us, our desendants will suffer the same impositions for want of our testimony which we now suffer for the want of the testimony of those who were contemporary with Tiberias Caesar.