The Record of the Nephites 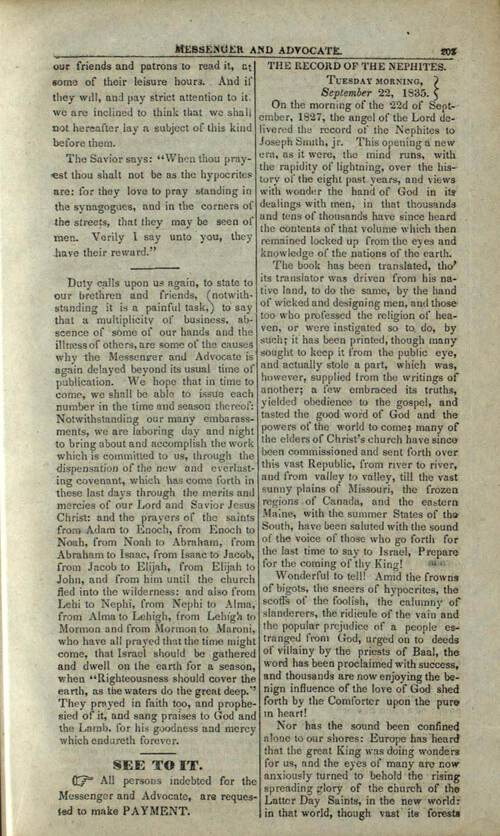 THE RECORD OF THE NEPHITES.

On the morning of the 22d of September, 1827, the angel of the Lord delivered the record of the Nephites to Joseph Smith, jr. This opening a new era, as it were, the mind runs, with the rapidity of lightning, over the history of the eight past years, and views with wonder the hand of God in its dealings with men, in that thousands and tens of thousands have since heard the contents of that volume which then remained locked up from the eyes and knowledge of the nations of the earth.

The book has been translated, tho’ its translator was driven from his native land, to do the same, by the hand of wicked and designing men, and those too who professed the religion of heaven, or were instigated so to do, by such; it has been printed, though many sought to keep it from the public eye, and actually stole a part, which was, however, supplied from the writings of another; a few embraced its truths; yielded obedience to the gospel, and tasted the good word of God and the powers of the world to come; many of the elders of Christ’s church have since been commissioned and sent forth over this vast Republic, from river to river, and from valley to valley, till the vast sunny plains of Missouri, the frozen regions of Canada, and the eastern Maine, with the summer States of the South, have been saluted with the sound of the voice of those who go forth for the last time to say to Israel, Prepare for the coming of thy King!

Wonderful to tell! Amid the frowns of bigots, the sneers of hypocrites, the scoffs of the foolish, the calumny of slanderers, the ridicule of the vain and the popular prejudice of a people estranged from God, urged on to deeds of villainy by the priests of Baal, the word has been proclaimed with success, and thousands are now enjoying the benign influence of the love of God shed forth by the Comforter upon the pure in heart!

Nor has the sound been confined alone to our shores: Europe has heard that the great King was doing wonders for us, and the eyes of many are now anxiously turned to behold the rising spreading glory of the church of the Latter Day Saints, in the new world: in that world, though vast its forests [203] and broad its rivers, where but a few centuries ago the roaming red man chased the buffalo, the elk & the bounding deer unmolested and alone, now subdued, the Father of mercies has lifted to the nations of the earth a standard, has raised up, to the gaze of the world, an ensign, has caused his voice to be heard, has shown to his faithful ones that Israel is about to be gathered, the indignation toward the Jews is also to cease, and that he will soon bring the house of Jacob from the north country, and gather them from the coasts of the earth, the blind, the lame, the aged and the suckling, that they may sing in the height of Zion, and flow together to the goodness of the Lord!

Prepare your hearts, O ye saints of the Most High, for great things await you! Hasten ye, hasten ye, to the places of gathering, for after a little the indignation of the Lord will cease toward those who are called by his name, and then his arm must fall upon the wicked. His sword is bathed in heaven, and must fall upon Idumea, and who can stand amid the crash and fall of empires?

Sanctify yourselves, O ye servants of the Lord, for much is required at your hands: the blood of souls will cry against you except you hasten on your mission: yes, let all raise their warning voice, in meekness and in mildness, for soon will there be a famine for the word of God.

Listen, O ye elders, for soon the voice from distant lands will salute you,—Come over and help us! Think, for a moment, on the millions in your own land who are destitute of the word of life; think also on the vast multitudes whose thoughts never reached our shores, who are now perishing for lack of vision, and bowing to idols; think of the numberless islands where darkness and the shadow of death prevail, whose waters never covered a soul for the remission of sins, & whose groves, though spicy, were never saluted with the voice of one who proclaimed life and immortality through the power of a risen Savior!

Should one ask, what has been done during these eight years, of which you speak? I would say, the first two and a half only translated and printed the record, and organized the church with six members! and the fruit of the labor of five and a half are so great that the hearts of thousands are astonished; the vail of superstition has been rent from the minds of many; the church increased to thousands; the list of elders multiplied to hundreds; the deaf have heard the words of the book; the eyes of the blind have seen out of obscurity and out of darkness; the meek have increased, (for their joy is in the Lord,) the poor among men rejoice in the Holy One of Israel; many that erred in spirit have come to understanding, while others that murmured have learned doctrine.