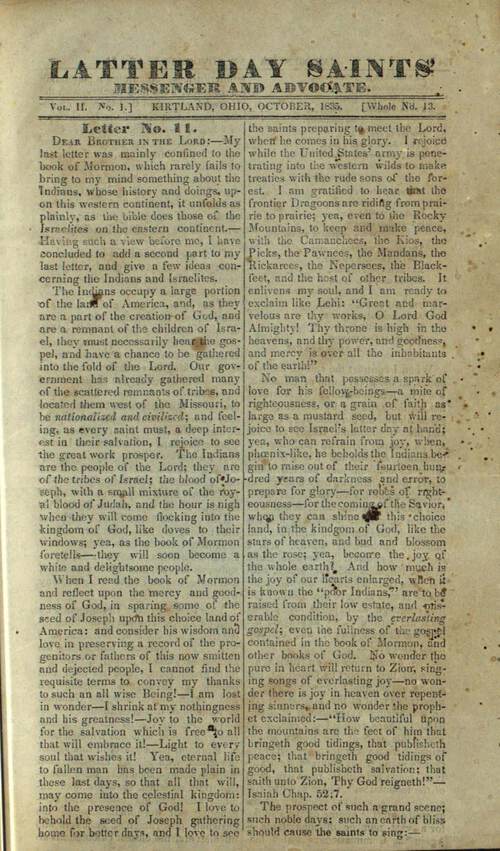 DEAR BROTHER IN THE LORD:—My last letter was mainly confined to the book of Mormon, which rarely fails to bring to my mind something about the Indians, whose history and doings, upon this western continent, it unfolds as plainly, as the bible does those of the Israelites on the eastern continent.—Having such a view before me, I have concluded to add a second part to my last letter, and give a few ideas concerning the Indians and Israelites.

The Indians occupy a large portion of the land of America, and, as they are a part of the creation of God, and are a remnant of the children of Israel, they must necessarily hear the gospel, and have a chance to be gathered into the fold of the Lord. Our government has already gathered many of the scattered remnants of tribes, and located them west of the Missouri, to be nationalized and civilized; and feeling, as every saint must, a deep interest in their salvation, I rejoice to see the great work prosper. The Indians are the people of the Lord; they are of the tribes of Israel; the blood of Joseph, with a small mixture of the royal blood of Judah, and the hour is nigh when they will come flocking into the kingdom of God, like doves to their windows; yea, as the book of Mormon foretells—they will soon become a white and delightsome people.

When I read the book of Mormon and reflect upon the mercy and goodness of God, in sparing some of the seed of Joseph upon this choice land of America: and consider his wisdom and love in preserving a record of the progenitors or fathers of this now smitten and dejected people, I cannot find the requisite terms to convey my thanks to such an all wise Being!—I am lost in wonder—I shrink at my nothingness and his greatness!—Joy to the world for the salvation which is free to all that will embrace it!—Light to every soul that wishes it! Yea, eternal life to fallen man has been made plain in these last days, so that all that will, may come into the celestial kingdom: into the presence of God! I love to behold the seed of Joseph gathering home for better days, and I love to see the saints preparing to meet the Lord, when he comes in his glory. I rejoice while the United States’ army is penetrating into the western wilds to make treaties with the rude sons of the forest. I am gratified to hear that the frontier Dragoons are riding from prairie to prairie; yea, even to the Rocky Mountains, to keep and make peace, with the Camanchees, the Kios, the Picks, the Pawnees, the Mandans, the Rickarees, the Nepersees, the Blackfeet, and the host of other tribes. It enlivens my soul, and I am ready to exclaim like Lehi: “Great and marvelous are thy works, O Lord God Almighty! Thy throne is high in the heavens, and thy power, and goodness, and mercy is over all the inhabitants of the earth!”

No man that possesses a spark of love for his fellow-beings—a mite of righteousness, or a grain of faith as large as a mustard seed, but will rejoice to see Israel’s latter day at hand; yea, who can refrain from joy, when, phoenix-like, he beholds the Indians begin to raise out of their fourteen hundred years of darkness and error, to prepare for glory—for robes of righteousness— for the coming of the Savior, when they can shine on this choice land, in the kingdom of God, like the stars of heaven, and bud and blossom as the rose; yea, become the joy of the whole earth? And how much is the joy of our hearts enlarged, when it is known the “poor Indians,” are to be raised from their low estate, and miserable condition, by the everlasting gospel; even the fullness of the gospel contained in the book of Mormon, and other books of God. No wonder the pure in heart will return to Zion, singing songs of everlasting joy—no wonder there is joy in heaven over repenting sinners, and no wonder the prophet exclaimed:—“How beautiful upon the mountains are the feet of him that bringeth good tidings, that publisheth peace; that bringeth good tidings of good, that publisheth salvation; that saith unto Zion, Thy God reigneth!”—Isaiah Chap. 52:7.

The prospect of such a grand scene; such noble days; such an earth of bliss should cause the saints to sing:—[193]

While heaven and earth rejoices,

In strains of holy praise,

For bliss that crowns our days,

See eye to eye, in Zion,

Rebukes the world of sin,

And makes his church begin To fill the earth.

Ye blessed of the Father,

The plagues will soon be over—

The Lord his face uncover,

And all the pure in heart,

Beyond the power of art,

Be blest in heaven.

The earth shall then be holy,

And saints and angels boldly,

Without a vail between,

Will see as they are seen,

And walk with God.

The commissioners on Indian affairs, in their report to Congress, last spring, stated, that there were “seventy nine tribes west of the Mississippi river, comprising a population of 312,610.” These tribes I suppose, must reside this side of the Rocky Mountains—because common report says that as many tribes embracing certainly as much population, must live west of the mountains. There are fine rivers, beautiful valleys, extensive plains, as well as fertile shores on the Pacific, for a vast number of inhabitants.—Again the Commissioners stated that “thirty tribes, containing a population of 156,310, have held treaties with the United States, and that there is an Indian population east of the Mississippi, of 92,676,”—making a total of 405,286.

Now allowing the same number west of the Mountains, and suppose 800,000, in the northern regions of the Canadas, and 500,000 in South America, there will be 2,110,562 of the sons of Joseph, and of the remnants of the Jews. A goodly number to be willing in the day of the Lord’s power, to help build up the waste places of Zion. A blessed band to be restored to mercy and enjoy the chief things of ancient mountains; even the deep things that couch beneath.

The parts of the globe that are known probably contain 700 millions of inhabitants, and those parts which are unknown may be supposed to contain more than four times as many more, making an estimated total of about three thousand, five hundred and eighty millions of souls: Let no man marvel at this statement, because there may be a continent at the north pole, of more than 1300 square miles, containing thousands of millions of Israelites, who, after a high way is cast up in the great deep, may come to Zion, singing songs of everlasting joy. The Lord must bring to pass the words of Isaiah, which say to the NORTH, “Give up; and to the South; keep not back: bring my sons from far, and my daughters from the ends of the earth.” From the north and south END, I presume, as no one has ever pretended, that there was an end to the globe any where else.

This idea is greatly strengthened by reading Zenos’ account of the tame olive tree in the book of Mormon, page 131. The branches planted in the nethermost parts of the earth, “brought forth much fruit,” and no man that pretends to have pure religion, can find “much fruit” among the Gentiles, or heathen of this generation.

The reason I have for the above statement, in accordance with the book of Mormon, is, because, in this age of the world, with all its missionaraies, and missionary societies, bible societies, tract societies, sunday school unions, and printing establishments,—counting all the inhabitants of the christian governments, believers and unbelievers, the closest calculations al-

I can only turn, then, to the infant church of Christ of latter day saints, and pray the Lord to keep it in the right way, and all things for the edification, and for the salvation of men, and for the glorification of God, will be in the possession of the saints.—The Lord has not changed, his gospel is the same from the beginning to the end; neither is he slack; his promises and gifts to men never fail, if they continue faithful in all his commandments: The Lord is the same in time and in eternity, yesterday, to-day and forever. If we, as saints, are pure before him, what Enoch saw we can see;—what Moses did we can do; what Peter had we can have; what the saints endured we can endure; and what the righteous receive we shall receive.—Glorious prospect!

What joy to come! O I want a world of words—a universe of praise, and an eternity of gratitude, to thank the Lord for what he has done, and will do for those that love and serve him faithfully to the end. Not that the saints expect to labor for the corruptible treasures of the world, or honors such as the Gentiles seek: As the church of Christ we plough not the ocean for wealth; we visit not foreign climes for gold; we risk not our lives among all manner of men for fame:—no; the servants of Jesus Christ go whithersoever he commands them to carry glad tidings—to proclaim salvation to all that will accept of it, according to the conditions of the gospel—that the kingdom of heaven may come:—yea, the joyful day be ushered in, when Israel shall be gathered from the four quarters of the earth, to meet their Redeemer, and have their ungodliness turned away.

Glory to God in the highest: let peace reign among his children, and let good will and mercy become a sweet invitation to the poor Indians, that they may come into the kingdom prepared from the foundation of the world, and receive their penny, with songs of everlasting joy.