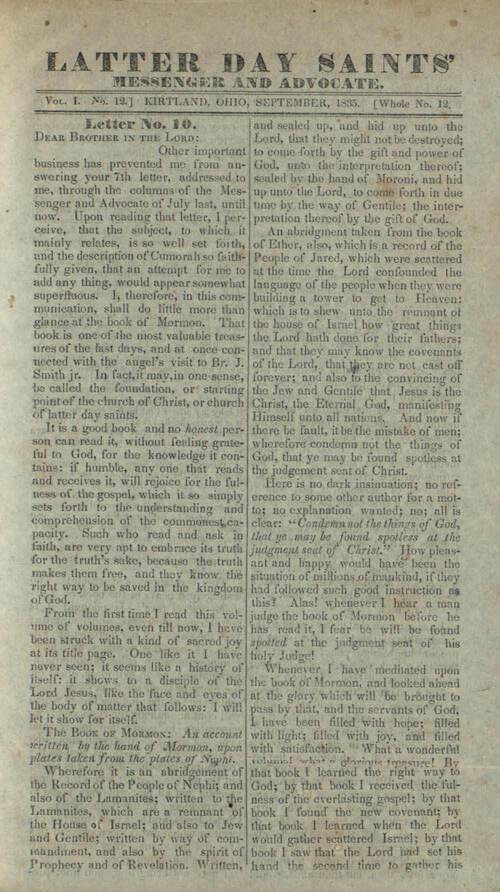 DEAR BROTHER IN THE LORD:

Other important business has prevented me from answering your 7th letter, addressed to me, through the columns of the Messenger and Advocate of July last, until now. Upon reading that letter, I perceive, that the subject, to which it mainly relates, is so well set forth, and the description of Cumorah so faithfully given, that an attempt for me to add any thing, would appear somewhat superfluous. I, therefore, in this communication, shall do little more than glance at the book of Mormon. That book is one of the most valuable treasures of the last days, and at once connected with the angel’s visit to Br. J. Smith jr. In fact, it may,in one sense, be called the foundation, or starting point of the church of Christ, or church of latter day saints.

It is a good book and no honest person can read it, without feeling grateful to God, for the knowledge it contains: if humble, any one that reads and receives it, will rejoice for the fulness of the gospel, which it so simply sets forth to the understanding and comprehension of the commonest capacity. Such who read and ask in faith, are very apt to embrace its truth for the truth’s sake, because the truth makes them free, and they know the right way to be saved in the kingdom of God.

From the first time I read this volume of volumes, even till now, I have been struck with a kind of sacred joy at its title page. One like it I have never seen; it seems like a history of itself: it shows to a disciple of the Lord Jesus, like the face and eyes of the body of matter that follows: I will let it show for itself.

The BOOK OF MORMON: An account written by the hand of Mormon, upon plates taken from the plates of Nephi.

Wherefore it is an abridgement of the Record of the People of Nephi; and also of the Lamanites; written to the Lamanites, which are a remnant of the House of Israel; and also to Jew and Gentile; written by way of commandment, and also by the spirit of Prophecy and of Revelation. Written, and sealed up, and his up unto the Lord, that they might not be destroyed; to come forth by the gift and power of God, unto the interpretation thereof; sealed by the hand of Moroni, and hid up unto the Lord, to come forth in due time by the way of Gentile; the interpretation thereof by the gift of God.

An abridgment taken from the book of Ether, also, which is a record of the People of Jared, which were scattered at the time the Lord confounded the language of the people when they were building a tower to get to Heaven: which is to shew unto the remnant of the house of Israel how great things the Lord hath done for their father; and that they may know the covenants of the Lord, that they are not cast off forever; and also to the convincing of the Jew and Gentile that Jesus is the Christ, the Eternal God, manifesting Himself unto all nations. And now if there be fault, it be the mistake of men; wherefore condemn not the things of God, that ye may be found spotless at the judgment seat of Christ.

Here is no dark insinuation; no reference to some other author for a moto; no explanation wanted; no; all is clear: “Condemn not the things of God, that ye may be found sp0otless at the judgment seat of Christ.” How pleasant and happy would have been the situation of millions of mankind, if they had followed such good instruction as this? Alas! whenever I hear a man judge the book of Mormon before he has read it, I fear be will be found spotted at the judgment seat of his holy Judge!

I think the saints—all honest men, who read the book of Mormon for the truth’s sake, will agree with me in saying, that it is one of the best books in the world. I care nothing about the folly of the slanderer, bawling “Jo Smith!” “false prophet!” “mormonites!” &c. For all any charge or law suit, they have prefered against Joseph Smith jr. he remains unharmed, and like one of the children cast into the fiery furnace,his garments have not the small of fire. False prophet seems to stick to them that cried it so vehemently, and the saints gain as the spring verdure after a goodly shower. The book of Mormon, is just what it was when it first came forth—a revelation from the Lord. The knowledge it contains is desirable; the doctrine it teaches is from the blessed Savior; its precepts are good; its principles righteous; its judgments just; its style simple, and its language plain: so that a way-faring man, though a fool, need not err therein.

I am sensible that many err as to the great value of this book, for wan of proper knowledge concerning it; or, through a lack of faith in the power and goodness of God. If men would reflect a moment, then humble themselves before the Lord, and ask in faith, they might be satisfied that the Book of Mormon is a “heavenly treasure,” and as estimable in its holy precepts and examples for salvation, as the holy bible. A comparison of the two will prove this. If the majority of mankind would give as much credit to the statements of their fellow beings who certify to the truth of this book, as they do to the foolish lies that are put in circulation by wretches of no character, they would believe it upon testimony. Not a few, then, but thousands, would rejoice and say, truth is light, and light comes from God.

The revelation to the “Three Witnesses,” is one of great importance; it simply shows how the Lord gave them a view of the plates, and other sacred things. It is as follows:

“Behold I say unto you, [Oliver Cowdery, David Whitmer and Martin Harris,] that you must rely upon my word, which if you do, with full purpose of heart, you shall have a view of the plates, and also the breastplate, the sword of Laban, the Urim and Thummim, which were given to the brother of Jared upon the mount, when he talked with the Lord face to face, and the miraculous directors which were given to Lehi while in the wilderness, on the borders of the red sea; and it is by your faith that you shall obtain a view of them, even by that faith which was had by the prophets of old.

And afrer that you obtained faith, and have seen them with your eyes, you thal testify of them, by the power of God; and this you shall do that my servant Joseph Smith, jr. may not be destroyed, that I may bring about my righteous purposes unto the children of men, in this work.

And ye shall testify that you have seen them, even as my servant Joseph Smith, jr. has seen them, for it is by the power that he has seen them, and it is because he had faith: and he has translated the book, even that part which I have commanded him, and as your Lord and your God liveth, it is true.

Wherefore you have received the same power, and the same faith, and the same gift like unto him; and if you do these last commandments of mine, which I have given you, the gates of hell shall not prevail against you; for my grace is sufficient for you: and you shall be lifted up at the last day. And I, Jesus Christ, your Lord and your God, have spoken it unto you, that I might bring about my righteous purposes unto the children of men. Amen.”

This revelation is complete: The testimony it bears of the book of Mormon—“it is true”—is enough; it is eternal, and the rivers, and mountains; yes, the earth and the heavens are witness. When this novelous, and adulterous generation is lost among its abominations, as an evil mass, unfit for the glory of God, the book of Mormon will be one of the precious things which will continue among the righteous from generation to generation forever and ever. The freedom of soul should be enjoyed by all on earth, as well as the freedom of speech. This life is short, but the next is eternal: wherefore I am anxious that all that will may come to the knowledge of the truth, as it is in Christ Jesus, and be saved from the calamities which await the wicked in this life; and the torment they must endure in a kingdom of no glory.

I need not bring line upon line; pre- [178] cept upon precept; truth upon truth; letter upon letter; argument upon argument; and witness upon witness, to prove the book of Mormon a revelation from God: It is a witness of itself: the light of heaven is manifest in it. One word about heaven: The Gentile world supposes heaven to be a great way off;—a place of spirits;—but I allow heaven to be near, and that it will be on land: In support of this, I shall quote the 85th Psalm:

“Lord, thou hast been favorable unto thy land: thou hast brought back the captivity of Jacob. Thou hast forgiven the iniquity of thy people, thou hast covered all their sin. Selah. Thou hast taken away all thy wrath; thou hast turned thyself from the fierceness of thine anger. Turn us, O God of our salvation, and cause thine anger towards us to cease. Wilt thou be angry with us forever? Wilt thou draw out thine anger to all generations? Wilt thou not revive us again: that thy people may rejoice in thee? Shew us thy mercy, O LORD, and grant us thy salvation. I will hear what God the LORD will speak: for he will speak peace unto his people, and to his saints: but let them not turn again to folly. Surely his salvation is nigh them that fear him; that glory may dwell in our land. Mercy and truth are met together; righteousness and peace have kissed each other.

Truth shall spring out of the earth; and righteousness shall look down from hraven. Yea, the LORD shall give that which is good: and our land shall yield her increase. Righteousness shall go before him; and shall set us in the way of his steps.”

From this Psalm, I draw a conclusion, that the Lord will bless the land, and bl3sess the saints upon it, with all the good things that will gladden the heart, delight the eye, please the taste, and happify the soul; yea it will be the garden of Eden—a paradise on earth. For tidings so glorious: a system so expansive; a plan so noble; and a prospect so congenial with my feelings, I am willing to acknowledge myself indebted to the revelations of God, contained in the bible, the book of Mormon, the book of commandments and all other good books, which alike have come and will come unto the world, by the gift and power of the Holy Ghost. I glory in revelations from the Lord, and think when the prophecy of good old Jeremiah is fulfilled, the earth will be filled with knowledge which will be revealed. It reads:

But I will close my quotations for the present. The vexations and perplexities which seem to be the lot of this generation, are tolerable strong evidence of what is at hand; and as, in trouble, and tribulation, and calamities; and glory, and honor, and power, every part strengthens a part, as signs to them that believe, so do all these things foretell that the coming of the Lord is nigh.