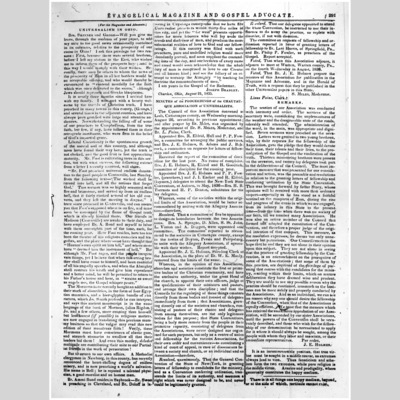 Brs. SKINNER and GROSH—Will you give me leave, through the medium of your paper, to add my mite to the good news occasionally contained in its columns, relative to the prosperity of our cause in Ohio? I ask this privilege for two reasons: First, because there were several brethren, before I left my station in the East, who wished me to inform them of the prospects here; and in this way I would comply with their wishes. Secondly, there may be others to whom the news of the prosperity of Zion in all her borders would be an acceptable offering, and who would thereby be encouraged to “contend manfully for the faith which was once delivered to the saints,” although Jews should reproach and Greeks blaspheme.

It is nearly three months since I arrived here with my family. I was met with a hearty welcome by the friends of Christian truth. I have preached in many towns in this county, (Geanga,) and several times in the adjacent counties, and have always been gratified with large and attentive audiences. Notwithstanding the falling off of some of our preachers to Campbellism, from the true faith, but few, if any, have followed them in their retrograde movement, who were firm in the belief of God’s impartial grace.

Liberal Christianity is the spontaneous growth of the mental soil of this country, and although tares have found their way here, yet the truth is not choked, and the good fruit is fast approaching maturity. Mr. Foot is cultivating tares in this section, but with what success, the following extract from a letter I recently received, will show.

“Br. Foot preached universal endless damnation to the good people in Centreville, last Sunday, from the following text—‘The wicked shall be turned into hell, and all the nations that forget God.’ This sermon was so highly seasoned with fire and brimstone, and served up from an endless hell, that it fairly choked several of his old converts, and they left the meeting in disgust.” I have since preached in Centreville, and can assure you that Foot’s supposed wheat is on fire, and must soon be consumed by the flame of Gospel truth which is already kindled there.

Our friends in Madison (Centreville) are awake to their duty, and have employed Br. A. Bond and myself to labor with them one-eighth part of the time, each, for the coming year. Here Foot resides, here too has been the theatre of his religious comedies and tragedies, and the place where some have thought that “Heaven’s own spirit on him tell,” and where more have “deemed him the instrument of hell.” But although Mr. Foot rages, and the people imagine vain things, yet I believe that when this erring brother shall have come to himself, and been convicted of his ungodly speeches, and when the Almighty shall restrain his wrath and give him repentance and a better mind, he will be permitted to return to his Father’s house and hear, in “strains as sweet as angels use, the Gospel whisper peace.”

The Mormons have recently bought an addition to their stock of absurdities, in the form of four Egyptian mummies, and a hieroglyphic bundle of characters, which Jo. Smith pretends he can interpret, and says this ancient manuscript is in the same language of the book of Mormon, (alias Rigdon.) Jo. and a few others, more cunning than himself, but less honest (if possible) in religious matters are now engaged in translating this precious mummy business so that the vulgar may read this new edition of their monstrous faith! Verily, these Mormons must have consciences of elastic gum, and staunch stomachs to swallow all that their leaders bid them!

And even this motley, deluded multitude are contributing their mite to our Partialist friends in the work of persecution!

But to return to our own affairs. A Methodist clergymen in Newburg, in this county, has recently renounced the heart-chilling dogma of endless misery, and is now preaching a world’s salvation. His name is Bell; he is reputed a talented physician, a good moralist and an honest man.

Br. Ammi Bond resides in Saybrook—Br. Sweet is preaching in Cleaveland, and Br. Doloff is laboring in Cayahoga county—so that we have five Universalist preachers within thirty-five miles of this city, and yet the “far west” presents opportunities for more laborers who will lay aside the creeds and doctrines of men, and proclaim the more substantial realities of love to God and our fellow-beings. If this country was filled with such preachers, pure and undefiled religion would more abundantly prevail, and soon supplant the contending isms of the day, and our brethren of every name and creed would soon acknowledge that the whole duty of man is comprised in love to our Creator and all human kind; and see the fallacy of an attempt to worship the Almighty “by teaching for doctrine the commandments of men.”

I am yours in the Gospel of the Redeemer.