Complaints of a Mormonite 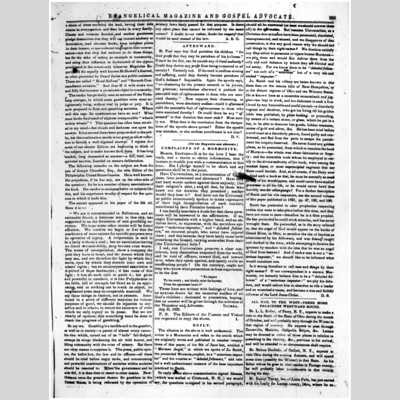 [ For the Magazine and Advocate.]

COMPLAINTS OF A MORMONITE.

Messrs. EDITORS—It is for the love I bear the truth, and a desire to obtain information, that I venture to trouble you with a communication at this time. But I pledge myself to be short, and any questions shall be to the point.

Have Universalists, as a denomination of Christians, been persecuted and slandered?

Have they had hard words spoken against them unjustly, (for their religion’s sake,) and all that, by those who knew not the doctrine they preached; neither would they hear it? And have not the Universalist public unanimously spoken in terms expressive of their high disapprobation of such conduct, manifested by their Partialist brethren?

I can hardly entertain a doubt but that these questions will be answered in the affirmative.

If so, ought Universalists with a higher hand, and an obdurate heart, to stigmatize, with the merciless epithets “notorious impostor,” and “deluded followers,” an innocent people, who never have injured them; and this because they have lately come forth preaching the Gospel, varying somewhat from their (the Universalists) faith?

I ask, can Universalists preserve a clear conscience, keep themselves unspotted from the world, and be void of offence, toward God, and toward man, when they speak against, and openly revile an unoffending people? On the contrary, ought not they who know what persecution is from experience, to be the first

To the needy; and kindly raise the burden From the oppressed heart?”

These lines are written with feelings of love, and an anxious desire for the immortal welfare of all God’s children: dedicated to yourselves, hoping, that an answer will be given through the columns of the Magazine and Advocate.

P. S. The Editors of the Pioneer and Visitor are requested to copy the above.

The allusion in the above is well understood. The writer is a Mormonite and refers to the article which we originally wrote and published in number twenty-three of this paper, of the 6th of June last, entitled a “Mormon Angel,” in which we spoke of Jo. Smith, the pretended Mormon prophet, as a “notorious impostor” and his votaries as “deluded followers,” and related a well authenticated instance of the base imposture practiced by Smith.

In reply to the above communication signed Idumea, (which was mailed at Colebrook, N.H.,) we would say, the questions contained in his second paragraph, should all be answered (at least we should answer them all) in the affirmative. But because Universalists, as a Christian denomination have been persecuted, slandered, misrepresented, and abused, and we disapprove of that persecution, is this any good reason why we should not call things by their right names?

We disclaim entirely any disposition to persecute or injure honest Mormons—we pity them and would fain deliver them from the silly and mad delusion by which they are blinded and led astray. For we know them to be “deluded followers” not only of a “notorious” but of a very vile and wicked “impostor. ”

Jo. Smith and his villainy are better known in this State than on the remote hills of New Hampshire, or in the distant regions of Ohio and the Western States. He is known here as a miserable mountebank and juggler—too lazy to work, and too dishonest to seek a livelihood by any honorable and useful pursuit—a disorderly vagrant and deceiver, who got his living till his golden bible was published, by glass looking, or pretending, by means of a certain stone, or glass, which he put in a hat, to be able to discover lost goods, hidden treasures, mines of gold and silver, &c. He has been tried before a civil court as a disorderly person, found guilty and condemned, and fled from the parts to escape the punishment his iniquity deserved. He never found any golden plates, as he pretended, from which to translate the book of Mormon—the whole was sheer fabrication or forgery; and the miserable tools whom he employed to certify to the divine authority of his book, were among the weakest dupes, or most unprincipled vagrants that our State could furnish. And, at all events, if the Deity ever indited such a book as that, he must be mentally as weak as any of his worshippers, and could never have studied grammar in all his life, or he would never have thus horribly murder edlanguage! For a further description of Smith and his vile imposture, see the second volume of this paper published in 1831, pp. 47, 120, and 198.

Smith has pretended to utter prophecies respecting events that were to take place before this time, and they have not come to pass—therefore he is a false prophet. He has pretended he could work miracles, and has never wrought them. He pretended, as in the story referred to, that the angel of God would appear on the banks of Grand River, in Ohio, to sanction the rite of baptism as administered by his followers, and was himself caught and ducked in the river, while attempting to deceive the ignorant by-standers with the idea that he was an angel of God from heaven! And if such a man is not a “notorious impostor,” we should like to be informed what would constitute one.

Is it wrong therefore to call men and things by their right names? If our correspondent is a sincere Mormonite, we honestly believe him to be a “deluded follower” of a “notorious impostor:” we pity his delusion, and would exhort him to abandon so vile a leader and so wretched a cause, and become a true and faithful follower of the Lord Jesus Christ.