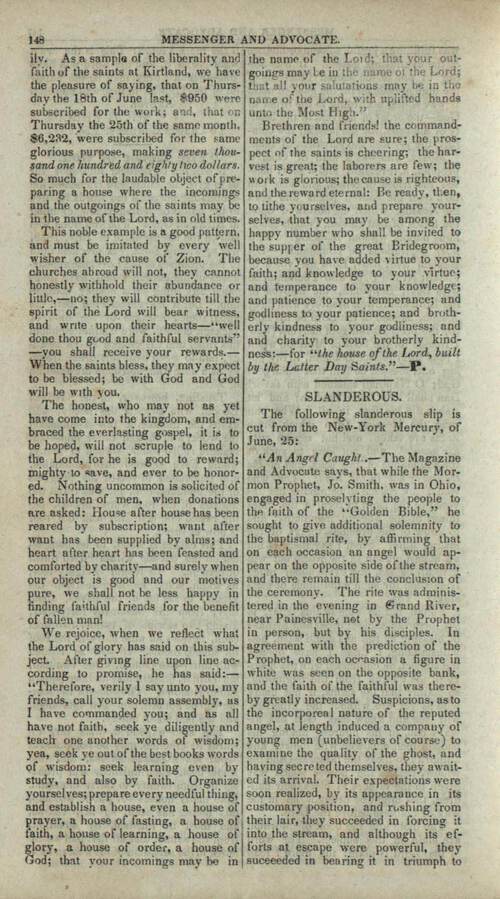 The following slanderous slip is cut from the New-York Mercury, of June, 25:

“An Angel Caught.—The Magazine and Advocate says, that while the Mormon Prophet, Jo. Smith, was in Ohio, engaged in proselyting the people to the faith of the “Golden Bible,” he sought to give additional solemnity to the baptismal rite, by affirming that on each occasion an angel would appear on the opposite side of the stream, and there remain till the conclusion of the ceremony. The rite was administered in the evening in Grand River, near Painesville, not by the Prophet in person, but by his disciples. In agreement with the prediction of the Prophet, on each occasion a figure in white was seen on the opposite bank, and the faith of the faithful was thereby greatly increased. Suspicions, as to the incorporeal nature of the reputed angel, at leangth induced a company of young men (unbelievers of course) to examine the quality of the ghost, and having secreted themselves, they awaited its arrival. Their expectations were soon realized, by its appearance in its customary position, and rushing from their lair, they succeeded in forcing it into the stream, and although its efforts at escape were powerful, they suceeeded in bearing it in triumph to [148] the opposite side of the stream, when who should this supposed inhabitant of the upper world be, but the Mormon Prophet himself!— Rochester Rep.”

There are, in our day, many kinds of craft; some have but a small, while others have a large support. Some have many advocates while others have few; but among them all, one would suppose that the great Babylon, spoken of in the Apocalypse, might be found—that notable city, which is to fall in one hour, while the inhabitants of the earth lament and mourn.

I do not suppose that the Messenger and Advocate will fall into the hands of but a few, if any, of those who severally read this ridiculous falsehood in the “Magazine and Advocate,” which appears was the first to give it publicity; neither the patrons of the “Rochester Republican,” (which I did believe possessed too much patriotism and liberality to give any attention to such a tale without proof,) and the “Mercury” which eagerly follows; but that a few thousand, among the many, may know that it adds another to the numerous catalogue, framed by designing men, and put in circulation by them and their dupes, and that it is noticed enough to be contradicted.

It may be distinctly understood that Joseph Smith, jr. the translator of the book of Mormon, has, since the winter of 1831, resided in the State of Ohio, and for the most part of the time, within nine miles of Painesville; and had any occurrence of the kind ever transpired, it would have been proclaimed, through this region, upon the house tops;—and further, that he never baptized any one, neither were he present when an individual was baptized, into this church, near Painesville. It carries the stamp of its author upon the face of it.

Every well-wisher of his fellow-men will say at once, that such reports are only put forth with a design to calumniate the innocent and abuse the public, by forestalling their opinion before a man can be heard, or his character and principles known. Are the editors of either of those papers acquainted with the character of Joseph Smith, jr.? Whether they are or are not, I venture to say, that it is as good in the sight of either God or man as theirs. Did they ever see him? Were they present on the occasion of which they have mentioned? Or have they seen a person who says he was? I venture to say, again, that if they are acquianted with the one who reported the lie, he is among that class who think scandal no harm, nor falsehoods upon the innocent, a crime; and if they have seen the man who says he were present when such an occurrence transpired, or even heard Mr. Smith make or give such a promise to any one, they have given publicity to the falsehood of an individual who was ready to laugh them in their face for their credulity, and blush at their folly.—C.