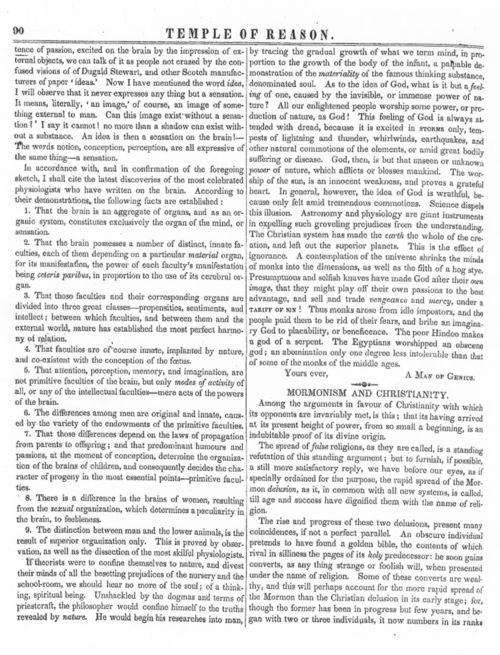 Among the arguments in favour of Christianity with which its opponents are invariably met, is this; that its having arrived at its present height of power, from so small a beginning, is an indubitable proof of its divine origin.

The spread of false religions, as they are called, is a standing refutation of this standing argument; but to furnish, if possible, a still more satisfactory reply, we have before our eyes, as if specially ordained for the purpose, the rapid spread of the Mormon delusion, as it, in common with all new systems, is called, till age and success have dignified them with the name of religion.

The rise and progress of these two delusions, present many coincidences, if not a perfect parallel. An obscure individual pretends to have found a golden bible, the contents of which rival in silliness the pages of its holy predecessor: he soon gains converts, as any thing strange or foolish will, when presented under the name of religion. Some of these converts are wealthy, and this will perhaps account for the more rapid spread of the Mormon than the Christian delusion in its early stage; for, though the former has been in progress but few years, and began with two or three individuals, it now numbers its ranks [90] twenty thousand people, has eight hundred priests, and has enlisted the powerful aid of the press to disseminate its dogmas, and its disciples own more land and more of this world’s goods than all the Christians of the first century.

Here is a glorious start; and when to this is added the fact, that the Mormonites work miracles, and in the nineteenth century, heal the sick, walk on the water, [or rather drown in it] and call down angels, or up, as the case may be, we hazard nothing in saying that a little persecution is alone wanting to place Mormonism on a footing with Christianity, if not in advance of it; its progress thus far compared with the progress of Christianity in the same time, would certainly warrant the latter opinion, and point out Jo Smith and his followers, as dangerous rivals to the son of Mary and the fishers of Galilee.

But, some of the people before whom these miracles are performed, do not believe them genuine, are become so uncharitable as to expose the fraud, and laugh at the performers; and so far are they from honouring the apostles of this new religion, as men divinely inspired, they pity them as deluded, and call them vagabonds. Here the coincidence holds good, for thus were the christians treated by the Jews, who derided the pretended Messiah, sent expressly for their conversion, but who has, by some sad mistake, or miscalculation, converted any and every body else, but these “lost sheep of the house of Israel.”

A century or two hence, when Mormonism shall have extended its conquests to the Sandwich islands, or been driven from the United States to seek converts on the shores, and amid the sands of Africa, these miracles will serve their purpose well, like all other sects:

“They will have miracles, aye! sound ones too,

Seen! sworn! attested! every thing but true;” and if they shall have the power necessary to the proper establishment of a new religion, they may defy contradiction, and burn down all opposition. With these facts before their eyes, will any be so hardy as to say, that the height to which Christianity, or Mohamedism have attained, is a proof of divine origin, or supernatural aid?

Christianity rose in the dark ages, when learning was confined to the few, and those few the professors of the new religion. [Query the latter proposition.] Mormonism has arisen, and so far flourished, in an enlightened age, when the rays of knowledge have fallen on the minds of all; when the discoveries of Science have shaken to their foundations the thrones of hierarchies, and toppled to their fall the fabrics of ancient superstitions. Christianity made slow progress till “the powers that be,” were enlisted on its side, and the sword of the emperor was a much more powerful instrument for its advancement, than the eloquence or the arguments of the priest, or the sublimity of his theme. Mormonism flourishes without such assistance, amid the scoffs, the sneers, and the hatred of enlightened Christians; and above all, Christianity soon boasted a god for its founder, while Mormonism has but a humble mortal for its head, born, for aught we know, in the usual way; though the time may come, when he too, may be deified, or the world at least be amused with the cry—God is great, and Jo Smith is his prophet.

What a melancholy theme for reflection is here opened to the contemplative mind: that in this day of light, in this country, where the mind of man is free to inquire unto all subjects, so ridiculous a scene should be enacted, so silly a doctrine should find believers and advocates, and so shallow an imposter, dupes and followers.

Let us hope that it will serve at least this one useful end: to cause the adherents of other superstitions to look to the foundation of their faith and see how much firmer they stand than this which they are so ready to stigmatise as a delusion; and when they see, as they cannot fail to see, the striking similarity in the origin of all religions, that they will seek in Free Inquiry a solution of their doubts.

Then will the Sun of Reason dawn on their minds, and the mists of superstition will flee at his approach; Mormonism and Christianity will shrink into their native insignificance, and the mind of man, freed from the shackles of ignorance and priestcraft, will be free to roam untrammeled through the beautiful and boundless fields of knowledge.

“Then wars shall cease, and ancient frauds shall fail,

And man to man for ever be the friend.”