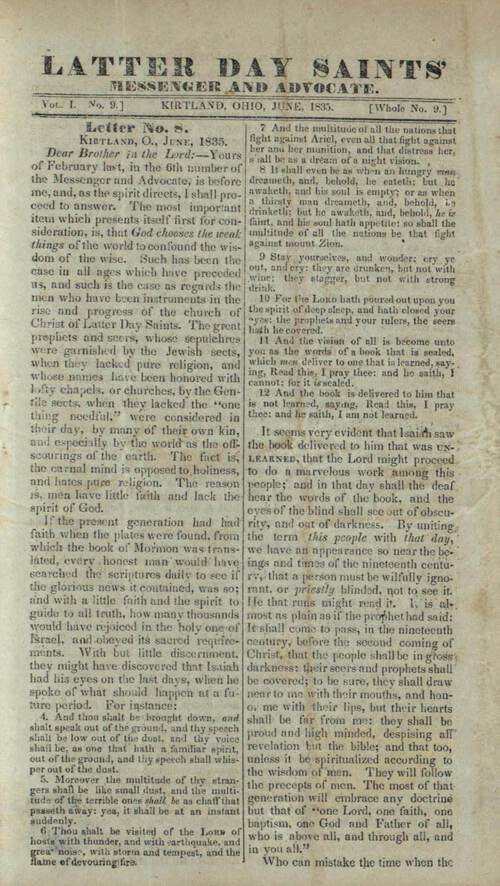 Dear Brother in the Lord:—Yours of February last, in the 6th number of the Messenger and Advocate, is before me, and, as the spirit directs, I shall proceed to answer. The most important item which presents itself first for consideration, is, that God chooses the weak things of the world to confound the wisdom of the wise. Such has been the case in all ages which have preceded us, and such is the case as regards the men who have been instruments in the rise and progress of the church of Christ of Latter Day Saints. The great prophets and seers, whose sepulchres were garnished by the Jewish sects, when they lacked pure religion, and whose names have been honored with lofty chapels, or churches, by the Gentile sects, when they lacked the “one thing needful,” were considered in their day, by many of their own kin, and especially by the world as the off-scourings of the earth. The fact is, the carnal mind is opposed to holiness, and hates pure religion. The reason is, men have little faith and lack the spirit of God.

If the present generation had had faith when the plates were found, from which the book of Mormon was translated, every honest man would have searched the scriptures daily to see if the glorious news it contained, was so; and with a little faith and the spirit to guide to all truth, how many thousands would have rejoiced in the holy one of Israel, and obeyed its sacred requirements. With but little discernment, they might have discovered that Isaiah had his eyes on the last days, when he spoke of what should happen at a future period. For instance:

6 Thou shalt be visited of the LORD of hosts with thunder, and with earthquake, and great noise, with storm and tempest, and the flame of devouring fire.

9 Stay yourselves, and wonder; cry ye out, and cry: they are drunken, but not with wine; they stagger, but not with strong drink.

10 For the LORD hath poured out upon you the spirit of deep sleep, and hath closed your eyes: the prophets and your rulers, the seers hath he covered.

11 And the vision of all is become unto you as the words of a book that is sealed, which men deliver to one that is learned, saying, Read this, I pray thee: and he saith, I cannot; for it is sealed.

12 And the book is delivered to him that is not learned, saying, Read this, I pray thee: and he saith, I am not learned.

It seems very evident that Isaiah saw the book delivered to him that was UNLEARNED, that the Lord might proceed to do a marvelous work among this people; and in that day shall the deaf hear the words of the book, and the eyes of the blind shall see out of obscurity, and out of darkness. By uniting the term this people with that day, we have an appearance so near the beings and times of the nineteenth century, that a person must be wilfully ignorant, or priestly blinded, not to see it. He that runs might read it. It is almost as plain as if the prophet has said: It shall come to pass, in the nineteenth century, before the second coming of Christ, that the people shall be in gross darkness: their seers and prophets shall be covered; to be sure, they shall draw near to me with their mouths, and honor me with their lips, but their hearts shall be far from me: they shall be proud and high minded, despising all revelation but the bible; and that too, unless it be spiritualized according to the wisdom of men. They will follow the precepts of men. The most of that generation will embrace any doctrine but that of “one Lord, one faith, one baptism, one God and Father of all, who is above all, and through all, and in you all.”

Who can mistake the time when the [129] vision of all has become unto this people as the words of a book? No candid person, if he has nothing to judge from but the testimony of such as hate the truth, and will believe a lie that they may be condemned.

It is a happy circumstance for the saints, that God brings to pass all his works after the counsel of his own will. For, if it were otherwise, if the contending sectarians failed to drive men to worship with them, Tom Payne’s Age of Reason, or Volney’s Ruins might as well be considered the standard of religious worship as the bible.—No one, according to the present precepts of men, and their belief; could get faith enough to ask God for any thing, or receive any more revelations; and consequently the truth would fail; the godly man perish, and wickedness prevail tenfold worse than it did before the flood.

Such an unhallowed age and circumstances of men and things, being among the possible impossibilities, let us rejoice, that the work of God, though at first almost imperceptible, continues to roll on, conquering and to conquer, and will continue its progression, till every knee shall bow and every tongue confess that the truth is mighty and will prevail; yea, till the earth shall rest from the convulsions of wickedness, and again become the garden of Eden.

The Lord is not in a hurry, neither is he slack; His work goes on, and though his way is past finding out, while a time for repentance to man is granted, and any are spared from the consumption decreed, some will turn to the words of eternal life, for life and salvation, whether they are found in the old bible, book of Mormon, lost book of Jasher, or the book of Enoch, mentioned by Jude. Though men are afraid of the books of God, or afraid that God will suffer any more to be in the world, I expect that when the dead, small and great, stand before him, that the books will be opened; even the books of Jehovah, and men will be judged according to what is written in the books.

I am truly glad you have mentioned Michael, the prince, who, I understand, is our great father Adam. New light is occasionally bursting in to our minds, of the sacred scriptures, for which I am truly thankful. We shall by and bye learn that we were with God in another world, before the foundation of the world, and had our agency: that we came into this world and have our agency, in order that we may prepare ourselves for a kingdom of glory; become archangels, even the sons of God where the man is neither without the woman, nor the woman without the man in the Lord: A consummation of glory, and happiness, and perfection so greatly to be wished, that I would not miss of it for the fame of ten worlds.

Notwithstanding your nine questions may be in the breasts of many saints; yet thousands of your readers may not understand them: therefore let me repeat them and give such answers as may be drawn from scripture.

Firstly, “Are the angels in glory the former prophets and servants of God?” Yes, or how could Elijah come before the great and terrible day of the Lord, to turn the hearts of the fathers to the children, &c. Peter, James and John saw Elias, along with Moses, in the mount.

Secondly, “Are they brethren of those who keep his commandments on earth?” Certainly: for, if Michael, Moses, Elias, and others through whom the commandments came, are joint heirs with Christ, they are brethren, and so also, will they be, who by keeping his commandments, obtain the like precious faith: The angel said to John—“for I am thy fellow servant, and of thy brethren the prophets, which keep the sayings of this book ”

Thirdly, “Have brethren and fleshly kindred, in the kingdom of God, feelings of respect and condescension enough to speak to each other, though one may be in heaven and the other on earth?” Yes, for they are ministering spirits sent forth from God to minister to the heirs of salvation. Enoch and Elijah are fleshly kindred in heaven, and every time they or others have visited the earth to speak to their fellow servants, if it was no more than to warn Joseph in a dream to flee into Egypt with the young child Jesus, if shows they have condescension enough to speak to each other.

Fourthly, “If angels are ministering spirits sent forth to minister to those who shall be heirs of salvation, will they not minister to those heirs?” Most certainly: Every angel’s visit from Abraham till the last, proves this ques- [130] tion, besides the Lord says he will send his angels with the great sound of a trumpet and they shall gather his elect together, from the four winds, from one end of heaven to the other.

Fifthly, “If they do will any one know it?” From the record of those that have come in times past, we should judge that the saints would know it, and Cornelius knew it before he was born into the kingdom.

Sixthly, “Will Michael, the archangel, the great prince, stand up in the last days for Israel?”

Seventhly, “Will he defend them from their enemies?”

Eighthly, “Will he lead them as they were once led?”

I shall proceed to answer these four last together. Daniel says:—“And at that time shall Michael, stand up, the great prince, which standeth for thy people: and there shall be a time of trouble, such as never was since there was a nation, to that same time; and at that time shall thy people be delivered: and if they are delivered they will undoubtedly be defended from their enemies. If Joshua saw the captain of the Lord’s hosts; or, if Nebuchadnezzer, in his astonishment, exclaimed, seeing with is own eyes in the daytime, “Lo, I see four men, [three only were cast into fire] loose, walking in the midst of the fire, and they have no hurt: and the form of the fourth is like the Son of God!” then in very deed shall the saints see father Adam, the ancient of days, even Michael the archangel, on the earth.

But lest I should go too far on this sublime subject, I must stop for the present, and leave many things in your letter not even hinted at.

I greatly rejoice at the light of the last days, and sincerely wish all men were fit and willing to receive it, that the glorious day might roll on when we might not only find sacred records by the ministering of angels, but might have the presence of Jesus again on earth; & be living witnesses of that day, when the knowledge of the Lord shall cover the earth as the water covers the sea; when all shall know him, from the least even to the greatest; and all the redeemed multitude speak a pure language, according to the promise. Such a glorious prospect of holiness is worth living for, or worth dying for, and I beseech the saints to strive to continue to walk in the way and obtain their crown. As ever,

P. S. I am apprised of the fact that you have resigned the editorial chair. I hope you will, however, continue your history of the rise and progress of the church. This, because you are as well, and perhaps I may say, better acquainted with the circumstances and facts relative to the subject, than almost any other member, that I am acquainted with. Again, it will be important in order to assist Elder Whitmer in keeping the Messenger and Advocate in its present interesting channel, as a messenger of truth, and advocate of the fulness of the gospel of Jesus Christ.