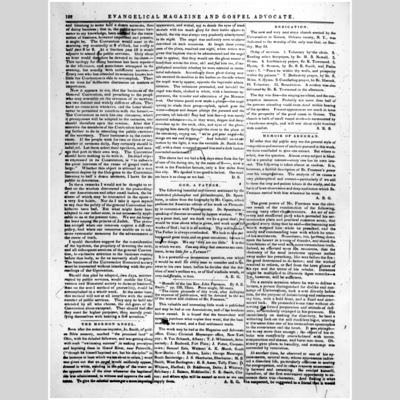 Soon after the notorious imposter, Jo. Smith, of golden Bible memory, reached “the promised land” in Ohio, with his deluded followers, and was getting along with such “swimming success” in making proselytes and baptising them in Grand River, near Painsville, (“though he himself baptised not, but his disciples” in the instance at least which we are about to relate,) word was given out that an angel would uniformly appear, dressed in white, standing in the edge of the water on the opposite side of the river whenever the baptismal rite was administered, to witness and approve the ordinance. To give the celestial messenger a more imposing appearance, and withal, not to dazzle the eye of weak mortals with too much glory for their feeble organs to behold, the rite was always very prudently administered in the night. The angel was uniformly seen as above described on such occasions. At length three young men of the place, resolved one night, when notice was given that baptism was to be administered and the angel was to appear, that they would see the ghost nearer at hand than across the river, ah! and feel him too, if tangible, and ascertain whether he were material or immaterial substance. Accordingly these ghost-daring mortals secreted themselves in the bushes on the side where the angel was to appear, opposite the baptismal administration. The ordinance proceeded, and behold! the angel was there, clothed in white, with a luminous appearance, the wonder and admiration of the Mormon host. Our triune guard now made a plunge—the angel sprung to elude their grasp— splash, splash goes the water—deeper and deeper plunge the pursued and the pursuers; till behold! they had him fast—it was surely material substance—in, in they went, deeper and deeper—clear up to the neck, chin, and eyes of the ghost, dragging him directly through the river to the place of the ceremony, crying out, “we’ve got your angel—his wings are wet and dripping.” And behold! on examination by the light, it was the veritable Jo. Smith himself, with a sheet wrapped around him and a dark lantern concealed underneath!

The above fact we had a few days since from the lips of one of the daring trio, by the name of S——, now at work in the Frankfort furnace, only a few miles from this city. We deemed it too good to be lost. Our readers have it as cheap as we had.