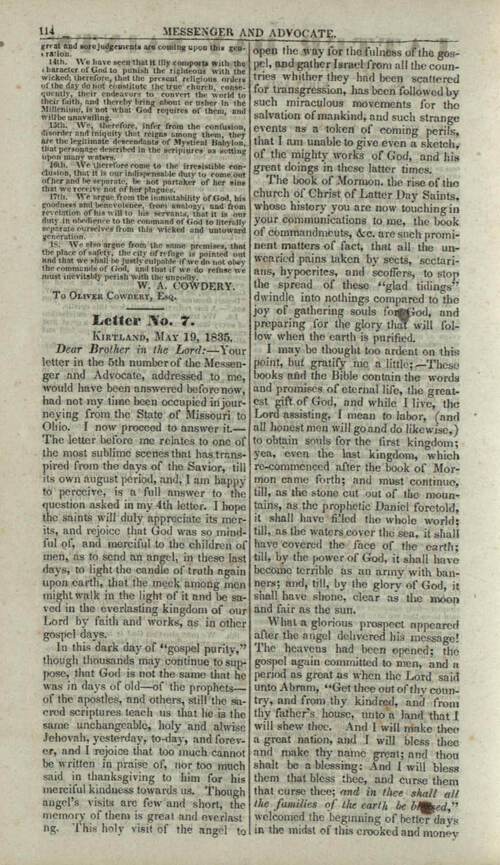 Dear Brother in the Lord:— Your letter in the 5th number of the Messenger and Advocate, addressed to me, would have been answered before now, had not my time been occupied in journeying from the State of Missouri to Ohio. I now proceed to answer it.—The letter before me relates to one of the most sublime scenes that has transpired from the days of the Savior, till its own august period, and, I am happy to perceive, is a full answer to the question asked in my 4th letter. I hope the saints will duly appreciate it merits, and rejoice that God was so mindful of, and merciful to the children of men, as to send an angel, in these last days, to light the candle of truth again upon earth, that the meek among men might walk in the light of it and be saved in the everlasting kingdom of our Lord by faith and works, as in other gospel days.

In this dark day of “gospel purity,” though thousands may continue to suppose, that God is not the same that he was in days of old—of the prophets—of the apostles, and others, still the sacred scriptures teach us that he is the same unchangeable, holy and alwise Jehovah, yesterday, to-day, and forever, and I rejoice that too much cannot be written in praise of, nor too much said in thanksgiving to him for his merciful kindness towards us. Though angel’s visits are few and short, the memory of them is great and everlasting. This holy visit of the angel to open the way for the fulness of the gospel, and gather Israel from all the countries whither they had been scattered for transgression, has been followed by such miraculous movements for the salvation of mankind, and such strange events as a token of coming perils, that I am unable to give even a sketch, of the mighty works of God, and his great doings in these latter times.

The book of Mormon, the rise of the church of Christ of Latter Day Saints, whose history you are now touching in your communications to me, the book of commandmeuts, &c. are such prominent matters of fact, that all the unwearied pains taken by sects, sectarians, hypocrites, and scoffers, to stop the spread of these “glad tidings” dwindle into nothings compared to the joy of gathering souls for God, and preparing for the glory that will follow when the earth is purified.

I may be thought too ardent on this point, but gratify me a little;—These books and the Bible contain the words and promises of eternal life, the greatest gift of God, and while I live, the Lord assisting, I mean to labor, (and all honest men will go and do likewise,) to obtain souls for the first kingdom; yea, even the last kingdom, which re-commenced after the book of Mormon came forth; and must continue, till, as the stone cut out of the mountains, as the prophetic Daniel foretold, it shall have filled the whole world; till, as the waters over the sea, it shall have covered the face of the earth; till, by the power of God, it shall become terrible as an army with banners; and, till, by the glory of God, it shall have shone, clear as the moon and fair as the sun.

What a glorious prospect appeared after the angel delivered his message! The heavens had been opened; the gospel again committed to men, and a period as great as when the Lord said unto Abram, “Get thee out of thy country, and from thy kindred, and from thy father’s house, unto a land that I will shew thee. And I will make thee a great nation, and I will bless thee and make thy name great; and thou shalt be a blessing: And I will bless them that bless thee, and curse them that curse thee; and in thee shall all the families of the earth be blessed,” welcomed the beginning of better days in the midst of this crooked and money [114] seeking generation.

For, as the angel informed our brother Joseph, that the Lord was about to proceed to do a marvellous work among this people, that Israel might be gathered and saved, so also was that glorious day shown when the Lord should come the second time to dwell on earth; yea, even come in the clouds of heaven, with all his holy angels with him, to execute judgment upon all, that the earth may rest; that righteousness may abound; that all flesh that is justified, may glorify God and enjoy his presence a thousand years.

Though, at the time the heavenly messenger came down to open the understanding of a few, and prepare the way for the true church to arise, and come forth as it were from the wilderness; yea, though at this time, the fathers had fallen asleep, and all things, seemingly but the gospel, remained as they were in other ages, and men that pretended to worship, did it as a mere matter of form, without authority or power, yet the “strange news” was believed by some, and hailed as the harbinger to prepare to gather the Lord’s elect; and in fact it was the day-break of a day of glory.

I was not a professor at the time, nor a believer in sectarian religion, but a believer in God, and the Son of God, as two distinct characters, and a believer in sacred scripture. I had long been searching for the “old paths,” that I might find the right way and walk in it, and after a suitable time to investigate the work, and prove its truth by corresponding evidence from the old bible, and by the internal witness of the spirit, according to the rules of holiness, I embraced it for the truth’s sake, and all honest men who seek a better world, will “go and do likewise.”

As soon as the “glad tidings” that an angel had visited the earth to prepare the way for greater light, &c. was whispered abroad, every impediment that Satan could lay in the way, and every foolish thing that a giddy headed generation cauld invent, were thrown out to hinder the spread of the truth, and discourage the saints; not entirely by the thoughtless and wicked, but by such as draw near to God with their mouths, and honor him with their lips. There seemed to be a continual dripping of slang, if I may use a figure, besides lawsuits, so that the saints have had to walk under scalding drops, and upon burning coals.

Here let us reflect, that when God graciously condescends to send an angel from heaven to earth, it augurs that a day of retribution is nigh; that a day of vengeance is coming, for so it has been in many ages of the world; at least, it has happened so times enough, for men to prepare to meet their God, when angels visit this world: Wherefore I can say as a humble follower of the meek and adorable Jesus, that before the fulness of the Gentiles is gathered in, calamities and tribulation may be expected: For when men will not reform by entreaty, they must be chastised with judgments. If the voice of the servants of Jesus Christ; if the voice of calamities; if the voice of angels; if the voice of reason and the voice of mercy will not call the children of men to repentance, I greatly fear, that the voice of God will bring them to judgment, when reformation is beyond their power, and, sorrowful to state, they will have to pay the uttermost farthing to a hard master, whose burden is heavy, and whose yoke is galling; and which must learn them by experience, that the wages of sin is death.

Tender my love to the faithful, beseeehing them to continue Godly minded and work righteousness till death, or till the Lord comes.