For the Messenger and Advocate 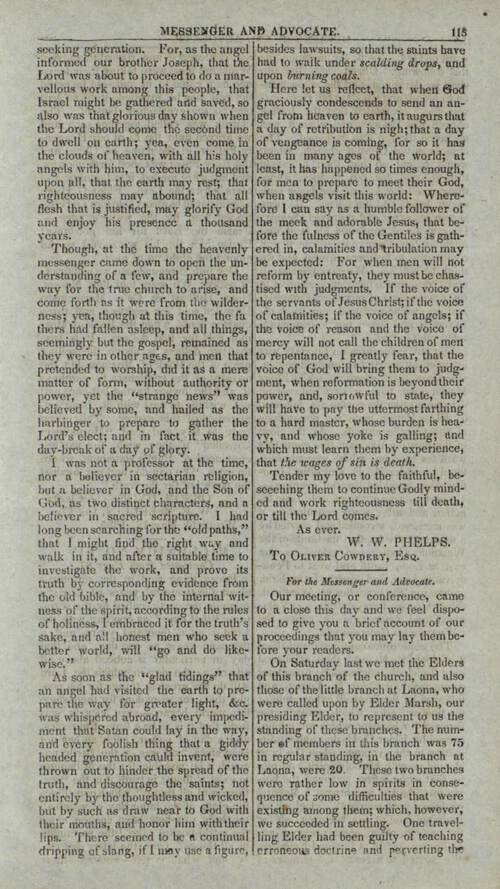 For the Messenger and Advocate.

Our meeting, or conference, came to a close this day and we feel disposed to give you a brief account of our proceedings that you may lay them before your readers.

On Saturday last we met the Elders of this branch of the church, and also those of the little branch at Laona, who were called upon by Elder Marsh, our presiding Elder, to represent to us the standing of these branches. The number of members in this branch was 75 in regular standing, in the branch at Laona, were 20. These two branches were rather low in spirits in consequence of some difficulties that were existing among them; which, however, we succeeded in settling. One travelling Elder had been guilty of teaching erroneous doctrine and perverting the [115] word of God. Such, for instance, as the following. Christ said, the sun shall be darkened, and the moon turned to blood, and the stars fall from heaven, &c. He stated that the Jewish church was the sun, and when it was scattered the sun was darkened. The moon was the Gentile church, which would be cut off and then it should turn to blood, &c. &c. besides, something about the Apocalyptic beast with seven heads and ten horns. He was shown his error and reproved sharply. He saw it and confessed his fault and made an humble acknowledgment and covenanted to be more careful, and we think he will be. We gave the church and Elders much instruction relative to the great points of our eternal interest, and we endeavored to do our work effectually and leave not a commandment unenforced.

Our public meeting, on Sunday, was attended by nearly five hundred people, who gave good attention, while Elder Marsh gave them a very interesting discourse upon the covenants, followed by Elder Patten upon the corruption of the Gentile church. At the close of the meeting this day, five came forward for baptism, which was administered by Elder W. E. McLellin.

Confirmation attended in the evening.—Monday morning, the church came together and after some consultation it was motioned, seconded and carried by a unanimous vote, that the limits of the Westfield Conference extend as far east as Lodi, south and west to Pennsylvania Line, and north to Lake Erie, embracing the branches at Westfield, Silver Creek, Perrysburgh, or Villanovia and Laona, to be called the “WESTFIELD CONFERENCE.”

The conference continued until about 2 o’clock P. M. and then adjourned until 3 o’clock, when public preaching commenced by Elder B. Young, and followed by the farewell exhortation of the twelve: after which seven came forward for baptism, which was administered by Elder O. Hyde, and confirmation in the evening, when the Lord blessed us with his holy spirit, and many that were infirm received the laying on of hands, and prayer. Meeting continued until nearly 12 o’clock. This morning nine of the brethren left for the east, to attend some previous appointments between this and Freedom: We tarried to arrange the minutes of our conference and record them,

&c. While the nine were taking their leave one man came to us and said he could not rest nor be satisfied, until he had obeyed the everlasting Gospel. The church was called together soon and we prayed unto the Lord our Heavenly Father, in the name of Christ and Holy Spirit was shed forth upon us, and all were melted into humility and tears before the Lord. Elder O. Hyde administered baptism unto him and confirmed him by the water’s edge.—Praise the Lord for his goodness: Praise him for his wonderful works among the children of men.

One little circumstance we will briefly notice: We were told Messrs. How, Hulbert & Co’s. Mormonism Unveiled sold for eighteen and three quarter cents, while the Book of Mormon sold for two dollars. It is true that two dollars is above the selling price of the Book of Mormon, but the anxiety of the gentleman to purchase it, and the owner having but one, and not wishing to part with it, is an explanation of this matter. Tell every body to buy and read “Mormonism Unveiled” if they wish, for we are convinced of Paul’s statement, where he says, “Ye can do nothing against the truth but for the truth.”